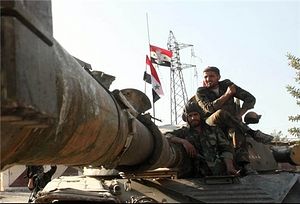 Syrian Army regained control of the ancient town of Sadad after days of intensive fighting with militants from al-Nusra terrorist group.

Around two thousand militants from the Al-Qaeda-linked al-Nusra Front stormed and occupied the ancient town of Sadad, 60 kilometers (37 mi) South of Homs, nearly a month ago and sieged its fifteen thousand residents to use them as human shields against the Syrian army, Al-Alam reported.

The militant groups who were driven out of Sadad were from the same groups that raided Syria's ancient Christian town of Maalula in Northeast of Damascus a couple of months ago.

Terrorists had taken Sadad to turn it into their stronghold for the al-Qalamoun war which both sides are getting ready for, an army member said.

Clashes between the army and militants in some Western and Northern parts of the town are still going on.

Sadad is a very old town and probably the one mentioned in the Old Testament under the name Zedad, translated as Sedada.

It is located on the edge of the desert and the community has remained predominantly Syriac Orthodox. Aramaic is still spoken there.