His Holiness Patriarch Kirill of Moscow and All Russia has appealed to the president of the Islamic Republic of Pakistan Mamnoon Hussain to grant pardon to Asia Bibi (Asia Noreen), a Christian woman who has been imprisoned and sentenced to death: 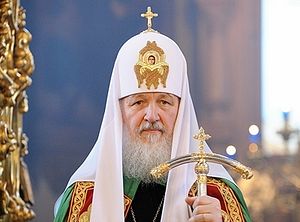 To His Excellency Mamnoon Hussain, the president of the Islamic Republic of Pakistan.

I have recieved with a deep sorrow the news that on September 16, 2014, the Lahore High Court upheld the death sentence that the lower court had passed upon the Christian woman Asia Bibi, a mother of five children, who had long been under arrest.

The execution of Asia Bibi not only will be an irretrievable loss for her family and relatives, but will also cause enormous damage to the Muslim-Christian dialogue and may give impetus to aggravated tensions between Christians and Muslims in Pakistan and all over the world. I feel certain that political leaders of any modern state should recognize their responsibility for the fate of representatives of the religious minorities they are entrusted with.

The Russian Orthodox Church is seriously concerned about this verdict. Our many-million strong flock is joining its voice to those of an enormous number of people worldwide standing up for saving the life of this Christian woman.

On behalf of all the faithful members of the Russian Orthodox Church I am asking you, Mr. President, to pardon Asia Bibi.

Yours faithfully, sincerely hoping for your mercy,

+Kirill, Patriarch of Moscow and All Russia. Pakistani authorities confiscate 10 properties from Christians
Pakistani Catholics are protesting against the confiscation of property from Christian communities in the Punjab province. reader basil11/10/2014 2:39 am
my wife and i have been praying for asi bibbi for years.may God bless patrirach kirill for this move and grant him many years!
×