V. Legoida says that the memorandum signed in the Western Ukraine indicates the difficult situation in those dioceses for the faithful

Earlier it became known that on November 13 in the Rivne region a document calling for the establishment of “the one Ukrainian local Orthodox Church” had been adopted on the local authorities’ initiative, reports RIA-Novosti. 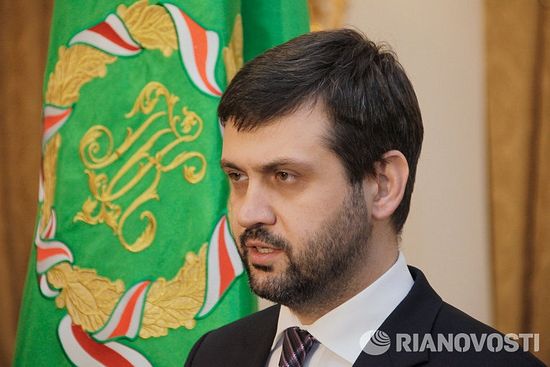 The appearance in the Rivne region of a memorandum calling for foundation of “the one Ukrainian local Orthodox Church” indicates the present difficult situation in western dioceses of the canonical Ukrainian Orthodox Church (UOC MP), said Vladimir Legoida, chairman of the Synodal Information Department of the Russian Orthodox Church, to the RIA-Novosti reporter.

Along with head of the Rivne state regional administration, representatives of the unrecognized “Kyiv Patriarchate”, as well as the Ukrainian Greek Catholic Church (the Uniates), the paper was signed by two representatives of UOC MP as well: by Metropolitan Anatoly of Sarny and Polissia and Metropolitan Bartholomew of Rivne and Ostroh.

“This document shows the extremely difficult situation of the dioceses and the faithful of the canonical Orthodox Church in the Western Ukraine. Such documents are obviously signed under a very strong political pressure,” V. Legoida noted.

“The so-called ‘Kyiv Patriarchate’ is splitting Ukrainian society through its open aggression, seeking to collect dividends from the difficult political situation and the people’s misfortune,” reads the official comment of Bishop Clement of Irpin, chairman of the Information Department of UOC MP.

Bishop Clement called “cynical” the current attempts of the “Kyiv Patriarchate”, “which is using administrative resources to make bishops of UOC MP pretend that there is no crude violation of rights of Orthodox believers in the Rivne region.”

According to him, “every day the Metropolitanate of Kiev receives appeals from residents of Polissia, Volhynia and Galicia, who are being deprived of their constitutional right to religious freedom.”

The Metropolitanate of Kiev (MP) has stressed that the Church Hierarchy of UOC did not give its blessing to sign the memorandum.

Vladimir Legoida has expressed his astonishment at the signature of one representative of the Ukrainian Greek Catholic Church at the Rivne memorandum, referring to it as to “a canonical nonsense”.

“If the Uniate Church members are declaring the necessity of establishing a single autocephalous Church in the Ukraine with their involvement, then, first of all, they must declare their cessation of liturgical and canonical communion with the Holy See [the Roman Catholic Church], and stop praying for the Pope during their services. Otherwise, their participation in this process is absolutely unclear. This is a canonical nonsense, an absurdity,” the agency’s spokesman added. War on religion: Orthodox Christian priests, churchgoers face threats in Ukraine
Ukrainian Orthodox Church of the Moscow Patriarchate has been receiving threats, including that of violence against the clergy, as radical nationalist movements try to take over churches and force them under the Kiev Patriarchate. Statement by the Synodal Information Department Regarding the Death of a Priest, and Threats to Religious Peace in Ukraine
The number of victims of the civil confrontation in Ukraine is multiplying every day. On July 31, a cleric of the Church of St. George in the Lugansk diocese, Archpriest Vladimir Kresliansky, died of wounds received during the shelling of residential areas of Lugansk. His five children have been left orphans. New reports are coming in about acts of violence against churches of the Ukrainian Orthodox Church and her clergy who have found themselves in a battle zone.
Comments
×