11 years since "March Pogrom" of Serbs in Kosovo

Tuesday marks the 11th anniversary of the large scale violence organized in Kosovo against Serbs, known in Serbia as "the March Pogrom." 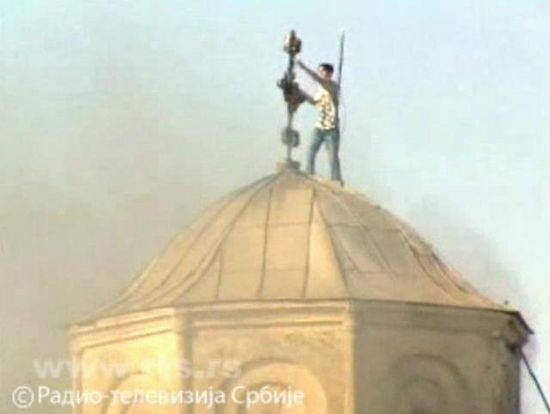 The two days of rioting and attacks resulted in the deaths of eight Serbs and 11 Albanians and injured 954 people.

4,012 Serbs were driven from their homes, more than 900 houses belonging to Serbs, Romas and Ashakalis were set on fire, while 35 Serbian Orthodox churches and monasteries were destroyed and desecrated.

Six towns and ten villages were ethnically cleansed during this time, and even 11 years afterwards, most of the Serbs driven out of their homes have not returned.

The rioting was preceded by an accident when three Albanian boys drowned in the Ibar river, with Albanian media accusing the local Serbs of "chasing them into the river using dogs."

A special OSCE report, to be presented on Thursday, notes that had there not been for the irresponsible and sensationalist reporting by the media, the violence "would not have been so intensive or brutal."

Ethnic Albanian extremists launched their protests on March 17, 2004 in the southern part of Kosovska Mitrovica, organizing an armed attack on Serbs in the northern part by the end of that day, when KFOR had to intervene.

Representatives of the international community said the ethnically motivated violence against Serbs was "well planned and orchestrated," but it turned out that more than 20,000 members of international forces "did not at first react adequately to prevent it."

The clashes in Kosovska Mitrovica claimed the life of Jana Tucev, while Borivoje Spasojevic died on the balcony of his apartment when he was hit by a shot from a sniper rifle. Dragan Nedeljkovic was killed in the Prizren Seminary when it was set on fire.

Dobrivoje Stolic and his son Borko were murdered in the village of Drajkovce. All Serb homes were set on fire in Gnjilane, where Boban Peric was killed. Slavoljub Dabic, another Serb victim, was beaten to death.

Jugoslav Savic was dragged out of his car in Kosovska Kamenica and severely beaten. He died of his injuries several days later in Vranje. 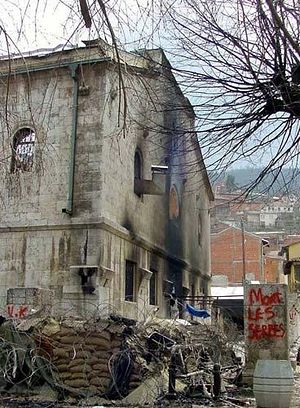 (Beta, file)
Smaller groups of Serbs sought shelter in KFOR bases, while others headed for safer enclaves. Most of those forced to leave their homes remain internally displaced in collective centers and container settlements in Kosovo, while some 250 are in central Serbia.

Of the 35 SPC churches and monasteries that were completely destroyed during the pogrom, 18 were monuments of culture, such as the UNESCO-listed Temple of Bogorodica Ljeviska in Prizren.

Extremists worked systematically for several hours, piling up car tires and setting them on fire, to destroy the 14th century church and with it some of the finest paintings from that era.

In response to the violence in Kosovo, protests were organized in several towns in central Serbia, including in Nis and Belgrade where rioters attacked and set on fire local mosques. 17 citizens and police officers were injured during the violence in Belgrade.

No one has been held responsible for organizing the most serious violence targeting Serbs since the end of the war and deployment of international forces in the province. Out of the 51,000 Albanians who took part in the rioting, 270 were arrested and 143 found guilty, most of whom were ordered to pay fines.

Skumbin Mehmeti was sent to prison for 30 years for opening fire on an UNMIK vehicle, killing one foreign and one Kosovo policeman, and wounding two others.

International prosecutors and judges launched seven cases related to the destruction of churches and sentenced 67 people to jail from 21 months to 16 years.

The terror perpetrated by Albanian extremists was condemned by the UN Security Council and the EU, while the Council of Europe Parliamentary Committee adopted a resolution in late April of the same year.

U.S. Admiral Gregory Johnson, who headed NATO Southern Command at the time, described the March 2004 riots in Kosovo as ethnic cleansing aimed against one nation and its history.

Then commander of SFOR in Bosnia-Herzegovina Virgil Packetl described the violence as "well organized," while Italian General Alberto Primiseri, who commanded KFOR's multinational brigade Southwest, told Italian media that Albanians "had a plan for the devastation of the province prepared." Two thirds of Kosovo-Metohija Serbs still in exile
Bishop Teodosije described as very promising the revival of the school of theology in Prizren, which currently has 37 students and eight lecturers, adding that two other schools of the Serbian Orthodox Church are expected to be revived in 2014.
Comments
×