According to the Rector of the Orthodox Church of the Nativity of the Mother of God in the Stenka village of the Buchach district of the Ukraine’s Ternopil region Priest Vasily Moysyuk, On Sunday, March 22 at 15:00, ten priests of the Ukrainian Greek Catholic (Uniate) Church organized a provocation near his parish church. 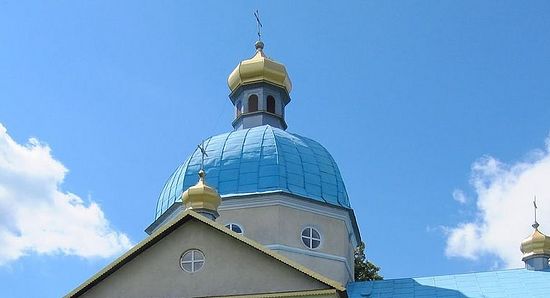 The Uniates’ actions were supported by deputy of the Buchach district council Andrei Buchinsky (the Svoboda (“Freedom”) Ukrainian radical nationalist party) accompanied by over 50 young people with “balaclava” helmets on their heads and dressed in camouflage, who called themselves “the Right Sector”, reports the website of the Ukrainian Orthodox Church (UOC MP).

The militants attempted to penetrate into the church, ostensibly for prayer. The faithful members of the village’s Orthodox community refused to let them in explaining that any person may enter the temple during service, but the house of God should be entered without weapons and with one’s face uncovered.

According to chief of the police of the Ternopil region Alexander Bogomol, 80 law enforcement officers had to go to the Stenka village to prevent the armed conflict on religious grounds (the same number of law-enforcers were deployed in Pochayiv as well).

He told a press conference that “the Right Sector” activists had arrived to support the Ukrainian Greek Catholic Church representatives.

A. Bogomol has reported that the local authority’s representatives promised to make efforts to provide an opportunity for both communities to worship in peace.

On the same day at about 17.30, Uniate priests and “the Right Sector” representatives gathered together near a local Uniate chapel, situated in the same village. During this assembly the extremists shouted insults at the Orthodox residents of the village and asserted that the Uniate priests would get inside the Orthodox Church of the Nativity of Holy Theotokos within several following days at any cost.