Hieromartyr Eusebius the Bishop of Samosata 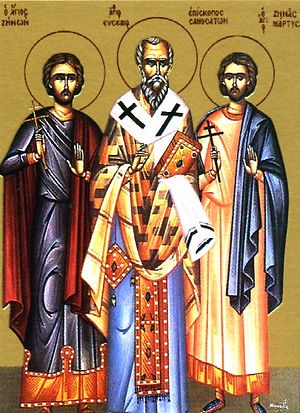 The Hieromartyr Eusebius, Bishop of Samosata, stood firmly for the Orthodox Confession of Faith proclaimed at the First Ecumenical Council at Nicea in the year 325. For this he underwent persecution by the Arians, being repeatedly deprived of his see and banished. The emperor Constantius (337-361), patron of the Arians, learned that St Eusebius kept a conciliar decree regarding the election of the Orthodox Archbishop Meletius to the See of Antioch. He commanded him to give up the decree. The saint boldly refused to do as ordered. The enraged emperor sent a message that if he did not give up the decree, then his right hand would be cut off. St Eusebius stretched out both hands to the emissary saying, “Cut them off, but I will not give up the Decree of the Council, which denounces the wickedness and iniquity of the Arians.” The emperor Constantius marveled at the audacity of the bishop, but did not harm him.

During the reign of Julian the Apostate (361-363), even more difficult times ensued, and an open persecution against Christians began. St Eusebius, having concealed his identity, went about in the garb of a soldier across the whole of Syria, Phoenicia and Palestine, urging Christians to the Orthodox Faith. He established priests and deacons in desolated churches, and he consecrated bishops who renounced the Arian heresy. After Julian the Apostate’s death, he was succeeded by the pious emperor Jovian (363-364), during whose reign the persecutions stopped. Returning from exile, St Meletius (February 12) convened a local Council at Antioch in the year 379 on the advice of St Eusebius. Twenty-seven bishops participated, and it reaffirmed the Orthodox teaching of the First Ecumenical Council. The Arians signed the conciliar definition, fearing the steadfast defenders of Orthodoxy, the holy hierarchs Meletius, Eusebius and Pelagios, who had great influence with the emperor. After the death of Jovian the Arian Vanlentus (364-378) came to power.

The Orthodox were again subjected to persecution. St Meletius was banished to Armenia, St Pelagius to Arabia, and St Eusebius was condemned to exile in Thrace. Having received the imperial decree, St Eusebius left Samosata by night so as to prevent tumult among the people that esteemed him. Having learned of of the bishop’s departure, believers followed after him and with tears entreated him to return. The saint refused the entreaty of those who had come, saying that he had to obey the authorities. The saint urged his flock to hold firm to Orthodoxy, blessed them and set off to the place of exile. The Arian Eunomios became Bishop of Samosata, but the people did not accept the heretic. The Orthodox would not go to the church and avoided meeting with him. The heretical Arian perceived that it was impossible to attract the independent flock to him.

The emperor Gracian (375-383) came upon the throne, and all the Orthodox hierarchs banished under the Arians were brought back from exile. St Eusebius also returned to Samosata and continued with the task of building up the Church. Together with St Meletius he supplied Orthodox hierarchs and clergy to Arian places. In the year 380 he arrived in the Arian city of Dolikhina to establish the Orthodox bishop Marinus there. An Arian woman threw a roof tile at the holy bishop’s head. As he lay dying, he asked her for wine and requested those around not to do her any harm. The body of St Eusebius was taken to Samosata and was buried by his flock. The saint’s nephew, Antiochus, succeeded him and the Samosata Church continued to confess the Orthodox Faith, firmly spread through the efforts of the holy Hieromartyr Eusebius.

By sharing in the ways of the Apostles, / you became you became a successor to their throne. / Through the practice of virtue, you found the way to divine contemplation, O inspired one of God; / by teaching the word of truth without error, you defended the Faith, even to the shedding of your blood. / Hieromartyr Eusebius, entreat Christ God to save our souls.

Podoben: “Today You have shown forth...” / You lived piously as a bishop, / and trod the path of martyrdom. / You extinguished idolatrous burnt offerings, / Hierarch Eusebius. / Since you have boldness before Christ God, entreat Him that our souls may be saved!