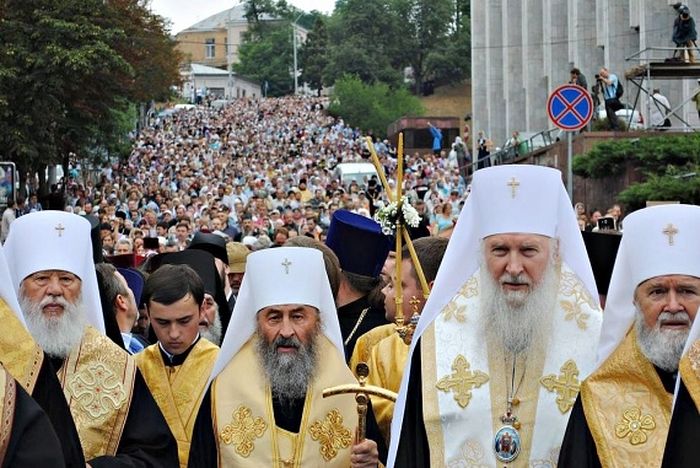 The Holy Synod of the Ukrainian Orthodox Church of the Moscow Patriarchate, which met on July 20, 2016, at the Holy Dormition Kiev Caves Lavra under the chairmanship of His Beatitude Metropolitan Onufry of Kiev and All the Ukraine, expressed its gratitude to archpastors, clergy and laity of UOC MP who have taken part in the organization and holding of the all-Ukrainian cross procession for peace in the Ukraine (minutes no. twenty-four), reports Patriarchia.ru.

The Holy Synod has also invited the President of the Ukraine Petro Poroshenko, the Ukrainian Prime Minister Volodymyr Groysman, the chairman of the Ukrainian Verkhovna Rada (Parliament) Andriy Parubiy, and head of the Kiev City State Administration Vitali Klitschko to take part in a prayer service on St. Volodymir Hill (“Vladimirskaya Gorka”), in a procession of the cross on July 27 in the Ukrainian capital and in other festivities marking the 1000th anniversary of the Baptism of Russia (Rus’). Heads of diplomatic missions of foreign states in the Ukraine have also been invited to participate in the traditional festive events dedicated to the Day of Baptism of Russia (Rus’).

With the blessing of the primate of the Ukrainian Orthodox Church, Moscow Patriarchate the all-Ukrainian cross procession started on July 3 from the Holy Dormition Svyatogorsk Lavra in the eastern Ukraine and on July 9 from the Holy Dormition Pochaev Lavra in the western Ukraine. The cross procession has gathered thousands of participants who are praying for peace in the Ukrainian land. The famous wonderworking “Pochaev” and “Svyatogorsk” icons of the Mother of God are being carried in both processions. These processions of the cross cover the territories of the Ukraine’s Donetsk, Kharkiv, Poltava, Cherkasy, Ternopil, Rivne, Khmelnytskyi, Zhytomyr and Kiev regions.

On July 27, the day before the celebration of the anniversary of Baptism of Russia and the feast-day of the Holy Prince Vladimir, the cross processions will meet in Kiev on St. Volodymir Hill. From there, after a traditional annual prayer service the procession participants will proceed to the Kiev Caves Lavra for festal church services.

On July 28 a Divine Liturgy will be celebrated in the square in front of the Lavra’s Dormition Cathedral.