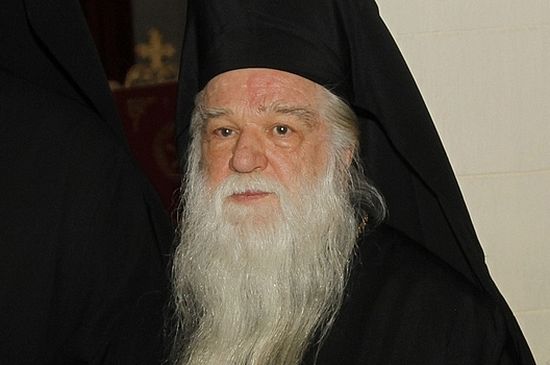 Metropolitan Ambrose of Kalavryta has blamed the Greek government for the cynical collapse of the agreements reached together with the primate of the Greek Church. Members of government promised at a meeting with hierarchs not to use the new educational materials and to begin to develop a program of religious education together with the Church.

Bishop Ambrose emphasized that despite the archbishop’s reassurances after his meeting with Prime Minister A. Tsipras that “the misunderstanding was removed,” the next day government officials had already begun to act as if there were no agreements, reports Agionoros, with reference to the Romfea agency.

“It’s obvious that the government is sneering at the Church! They have cynically deceived us!” declared Vladyka Ambrose. “We must understand that for the government the question of religious education is closed: it’s turning into a non-confessional subject where our Savior Christ is equated with Buddha and Mohammed.”

According to the metropolitan of Kalavryta, active resistance is the only appropriate response to the government’s actions: “I call you to battle for our faith! We will remember the Minister of Education’s words, promising to 'put an end' to religious education in the course of the year. Can we really allow this crime to be committed? Now above all—a battle!” Greece’s Archbishop: People Will Decide Church-State Relation
During his speech, Ieronymos alleged that the leftist government has a specific agenda to alter the Christian faith and to convert religious lessons in schools to an interfaith jumble.

Adwoa Nyantakyi10/22/2016 11:14 am
love has its powers in every ben adam that loves adonai with all of their heart and strength but the gift that we gif is not silver and gold which can be melted by the fire that test all things but as our names are being written in the book of life we are being sealed by the ruach haqodesh which is the seal of promise to malcut hashamayim. and their for the apostles ask the question as talmidim and nevim i know you have been baptized but on shavuot did you receive the baptism of teshuva which is the tongues of fire baptism for baptism with water in yeshua it is baptism with fire amen in the name of our one and only mediator and intercessor yeshua amen
×