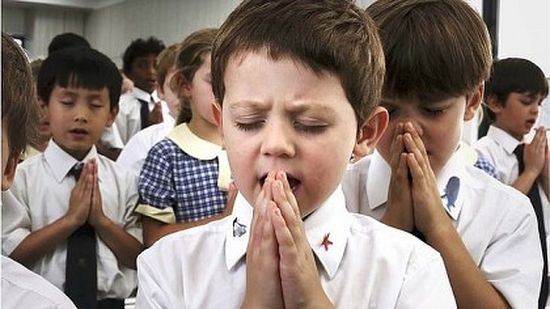 According to the new circular of the nations’ Ministry of Education, teachers’ and students’ joint morning prayers, beginning this year, have ceased to be mandatory in all educational institutions of Greece, reports RIA-Novosti, with reference to the Greek news agency Newsone.

Orthodoxy is the state religion in Greece; ninety-eight percent of its citizens belong to the Greek Orthodox Church. At the same time, the constitution guarantees freedom of religion for all citizens.

Before the beginning of the academic year all academic institutions of Greece received the circular from the Ministry of Education, which for the first time did not mention morning prayer. “The daily school program begins at 8 AM… At 8:10 after the bell the entrances are closed and the students gather in their assigned places, with all teachers supervising them,” states the ministry’s circular.

However, the Greek Orthodox Church insists that morning prayer in schools not be abolished. According to the statement of the Church’s Permanent Synod, common prayer amongst students and teachers is in accordance with that which was stipulated in a presidential decree of 1998, which has not been annulled.

On Monday, September 5, 2016 the first meeting of the Holy Synod of the Church of Greece took place under the chairmanship of His Beatitude Archbishop Ieronymos of Athens and All Greece, reports the Greek publication Romfea.

A special service for the beginning of the work of the Holy Synod was served before the meeting. Then His Beatitude Archbishop Ieronymos welcomed the new members of the Holy Synod and wished a prosperous outcome of their work in a spirit of love and cooperation.

One of the meeting’s key themes was that of common prayer in educational institutions.

“On the occasion of the beginning of the school year the Church of Greece urges all to pray to God that He would strengthen every member of the school communities—teachers, instructors, students, administrative representatives, and parents. In particular the Greek Church calls for prayer for the leadership of the Ministry of Education, that with its assistance Greek schools could stand against this universal crisis from which our people, a quality and comprehensive education, and support and optimism all suffer.

At the school desk is shaped our homeland’s tomorrow—brighter, knowing its history and glorious traditions, and ready to confront the modern world and not lose its identity.

We call upon Greek society to support every educational level by all possible means, considering it a matter of national importance.

In this matter the Church is always ready to help in promoting the intellectual development of our students, supporting them in all needs.

In particular, in accordance with article 13, paragraph 5 of Presidential Decree 201/1998 it is stipulated that “before the beginning of lessons, common prayer between students and teachers is to be carried out in the schoolyard. This responsibility is placed upon the teachers on duty…” Greek Church condemns martial arts in schools as draws kids into the Occult
Karate and all martial arts go against Christianity as they are based on the Eastern philosophies of Taoism and Zen Buddhism, hence they come in “direct conflict with the Orthodox Christian message of love.” mireille bachir9/9/2016 9:23 am
Greece is an Orthodox country.
The picture or image regarding "morning school cancellation programs reflect a roman catholic heresy.

Anthony9/8/2016 7:57 pm
And then they wonder why the country is in the state it's in. Greeks elect an avowed atheist clown intent on destroying the Church and its role in the life of Greece, whilst enslaving the nation to the fourth reich in Berlin. I would be beyond despair, had I not read the prophecies of St Kosmas Aitolos, St Paisios, Geronda Iosif etc. - who have all prophesied a resurrection of the nation once all the ''flotsam'' has been brought to the surface and then washed away. Unfortunately, there are major difficulties ahead before we reach that point, but then there is no Resurrection without Crucifixion. As Russia suffered so bitterly for turning her heart away from God and to mammon, so is our nation suffering the same fate. May God give all our people the strength to repent and return to Him.
×