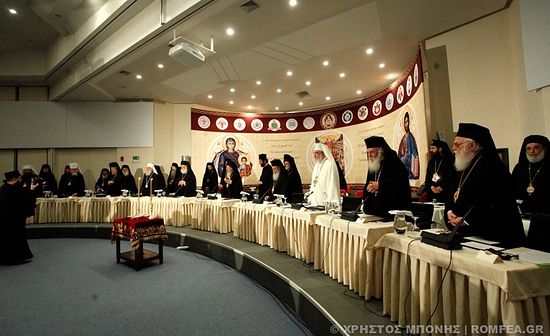 Agionorus.ru introduces readers to the conclusion of the commission of the Sacred Community of Mt. Athos on the results of the Crete Council. The document was sent to members of the Holy Community on November 13/26, 2016, but is being published only now.

1. Among the positive aspects of the Crete Council we can point to the possibility for freely expressing one’s opinion and the “exemplary conducting” of the sessions by Patriarch Bartholomew of Constantinople.

2. The majority of the bishops went to the council in order to “express the self-consciousness of the One, Holy, Catholic, and Apostolic Church, and not to welcome and support the ecumenicist position.”

3. “We cannot not note the brilliant attempt to improve the conciliar documents undertaken by the primates and members of the conciliar delegations.”

5. Athonite monks emphasize that the current divisions and conflicts within the Church “without a doubt contribute to allowing a dual interpretation of the texts of the Crete Council. The ambiguity of these documents creates the prerequisite for interpreting them in an ecumenical spirit and consequently pose a threat to the unity of the Church.”

In conclusion, the Sacred Community’s commission emphasizes that “the documents of the Crete Council must overcome their one-sidedness which is due to the neglect of the theological tradition, traced by the modern God-bearing elders and authoritative theologians, who have looked upon the path of ecumenical dialogue as an ecumenistic deviation from truth. Not only the so-called ‘zealots’ but also sound voices seek the words of truth, to find and ensure rest.”

6. The Athonites call the cessation of commemoration of the Church hierarchy “unjustified for now:” “The documents of the Holy and Great Council contain inaccuracies and deficiencies. However, no union was signed as at Lyons or Florence; not one Orthodox bishop fell into heresy as acknowledged by the Church.” The desire for mass non-commemoration “pleases only the enemies of the Church.”

7. “We look with hope for further theological revisions and more accurate formulations of the conciliar documents,” states the final proposition of the commission of the Sacred Community. Holy Monasteries of Mt. Athos respond to documents prepared for Pan-Orthodox Council
As have several hierarchs, priests, and theologians especially from the Churches of Greece, Bulgaria, Georgia, and the Russian Orthodox Church Outside of Russia, the Athonite fathers have responded seriously and urgently, calling attention to several problems.
Comments

Anthony1/13/2017 10:34 pm
1. Among the positive aspects of the Crete Council we can point to the possibility for freely expressing one’s opinion and the “exemplary conducting” of the sessions by Patriarch Bartholomew of Constantinople.

Is that why Chrysostomos of Cyprus signed on behalf of Mitr Neofytos, Athanasios et al. when they refused to sign the heretical trash?

Is that why Mitr Hierotheos of Nafpaktos stated after the bazaar/carnival that he and other Hierarchs who refused to sign were castigated and subject to threats and abuse (this by other bishops - men of the cloth who serve the Divine Liturgy remember!)

Is that why the heretical phanar threatened schism with the Hellenic Church if the Hierarchs did not defrock and laicize Mitr. Seraphim, Mitr. Amvosios and Pater Theodoros Zizzis - those troublemaking ringleaders for daring to oppose his heretical delusions!

Oh yes there was freedom alright. Freedom to profane the Church's teachings and mock Her in front of the world.
×