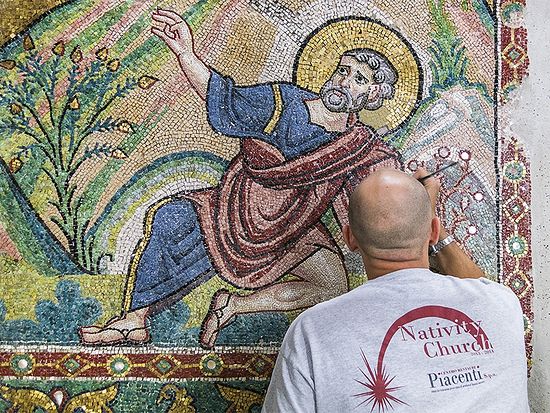 A restorer works on a wall of mosaic tiles in the Church of the Nativity in Bethlehem. Photo courtesy of Piacenti SpA

It is revered by different Christian sects and draws more than a million visitors to the Holy Land every year, making it the biggest tourist attraction in the Palestinian territories.

The Church of the Nativity, built by Roman Emperor Constantine in the fourth century, sits in Bethlehem above what’s believed to be the birthplace of Jesus in one of the most politically divisive regions of the world.

The church is administered jointly by Greek Orthodox, Syriac Orthodox, Roman Catholic and Armenian Apostolic authorities, and all have monastic communities there.

Since 2013, Italian experts from the art restoration firm Piacenti SpA have been working with the Palestinian government to overcome cultural and religious differences and forge ahead with an ambitious restoration expected to cost $15 million (14 million euros) when completed. 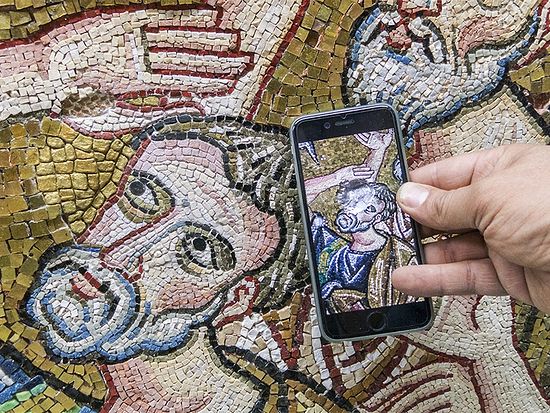 “For those who have faith, this is the place where God arrived on earth, born in a cave that really existed under this church,” Giammarco Piacenti, head of the project, told Religion News Service on a visit to Rome. “It was immediately venerated, so historically and archaeologically it is very important.”

Around 170 experts have been working on the restoration of the church’s ceiling, wooden architraves and walls for the past three years. During their research, they uncovered a mosaic angel, the seventh that still remains in the church, and cleaned and restored more than a million brilliantly colored tiny mosaic tiles. 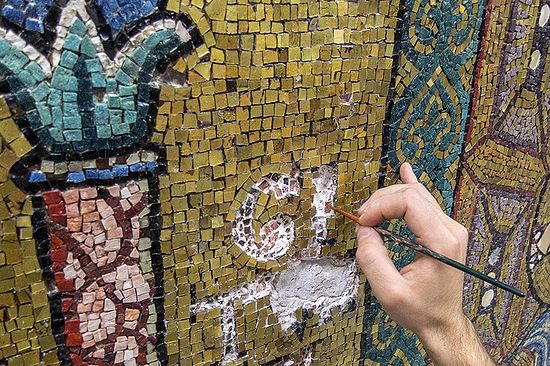 “This work has been made possible thanks to the collaboration of people from different companies, with different backgrounds and skills,” Piacenti said. “It’s also involved people of different religions, nationalities and cultures.”

The church was completed on Constantine’s orders in 339 A.D. but later destroyed during conflict in the sixth century. A new basilica was built by Byzantine Emperor Justinian I in 565 A.D. and lined with colorful wall mosaics much later, during the 12th century.

“The design of the transept is an example of exceptional craftsmanship, and so too are the mosaics, the columns, the capitals and the architraves,” Piacenti said. 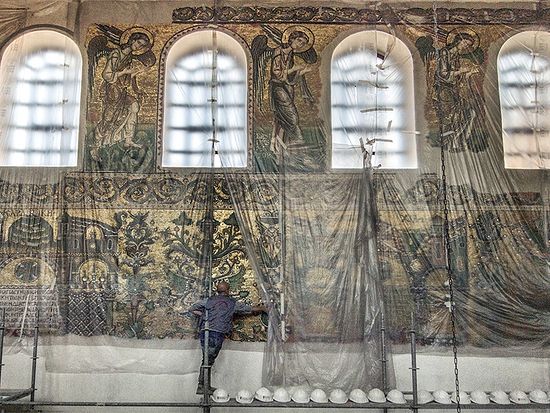 Over the years the structure has suffered from degradation and water infiltration. It was declared a U.N. World Heritage site in 2012 in a bid to save it from further decay and it’s also on the World Heritage endangered list.

“This church is a fortress that has survived attacks and 15 terrible earthquakes and it is still standing today,” he said. 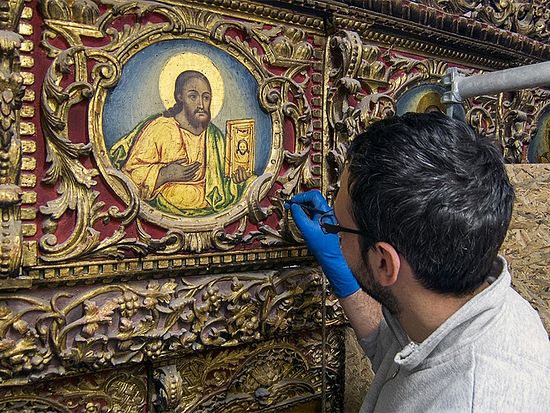 Around two-thirds of the work is finished; funds are being sought to help restore the 50 columns and the floor mosaics and for the installation of fire prevention and lighting systems.

The restoration is being funded by countries including France, Germany, Italy, Turkey and Morocco, as well as the Vatican. The project is expected to be completed in 2019. 'Sistine Chapel of the Early Middle Ages' buried for a millennium by an earthquake reopens
Church of Santa Maria Antiqua lay undiscovered for more than 1,000 years after it was buried by rubble from an earthquake