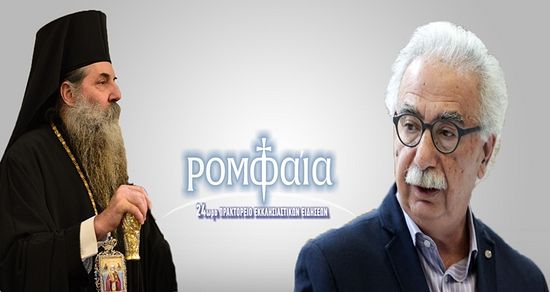 An open letter of Metropolitan Seraphim of Piraeus to Greek Minister of Education Konstantinos Gavroglou regarding a recent directive on sexual education has appeared on Romfea, with highlights published on Agionoros.ru.

In his missive, the hierarch of the Greek Orthodox Church protests the controversial order to “eradicate sexual prejudice” and “homophobia and transphobia” which was sent to all Greek schools, including those in his canonical territory.

According to the metropolitan, this is the first time Greek schools have received such a directive, trying to “distort the natural state of children,” undertaken without the consent of and in spite of the will of parents.

Addressing himself to Mr. Gavroglou, Met. Seraphim emphasizes that the order “promotes debauchery and perversion under the insincere and ridiculous pretext of progressiveness.”

Met. Seraphim informed the minister that he refuses to execute his directive in educational institutions within his diocese, and will place the question of its Church-wide discussion and condemnation at the next meeting of the Holy Synod of the Greek Orthodox Church.

Anthony1/25/2017 7:58 am
@TD - Greece is Orthodox in name only. Our nation abandoned God for mammon decades ago, and the result is there for all to see - a nation in complete freefall, economic, social and demographic collapse. Just as happened to Russia. This is what happens when we reject God. Degradation, enslavement and decline. And it is a forewarning of what will happen under Antichrist. Just as the EU promised Greece earthly prosperity, and instead enslaved her, so too will AntiChrist promise prosperity and enslave the world. The EU is just another forerunner.

T.D.1/24/2017 8:44 pm
How can such filth of immorality come from an Orthodox nation like Greece is beyond my understanding. What do they find so hard to comprehend that marriage is the is the union of one man and one woman, in in love and submission, respectively? How does Greece expect to not be overrun by the muslims if they will not obey God? People now are healthier and more well-fed than ever in history, but birth rates are worse than ever in history; how does the nation expect to survive?
×