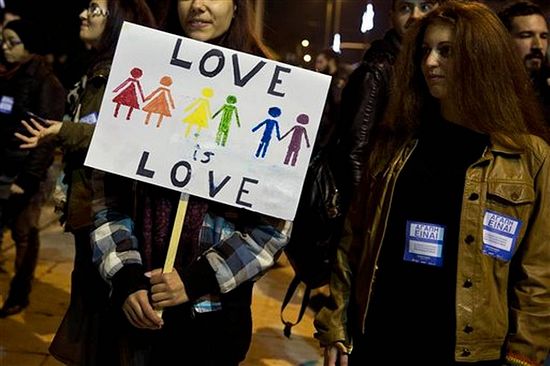 In a result announced early Wednesday, lawmakers voted 193-56 in favor of the bill to extend civil partnerships to same-sex couples, but provisions regarding family law that could pave the way for adoption applications by gay couples were dropped before the vote.

Conservative bishops in Greece's powerful Orthodox Church vehemently opposed the law, arguing that it undermined the institution of family.

"Homosexuality is a deviation from the laws of nature. It is a social crime, a sin. Those who experience or support it are not normal people," said Bishop Amvrosios of the southern town of Kalavryta, where church bells tolled Tuesday in opposition to the bill.

In a 2013 ruling, the Council of Europe's Court of Human Rights found that Greek legislation was discriminatory and ordered Greece to pay damages to the gay couples who brought the lawsuit.

Civil partnerships, introduced in 2008, are favored by couples seeking legal rights without getting married or who are deterred by lengthy divorce procedures. But same-sex couples were barred from civil partnerships.

Lawmakers from the governing leftist Syriza party backed the bill, standing to clap when it passed, while the main opposition conservatives were split on the vote.

The human rights group Amnesty International called the new law a "significant and historic step in the right direction."

Several hundred pro-gay rights protesters gathered outside parliament before the vote, under a large banner that read "Love is the law."

"This is a good start, even though this law doesn't cover everything," Philippos Paganis, a 21-year-old member of the gay rights group Colour Youth, told the AP.

"We want to keep up the pressure ... for same-sex marriages to be allowed — that gives you more rights — and to make it easier for people to declare their gender," he said.

The new legislation allowing civil partnerships for same-sex couples is expected to take effect early next year once it is published in the government gazette. Moving the Boundary Marker
Fr. Lawrence Farley
The question for Christians is this: is the apostolic Tradition which the Church has received authoritative, or not? Have we the authority to move the ancient boundary landmark which our fathers have set?

A French court recognizes a “neuter” gender
For the first time in history a French court has recognized existence of “a third gender”, complying with the request of a 64-year-old man who wished to remain anonymous.
Comments
×