A miracle of St. Nina 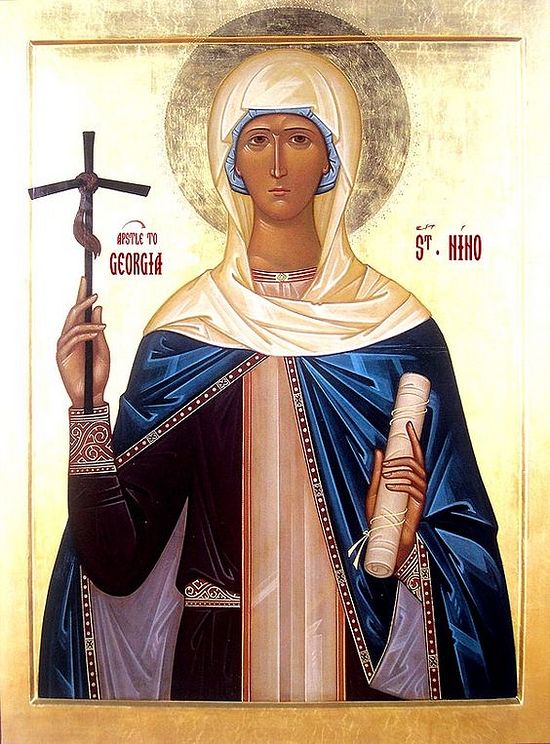 I was fortunate in 2002 to visit Archimandrite Hippolytus (Khalina), the abbot of the Rila Monastery near Kursk. Many would go to him for advice and spiritual fortification. And I went.

When we said goodbye to Batiushka, he gave me a paper icon of the Equal-to-the-Apostles Nina, which I keep as his blessing.

At that time I was laboring in Nikolo-Tikhon Monastery in Lukh. On the eve of the commemoration of the Equal-to-the-Apostles Nina I became so seriously ill that I couldn’t even raise myself from my bed—a temperature, I was shaking with fever, and every bone ached so much that I can’t even tell you. Even my eyes hurt. It happened suddenly. I lay alone in my cell, not knowing what to do.

The bells began to ring for Vigil and then I remembered that today is the commemoration of the Equal-to-the-Apostles Nina. After Fr. Hippolytus had given me her icon I began to venerate this saint and often turned to her.

Having gathered my last strength, I decided to go to church, figuring it’s no problem if I died: I’m in a monastery, and they can serve my funeral here. I wanted to go to one last service. And in this joyless state I headed for church.

When the anointing began, I was barely able to venerate the icon of the Equal-to-the-Apostles Nina, after which the abbot of the monastery Schema-Igumen Agafon (Chesnokov) anointed me with oil.

And immediately all my ailments disappeared! As if nothing had happened. Only a slightly ticklish throat remained.

I had a great Don Cossack friend in the monastery, Andrei Bagrov. He fought in Yugoslavia, Pridnestrovie, and other places in the early ‘90s. He was the kindest-hearted man, but with a very sober outlook on everything. I approached him, being under the impression that a miracle had just happened to me: after all, a moment ago I couldn’t even stand. My joy knew no bounds, as I told Andrei. Andrei gave me a once over, and with an absolutely straight face just said: “People come to the monastery and begin to look for a miracle, and then what to do with them? What are you talking about? You need to be calm about everything.”

But my change was obvious: I had just been barely able to move on my feet, but after I venerated the icon of the Equal-to-the-Apostles Nina and they anointed me with oil there was no trace of any ailment left. And all this was in a matter of seconds.

Holy Equal-to-the-Apostles Nina, pray unto God for us! Discovery at Gergeti Trinity church - An amazing story to tell on the day of Saint Nino
An ancient icon of St. Nino reappeared from under newer layers of paint in a Georgian mountain church.

The Life of St. Nina, Equal to the Apostles and Enlightener of Georgia
+ 335 AD, commemorated January 14/27
St. Nina was born in Cappadocia and was the only daughter of pious and noble parents—the Roman general Zabulon, a relative of the great martyr St. George, and Susanna, sister of the patriarch of Jerusalem. When St. Nina was twelve years old, she traveled with her parents to the holy city of Jerusalem.
Comments

Editor9/13/2021 5:43 pm
Rusich: We appreciate your suggestion. Because we do not have any direct information, we have to rely on open sources. We can enter a change to reflect your suggestion.

Rusich9/13/2021 2:16 pm
Editor: Unfortunately, you are mistaken. I am a citizen of Pridnestrovie and speak English, so I often read this version of the website. This term is deeply offensive not only for all parishioners of the Tiraspol-Dubossary diocese, but also for any Orthodox person. This word was introduced into circulation precisely as an insult during the war between Moldova and Pridnestrovie in 1992, and your link to Wikipedia, which also contains a lot of slander and blasphemy against the Russian Orthodox Church and Christianity in general, is puzzling. Please correct this misunderstanding on the articles. To be honest, I did not expect to see offensive and politically biased speech constructions on the largest Orthodox portal, moreover, on the English version.

Editor9/1/2021 9:29 pm
Rusich: The word Transnistria is the accepted translation for Приднестро́вская Молда́вская Респу́блика. Please see Wikipedia: https://en.wikipedia.org/wiki/Transnistria. Unless you are thinking of the Transnistria Governorate, there is nothing offensive about the term and it has nothing to do with Nazis.

Rusich9/1/2021 7:42 pm
Dear site administration! I urge you to correct the highly offensive word "Transnistria". I understand that most likely the text was translated by an automatic translator, but the Nazi insults on the Orthodox website are simply outrageous.