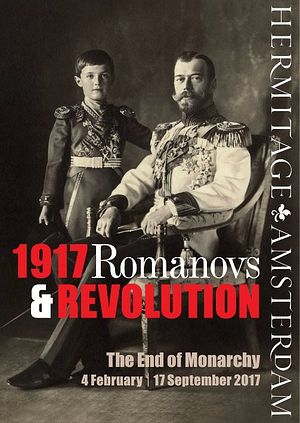 The Netherland’s Hermitage Amsterdam museum will be running the exhibition “1917. Romanovs & Revolution. The End of Monarchy” from February 4 to 17, featuring a number of the last royal family’s personal items, and one of the murder weapons used to martyr Tsar Nicholas II and his family. This will be the only showing of the exhibition in Western Europe.

In addition to over 200 objects from St. Petersburg’s State Hermitage Museum, Hermitage Amsterdam is also receiving dozens of historical documents from the Russian State Archive in Moscow to be displayed in the exhibition, including letters from Rasputin, love letters, the last dairies of the Royal Martyrs Nicholas and Alexandra, items from the royal wardrobe, and family photos and drawings from the Romanov children.

Also on display will be Tsar Nicholas’ official Act of Abdication, and one of the bayonets used to murder the sainted royal family in Ekaterinburg in July 1918.

The exhibition aims to “tell the gripping story of Tsar Nicholas II and his wife Alexandra and of the explosive political and social circumstances of Nicholas’s reign.”

A full press kit is can be viewed online. Archival Documents on the Murders of the Imperial Family Now Available Online
Paul Gilbert
Many of the documents were identified as a result of painstaking research in Russia’s state and departmental archives, as well as private archival collections abroad. The bulk of the material, however, was collected during the first investigation into the murder of the royal family in 1919, conducted on behalf of Kolchak investigator Omsk district court Nikolai Sokolov. Tobolsk Exhibition: The World of the Romanov Family Children
Paul Gilbert
The exhibition is based on a collection of photographs which belonged to the Empress Alexandra Feodorovna’s lady-in-waiting, friend and confidante Anna Vyrubova-Taneyeva.
Comments
×