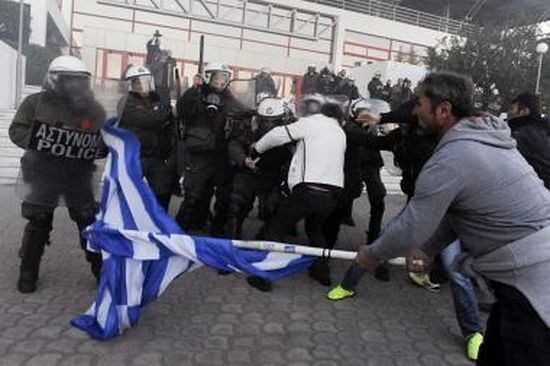 Greek police have arrested 26 protesters who yesterday raided the Greek Orthodox Cathedral in the northern city of Thessaloniki during Mass.

The culprits were protesting against a police operation in the city on Wednesday in which squatters and refugees were evicted from three illegally occupied buildings.

One of the buildings is the property of the Greek Orthodox church and the city's archbishop said that it is being demolished to build a hospice for the terminally ill. The archbishop said that the protesters "destroyed what they could" at the Cathedral yesterday, but did not elaborate.

The protesters threw leaflets around the Gregory Palamas Cathedral before those attending Mass managed to drive them out.

Police said that the group of those arrested, believed to be anarchists, consisted of 19 men and seven women. Seventeen were Greek and the others were from Germany, England, Austria, Switzerland and Morocco.

During Wednesday's police operation, 74 people had been arrested, 64 of them foreigners. Thirty-three refugees were released by police.

Early yesterday, an improvised device also exploded outside the offices of the construction company demolishing the church's property, but did little damage.

Thessaloniki is the second largest city in Greece after Athens. The Cathedral is named after a 14th-century archbishop of Thessaloniki. A mosque to be built in Athens – Parliament amends law
The Parliament of Greece has made amendments to the state’s legislation allowing the building of a mosque in Athens.
Comments

Stephan Kelian8/2/2016 11:49 pm
Will you please be so kind and stop calling an Orthodox service 'A Mass'.
It is a Liturgy and those who are not familiar with its meaning can always consult multiple sites on Internet.
As an Orthodox Christian believer I feel very uncomfortable with the inclination of some translators to adopt a Roman Catholic vocabulary in order to make the article easier to understand for the Western readers.

Anthony8/2/2016 3:01 pm
The foreigners should be given the boot, and the locals be sentenced to a lifetime of hard labour. Make them do something useful to society by rebuilding the shattered country which the EU has destroyed.
×