St. John Chrysostom—a Man Who Heard the Heartbeat of the Church

On January 27/February 9 the holy Orthodox Church celebrates the translation of the relics of the great hierarch and ecumenical teacher John Chrysostom, archbishop of Constantinople. His name is known by every Orthodox Christian, as the Divine Liturgy according to the order of St. John Chrysostom is served in all churches throughout the greater part of the Church year. 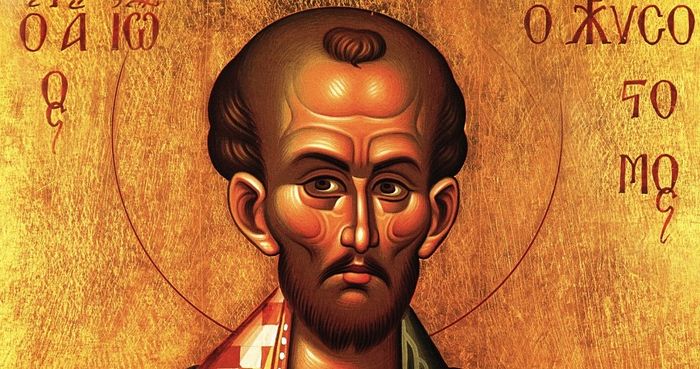 St. John was born in the middle of the fourth century in Antioch, in the fourth greatest city of the Roman Empire, in the center of Syria. There he became a priest.

At the end of the century, in 398, St. John was elected bishop of the Constantinopolitan see. To some he seemed a severe, withdrawn, and even stuck-up person. But this was far from true. Rather, he truly was severe—in the ascetic podvig of abstinence and prayer, withdrawn—he didn’t love entertainment and idle company, “stuck-up”—in unceasingly holding himself up to the high measure of the Christian life. He never demanded from others that which he himself did not do.

St. John Chrysostom became one of the most prolific Church writers. In the Russian translation his works take up twenty large volumes, each of which is divided into two (and some even into three) books. The lion’s share of the hierarch’s work is oral preaching, copied down by scribes and then edited by St. John himself.

St. John Chrysostom devoted especial attention to exegesis—to explaining the meaning of the texts of Sacred Scripture. His detailed commentaries on several Old Testament books—Genesis, the Psalter, Job, Isaiah, and also on the majority of the New Testament books—the Gospels of Matthew and John, Acts, and his commentary on all the epistles of the Apostle Paul have become real treasures of spiritual wisdom, which can be used by any Christian in studying the Bible. After all, St. John himself desired from his whole heart that every believer could know and understand these books.

St. John Chrysostom’s most important work is the order of the Divine Liturgy. Why is his role in the matter so great? After all, we know from Church history the names of those who also composed hymnography, sounding forth during the Divine services to this day. The answer to this question is simple, but assumes an understanding of the special place occupied by the Divine Liturgy among all the services of the Church.

One liturgist had some wonderful words: “In the Liturgy we hear the heartbeat of the Church.” As man cannot live without his heart, so the Church cannot be imagined without the Liturgy, because it is not without Christ. Believers commune of the Holy Body and Blood precisely during the Divine Liturgy, and the Church manifests itself in them, in the Holy Gifts. The Liturgy is the revelation of the Kingdom of God. 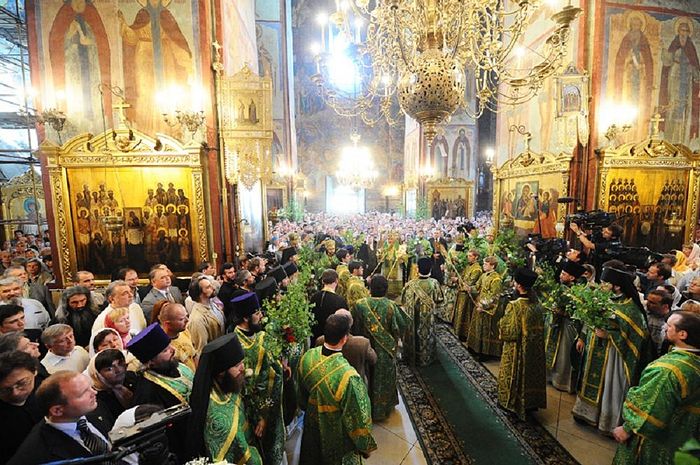 At the beginning of the Divine Liturgy, all the faithful hear the priest’s exclamation: “Blessed is the Kingdom of the Father and of the Son and of the Holy Spirit…” It is a sign that time and space are changing—the parishioners stand in a concrete church which becomes the upper room of the Mystical Supper, in which the Lord Jesus Christ, going to His voluntary suffering and death, celebrated the first Communion with the apostles…

The Liturgy is a manifestation of the unity of the Church of Christ. This thought is best of all expressed by the anonymous author of one of the oldest Christian texts, The Didache (The Teaching of the Twelve Apostles), written in Apostolic times: “As this broken bread scattered on the mountains was gathered and became one, so too, may Thy Church be gathered together from the ends of the earth into Thy Kingdom.” All believers, communing of the Body and Blood of Christ, become one with the Lord and with one another, glorifying Christ “with one mouth and with one heart.”

The Divine Liturgy is a testimony that Christianity is not a religion for separate individuals. It’s impossible to be a Christian outside the Church. It’s impossible to be a Christian without the Liturgy. Many of us have probably had to hear that widespread expression: “I believe, but I don’t go to church.” “I don’t go to church” means I don’t commune of the Body and Blood of Christ…

But imagine a family where one person would suddenly say to the rest: “I’m not going to live with you in one home anymore, I’m not going to speak with you, your joys and sorrows are no longer interesting to me. Although, maybe sometimes I’ll come over, but only when no one is here, so no one will bother me.” That’s what happens when someone “believes, but doesn’t go to church.” Partaking of the Body and Blood of Christ is a unique check on our Christianity. Communion is always the podvig of standing before Christ. With what will we come to Him? Metropolitan Anthony of Sourozh wrote: “The Liturgy is celebrated for the sake of the Body of Christ, a living organism… Therefore, its first action is to gather the people, not a crowd, but a community which stands before the face of God and can stand worthily before the face of God only when this community is an organism of love…” The Liturgy manifest the love of Christ for us.

What depth of faith and love for Christ did St. John Chrysostom have, taking upon himself the podvig of composing the order of the Divine Liturgy? Of course he used those liturgical texts which existed before him, but he created his own. Today the same prayers ascend in church which were sent up by St. John himself sixteen centuries ago.

… The best honor to the memory of St. John Chrysostom is our participation in the Liturgy, and communing of the Holy Body and Blood of Christ. After all, it wasn’t for himself that this great preacher composed the prayers that we hear in church, but for us, for those who come to the house of God to become participants in the Mystical Supper of Christ. Sermon of the Feast Day of St. John Chrysostom
Archbishop Pitirim of Volokolamsk

Sermon of the Feast Day of St. John Chrysostom
Archbishop Pitirim of Volokolamsk
Before his death, the saint thanked God for everything he had to experience. Why didn’t sickness and depravations break him, cast him into despondency, or incite him to complain? St. John Chrysostom and the Light of Tabor
Dr. Christopher Veniamin
A study of his sermon reveals the saint understood the light of Transfiguration as a manifestation of divinity—consistent with Orthodox theology as later more fully elucidated.
Comments
×