Sermon of the Feast Day of St. John Chrysostom 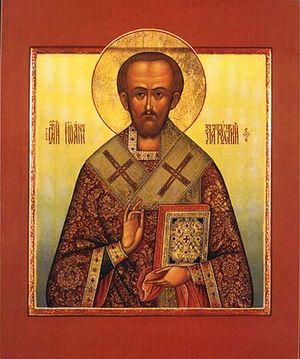 Today we celebrate the memory of the great holy hierarch and teacher of the Church, John, Archbishop of Constantinople. While he was yet a humble presbyter in Antioch, not seeking any glory or honor, weak in body and plain in appearance, he was great in spirit and strong in faith. No other man in Antioch gave such influential sermons as Chrysostom. His glory spread far beyond the country’s borders, and priest John was called in his fiftieth year to serve as hierarch of capital city cathedra of Constantinople. His sermons brought many sinners to righteous life. But certain members and clergymen of the imperial court, who hated him for his righteousness, became his fierce enemies. They finally had him condemned and exiled. Exhausted from physical sickness, the hierarch would have to travel a wearisome road through Asia Minor and the mountains of Armenia. Pushed onward by guards who did not know the meaning of compassion, he entered the Caucasus Mountain region and with great hardship reached the outskirts of modern-day Sukhumi. There, serving the Liturgy for the last time, he died with the words, “Glory to God for all things!”

Christ’s Church has not forgotten the spiritual ascetic labors of St. John Chrysostom. Almost every day in churches is celebrated the Liturgy that he composed; we hear his words every Paschal night—the call to enter into the joy of Christ’s resurrection. Over a thousand of his pastoral teachings and letters, his exegesis of the Holy Scripture, and his ascetic life have served for many centuries for the spiritual growth and salvation of the Church’s sons and daughters.

Before his death, the saint thanked God for everything he had to experience. Why didn’t sickness and depravations break him, cast him into despondency, or incite him to complain? Because for true confessors of Christ, physical suffering is gladness. Onerous trials and physical pain in the name of Christ purify the ascetic’s soul from attachment to earthly vanity, and exalt in it the measure of true values over illusory ones. In sorrows the desire weakens for non-spiritual consolations that corrupt the soul and burden the conscience, and make the heart vulnerable, ambitious, and weak. Sickness and depravation endured with prayer heal us of conceit and pride. This is why the Lord, Who outlined for his disciples the path of perfection, called those blessed who walk that path.

In praising the ascetic labors of the great holy hierarch, let us learn not to fear suffering brought upon us by physical pain, emotional sorrow, or insults. Let life’s vicissitudes not darken our souls; let joy abide in our hearts abundantly. Let us ask St. John Chrysostom for the gift of bright courage with which he himself went along his life’s path. Together with the great God-pleaser let us thank God for everything that happens to us, for everything God has given us in this life. Amen.

Saint John Chrysostom on the Truth of the Resurrection
St. John Chrysostom
And indeed when should they have stolen Him? on the Sabbath? And how? for it was not lawful so much as to go out. And even if they transgressed the law, how should they have dared, who were so timid, to come forth? And how could they also have been able to persuade the multitude? By saying what? By doing what?

A Day in the World of St. John Chrysostom
Priest Ioan Valentin Istrati
We live in a changing world. All around are life, death, the past, and old age, passing on from one stage to the next. People become what their parents were, children grow into youths and then into adults, the elderly depart to the earth, and all are pitilessly stalked by the specter of death.
Comments

Deacon Tariku 1/26/2017 2:32 am
hello dear
can I have some articles, book, and videos which show the teaching of orthodox about salvation
×