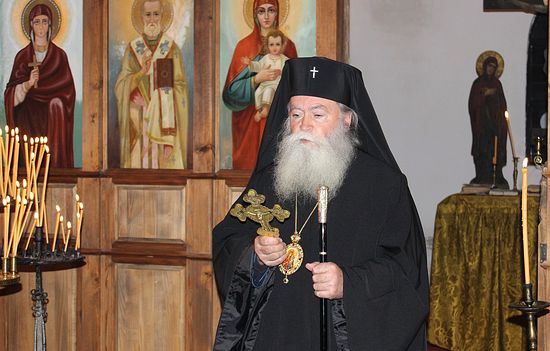 There is no way to overcome Church division than by repentance, as Metropolitan Gabriel of Lovech (Bulgarian Orthodox Church) stated in a recent interview.

“There is no grace of God in schism. And without the grace of God there can be no Church. People must return to the canonical Church, where there is the grace of God and where man can be saved. Schism is a very harmful and pernicious phenomenon,” the bishop stated to representatives of the Ukrainian Orthodox Church’s Information Department who were visiting Bulgaria from February 10 to 12.

The basis of any split is pride, Met. Gabriel emphasized, although of course anyone can return and confess and ask forgiveness at any time. “This is the only way—there can be no other, in my opinion,” he said.

“We wish happiness and peace and that the Ukrainian people would receive that which they deserve, to live with dignity and well, and that they would be a people rich both spiritually and materially,” the hierarch said in closing.

His Holiness Patriarch Neofit also assured that the entire Bulgarian Orthodox Church offers up prayers for the faithful suffering in Ukraine:

We, as Orthodox brethren, know and remember the words of the Savior, Peace I leave with you, my peace I give unto you. Every Orthodox Christian should remember counsel of the Lord Jesus and strive with all their might of their will to promote peace in our brotherly Orthodox Ukraine.

I have always had a very good relationship with His Beatitude Metropolitan Onuphry. We know that he loves the Ukrainian people and humbly labors for the good of Ukraine and all Orthodox Christians. We will be praying that the Lord grant him health and strength to successfully bear the obedience he was given by the Lord, and which he bears with dignity.