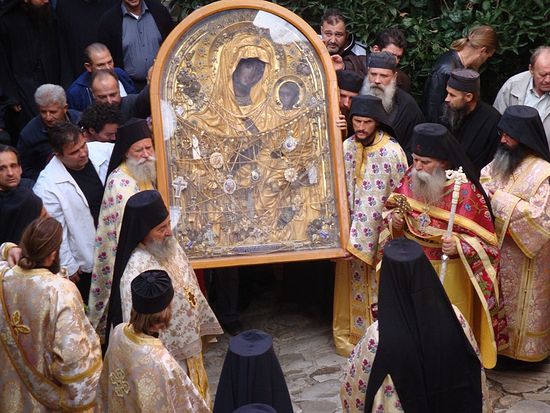 Dochariou Monastery’s miraculous “She Who is Quick to Hear” Icon. Photo: AgionOros.ru

A thirty-seven-year-old mother of two, Catherine, living in the northern part of Greece has reported a miracle attributed to a copy of Dochariou Monastery’s miraculous “She Who is Quick to Hear” Icon. A copy of the icon had been brought to the northwestern Greek village of Arta, where Catherine lives, and she often went to light a candle and pray before the icon, reports the site Ukrainian Orthodox Heritage on Mt. Athos.

For eleven years Catherine had no children, and she entreated the Mother of God “She Who is Quick to Hear” to help her conceive, promising that if the child would be a girl they would name her Maria. Her prayer was heard, but she bore a son, named after his grandfather, George. Nineteen months later a daughter was born, and while Catherine had not forgotten her promise, she called the child Vasiliki, in honor of her mother-in-law.

However, while the first child was delivered easily, Catherine had to have a C-section in a Thessaloniki hospital for her second child. The child was not well and was lying in the intensive care unit. Some of Catherine’s spiritual brothers contacted the Monastery of the Archangel Michael in Thassos and Dochariou on Mt. Athos, and they told her that she must immediately baptize the child herself.

She again turned to the Mother of God “She Who is Quick to Hear” for healing for her child, and baptized her thrice in the name of the Father, and of the Son, and of the Holy Trinity with the name Maria. As Catherine states, from that time everything changed. They returned home to Arta with a healthy baby girl after just one week, and now there are no health problems. Doctors admit that the case is a miracle.

Catherine expressed her deep gratitude to Abbot Gregory of Dochariou, who told her that the most important thing now is to have the child baptized by a priest with the name Maria, which they plan to do soon. Cypriots welcome miraculous Panagia icon for freedom from passions and oppressors
With great joy and excitement, the faithful of the parish of the Apostle and Evangelist Mark in Strovolos, Cyprus, in the Nicosia District, welcomed on February 11 the miraculous and myrrh-streaming Dormition icon of the Panagia Malevi from the Dormition Monastery in the Parnonos Mountain region in Greece. Our Lady in White
Monk Kosmas Simonopetritis
In the dependency of the Holy Monastery of Simonos Petras, in Propouli on the island of Limnos, there’s a very beautiful and rare icon of Our Lady of the Harvest (1707). It’s the patronal icon and its main feature is that the Mother of God is dressed in white, rather than the customary purple. It has also worked a number of miracles and is venerated by all the people of Limnos.
Comments

Castrese Tipaldi9/19/2017 7:26 pm
Wasn't the child already baptized by the mother? And don't we confess one baptism?
This thing is rather odd....

Jesse Dominick3/2/2017 12:25 pm
You can order the icon here: http://www.uncutmountainsupply.com/icons/of-the-theotokos/theotokos-quick-to-hear-dochieriou-12g63/

There is another miraculous copy of the icon in the church at St. Tikhon's Monastery in Waymart, PA. You can order a copy of their icon here https://www.stspress.com/shop/icons/she-who-is-quick-to-hear/

Diane Marie Policandriotes Goldsmith2/28/2017 5:26 am
Faith in our Saints, Blessed Virgin Mary, Jesus and our Heavenly Father has to be real, true, not only in mind and body, but with all our hearts.

I hope our faith is never tested, but as you can see that the Devil is walking the Earth and doing a great job of destruction.

We need to turn to our Heavenly Father and beg for his forgiveness and most of all his Love and Protection. Our Icons represent our faith and must pray. They do listen and take our prayers to God.

Where can you get these two icon's from?