First and second finding of the Honorable Head of the Holy Glorious Prophet, Forerunner, and Baptist of the Lord, John 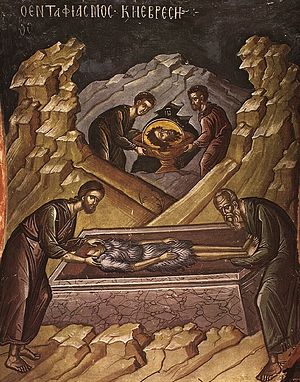 After the Beheading of the Holy Prophet, Forerunner and Baptist John (August 29), his body was buried by disciples in the Samarian city of Sebaste, and his venerable head was hidden by Herodias in an unclean place. Saint Joanna (June 27), the wife of King Herod’s steward Chuza (Luke 8:3), secretly took the holy head and placed it into a vessel and buried it on the Mount of Olives in one of Herod’s properties.

After many years, this property passed into the possession of a government official who became a monk with the name of Innocent. He built a church and a cell there. When they started to dig the foundation, the vessel with the venerable head of John the Baptist was uncovered. Innocent recognized its great holiness from the signs of grace emanating from it. Thus occurred the First Finding of the Head. Innocent preserved it with great piety, but fearful that the holy relic might be abused by unbelievers, before his own death he again hid it in that same place, where it was found. Upon his death the church fell into ruin and was destroyed.

During the days of Saint Constantine the Great (May 21), when Christianity began to flourish, the holy Forerunner appeared twice to two monks journeying to Jerusalem on pilgrimage to the holy places, and he revealed the location of his venerable head.

The monks uncovered the holy relic and, placing it into a sack of camel-hair, they proceeded homewards. Along the way they encountered an unnamed potter and gave him the precious burden to carry. Not knowing what he was carrying, the potter continued on his way. But the holy Forerunner appeared to him and ordered him to flee from the careless and lazy monks, with what he held in his hands. The potter concealed himself from the monks and at home he preserved the venerable head with reverence. Before his death he placed it in a water jug and gave it to his sister.

From that time the venerable head was successively preserved by devout Christians, until the priest Eustathius (infected with the Arian heresy) came into possession of it. He beguiled a multitude of the infirm who had been healed by the holy head, ascribing their cures to the fact that it was in the possession of an Arian. When his blasphemy was uncovered, he was compelled to flee. After he buried the holy relic in a cave, near Emesa, the heretic intended to return later and use it for disseminating falsehood. God, however, did not permit this. Pious monks settled in the cave, and then a monastery arose at this place. In the year 452 Saint John the Baptist appeared to Archimandrite Marcellus of this monastery, and indicated where his head was hidden. This became celebrated as the Second Finding. The holy relic was transferred to Emesa, and later to Constantinople.

The head of the Forerunner rose from the earth as a star, / Brilliant with rays of healing and immortality. / It gathers the choirs of angels in heaven, / And assembles the human race on earth / To sing with one voice the glory of Christ our God.

O Prophet of God and Forerunner of Grace, / Your head has blossomed from the earth as a sacred rose. / We are ever being healed, / For as of old, You preach repentance to the world. Holy Fathers in Praise of St. John the Baptist

The Untold Story of the Head of St. John the Baptist
Priest Maxim Massalitin
Unfortunately, few of the faithful have recourse to the help of such a lamp of grace as the precious head of St. John the Baptist, “the first among martyrs in grace”.[2] Many Orthodox Christians come to France, but not all of them know how many holy relics there are still on French soil despite the outrages committed against them during the French Revolution and subsequent forgetfulness of France’s Christian past.
Comments
×