Holy Fathers in Praise of St. John the Baptist 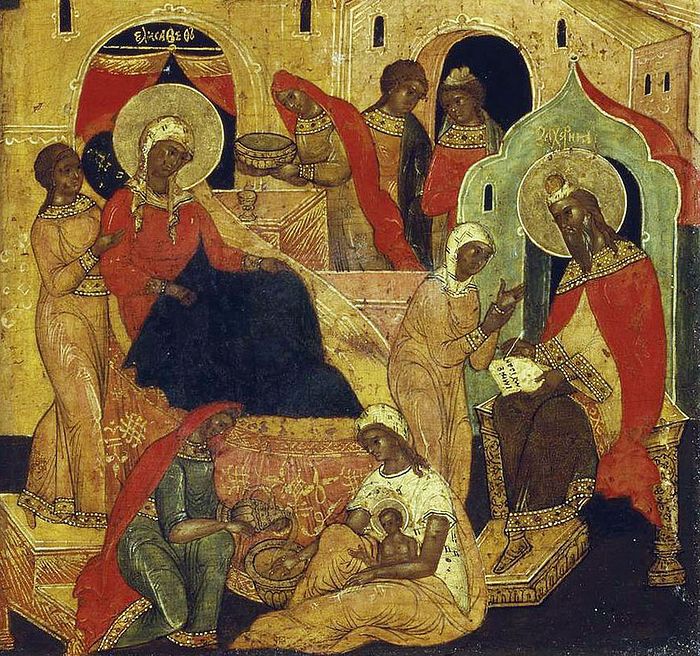 The Nativity of St. John the Baptist

Today we are celebrating the Nativity of St. John, dearest brethren, something which we read has never been granted to any of the other saints. Only the Nativity of our Lord and that of Blessed John [the Baptist] are celebrated and honored throughout the world. A sterile woman bore the latter, a virgin conceived the former; in Elizabeth sterility was overcome, in blessed Mary the method of conception was changed. Elizabeth bore her son by knowing a husband; Mary believed the angel and conceived hers. Elizabeth conceived a man, and so did Mary; but Elizabeth conceived only a man, while Mary conceived both God and man.

What did John want for himself? Why was he interposed? Concerning Whom was he sent ahead? For this reason John was great, and to his greatness even the Savior bears testimony when He says, There has not appeared on earth a man born of woman greater than John the Baptist (Mt 11:11). He surpassed and excelled everyone; he excelled the prophets, he surpassed the patriarchs. Anyone who is born of a woman is inferior to John. Perhaps someone may say: If John is greater than all the sons of women, he is greater than the Savior. Far be it from that. John indeed was born of a woman, but Christ was born of a virgin. The former was brought forth from within a corruptible womb, while the latter was born through the flowering of an undefiled womb. Yet the birth of our Lord is considered along with that of John, so that our Lord may not seem to be outside of the reality of human nature. If John is compared with men, that man surpasses all men; none but the God-man excels him.

John was sent ahead, before God. So great was the excellence in him, so great his grace, that he was considered as the Christ. What, then, did he say concerning Christ? Of his fullness we have all had a share (Jn 1:16). What does this mean, “we all”? The prophets, the patriarchs, the apostles, as many holy people as were sent ahead before the Incarnation or were sent after it, we all have shared in His fullness. We are the vessels, He is the fountain.1 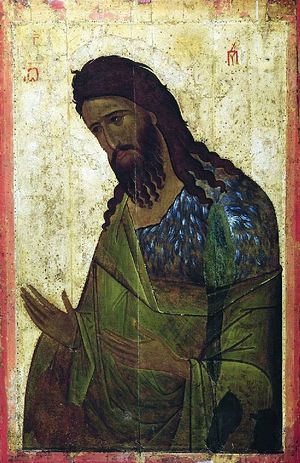 Wherefore He saith, “What went ye out into the wilderness to see?” as though He had said, “Wherefore did ye leave your cities, and your houses, and come together all of you into the wilderness? To see a pitiful and flexible kind of person?” Nay, this were out of all reason, this is not what is indicated by that earnestness, and the concourse of all men unto the wilderness. So much people and so many cities would not have poured themselves out with so great zeal towards the wilderness and the river Jordan at that time, had ye not expected to see some great and marvelous one, one firmer than any rock. Yea, it was not “a reed” surely, that “ye went out to see shaken by the wind:” for the flexible and such as are lightly brought round, and now say one thing, now another, and stand firm in nothing, are most like that.

And see how He omits all wickedness, and mentions this, which then especially haunted them; and removes the suspicion of lightness.

“But what went ye out for to see? a man clothed in soft raiment? Behold, they that wear soft clothing are in kings’ houses.”

Now His meaning is like this: He was not of himself a waverer; and this ye yourselves showed by your earnestness. Much less could any one say this, that he was indeed firm, but having made himself a slave to luxury, he afterwards became languid. For among men, some are such as they are of themselves, others become so; for instance, one man is passionate by nature, and another from having fallen into a long illness gets this infirmity. Again, some men are flexible and fickle by nature, while others become so by being slaves to luxury, and by living effeminately. “But John,” saith He, “neither was such a character by nature, for neither was it a reed that ye went out to see; nor by giving himself to luxury did he lose the advantage he possessed.” For that he did not make himself a slave to luxury, his garb shows, and the wilderness, and the prison. Since, had he been minded to wear soft raiment, he would not have lived in the wilderness, nor in the prison, but in the king’s courts: it being in his power, merely by keeping silence, to have enjoyed honor without limit. For since Herod so reverenced him, even when he had rebuked him, and was in chains, much more would he have courted him, had he held his peace. You see, he had indeed given proof of his firmness and fortitude; and how could he justly incur suspicions of that kind?

When therefore as well by the place, as by his garments, and by their concourse unto Him, He had delineated his character, He proceeds to bring in the prophet. For having said, “Why went ye out? To see a prophet? Yea I say unto you, and more than a prophet;” He goes on, “For this is he of whom it is written, Behold, I send my messenger before Thy face, which shall prepare Thy way before Thee.” Having before set down the testimony of the Jews, He then applies that of the prophets; or rather, He puts in the first place the sentence of the Jews, which must have been a very strong demonstration, the witness being borne by his enemies; secondly, the man’s life; thirdly, His own judgment; fourthly, the prophet; by all means stopping their mouths.

Then lest they should say, “But what if at that time indeed he were such an one, but now is changed?” He added also what follows; his garments, his prison, and together with these the prophecy.

Then having said, that he is greater than a prophet, He signifies also in what he is greater. And in what is he greater? In being near Him that was come. For, “I send,” saith He, “my messenger before Thy face;” that is, nigh Thee. For as with kings, they who ride near the chariot, these are more illustrious than the rest, just so John also appears in his course near the advent itself. See how He signified John’s excellency by this also; and not even here doth He stop, but adds afterwards His own suffrage as well, saying, “Verily I say unto you, among them that are born of women, there hath not arisen a greater than John the Baptist.”

Now what He said is like this: “Woman hath not borne a greater than this man.” And His very sentence is indeed sufficient; but if thou art minded to learn from facts also, consider his table, his manner of life, the height of his soul. For he so lived as though he were in heaven: and having got above the necessities of nature, he travelled as it were a new way, spending all his time in hymns and prayers, and holding intercourse with none among men, but with God alone continually. For he did not so much as see any of his fellow-servants, neither was he seen by any one of them; he fed not on milk, he enjoyed not the comfort of bed, or roof, or market, or any other of the things of men; and yet he was at once mild and earnest. Hear, for example, how considerately he reasons with his own disciples, courageously with the people of the Jews, how openly with the king. For this cause He said also, “There hath not risen among them that are born of women a greater than John the Baptist.”

“For whom the people, it says, were in expectation, and all reasoned in their hearts of John, whether he were not the Christ, he answered them in the words which we have just read.”

They had beheld with admiration the incomparable beauty of John’s mode of life: the splendor of his conduct; the unparalleled and surpassing excellence of his piety. For so great and admirable was he, that even the Jewish populace began to conjecture whether he were not himself the Christ, Whom the law had described to them in shadows, and the holy prophets had before proclaimed. Inasmuch therefore as some ventured on this conjecture, he at once cuts away their surmise, declining as a servant the honors due to the Master, and transferring the glory to Him Who transcends all, even to Christ. For he knew that He is faithful unto those that serve Him. And what he acknowledges is in very deed the truth: for between God and man the distance is immeasurable. “Ye yourselves, there, he says, bear me witness that I said I am not the Christ, but that I am sent before Him.” But where shall we find the holy Baptist thus speaking? In the Gospel of John, who has thus spoken concerning him; “And this is the testimony of John when the scribes and Pharisees at Jerusalem sent to ask him whether he were the Christ. And he confessed, and denied not, and said, that I am not the Christ, but am he that is sent before Him. Great therefore and admirable in very deed is the forerunner, who was the dawning before the Savior’s meridian splendor, the precursor of the spiritual daylight, beautiful as the morning star, and called of God the Father a torch.2 The Nativity of Saint John the Baptist
St. John of Shanghai
Being born exactly half a year before Christ, John the Forerunner by the exact time of his birth depicted his mission of preparing the way for the Lord. He was born at the time of the year (June 24) when the day begins to grow shorter after the summer solstice, whereas the Nativity of Christ occurs (December 25) when the day begins to grow longer after the winter solstice. These facts are an embodiment of the words spoken later, by the Forerunner, after the beginning of Christ's preaching: He must increase, but I must decrease (John 3:30).
Comments