Monastic Tonsure: Second Baptism, or the Marriage of the Soul to Christ

Metropolitan Jeremiah of Gortynos and Megalopolis

Speaking of the holy sacraments, I want to say something about the sacrament of tonsure. Is monastic tonsure a sacrament? Of course it’s a sacrament! As the Church celebrates the sacrament of Marriage for a young man and woman who want to create a family, so for a young man or woman who wants to dedicate his or herself to God and live in chastity, the Church celebrates another sacrament—monastic tonsure! And how beautiful is the rite of this sacrament! If you find out that a monk or nun is to be tonsured in a monastery, go there to delight not only in what you see, but also what you hear!

In essence, the monastic tonsure is a second Baptism. We have all been baptized and have given an oath that we will belong to God. We have said, “I do renounce Satan” and “I do unite myself to Christ,” and we have dedicated ourselves to God through the cutting of our hair, but we have forgotten all of this. In fact, by our Baptism, we have bound ourselves to the obligation of belonging to God. With the words “I do renounce,” which we then pronounced (if we were baptized as infants, then through the mouth of our godparent), we drove satan out of our lives, and we even spat upon him three times, losing all connection with him. With the words, “I do unite” we signed, in the presence of angels and men, a sacred contract that now we fully belong to God. With If anyone desires to come after me (Lk. 9:23) the Lord called to the unbaptized. It behooves us, the baptized, to pronounce: Speak Lord, for Thy servant heareth (1 Kg. [1 Sam.] 3:10). It is a big deal, my brothers, that we were baptized and became Christians. How terrible that we forget our baptismal vows, and from this we now lose the grace of holy Baptism. 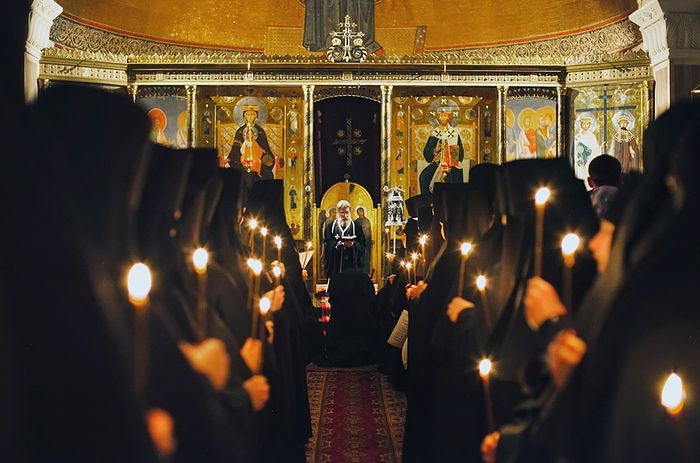 But elect souls come—men and women, young and old, who desire to renew the vows of their holy Baptism, to now consciously say that they reject all the works of satan and fully belong to God, and repeat the cutting of their hair, as was done at Baptism. The tonsuring of the hair firstly symbolizes our offering to God from the very top of our body, and secondly, it means the forsaking of our wicked thoughts and the consecration of our mind to God.

Thus, the monastic tonsure is, above all, a repeating of our baptismal vows… but not only that. We can also speak of the monastic tonsure as a marriage. The soul of a monk or nun enters into marriage with Christ, and the angels are present at this moment and bear witness to the sacredness and indissolubility of this union. 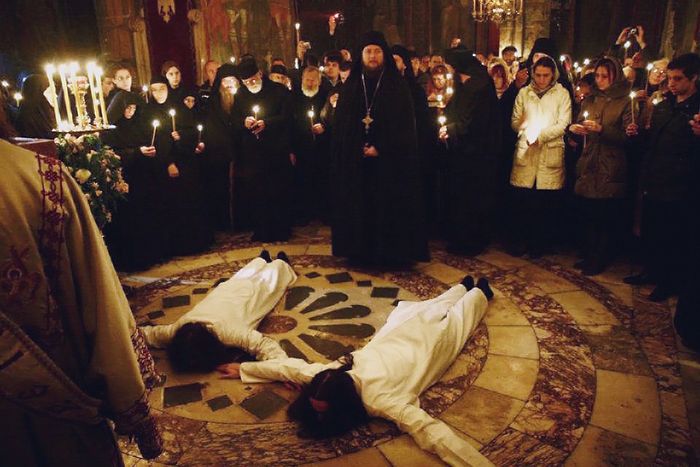 During the wedding of a man and woman, the priest reads a prayer which addresses God and calls Him “priest of mystical and undefiled marriage, and the ordainer of the law of the marriage of the body.” We know what this marriage “of the body” which the Lord “ordained” is. It’s the marriage of our parents from which we were born. But what is this other marriage, “mystical and undefiled,” which God serves, as in the above-mentioned prayer? It is the marriage of monks and God, the monastic tonsure. It is the very beautiful and sweet marriage of the soul with Christ. A nun knows that the Heavenly Bridegroom Christ will never hit or divorce her. Christ was beaten and crucified for His bride, and He prepares for her a mansion in Heaven—His Heavenly Kingdom! The love of God is poured out abundantly at a monastic tonsuring. “Thou hast sweetened me with Thy love, O Christ, and by Thy Divine zeal hast Thou changed me.”[1]

I also want to say that this “mystical and undefiled” marriage is not the natural condition of man. Natural for man after the Fall is marriage. Virginity is not the natural condition, but supernatural.[2] I ask you: how can a monk or nun, having a body, overcome the natural and live supernaturally? It’s very simple! They attain to the supernatural because they have constant communion with God, Who is above all nature. St. John Climacus says: “When nature is defeated, it should be recognized that this is due to the presence of Him Who is above nature.”[3] 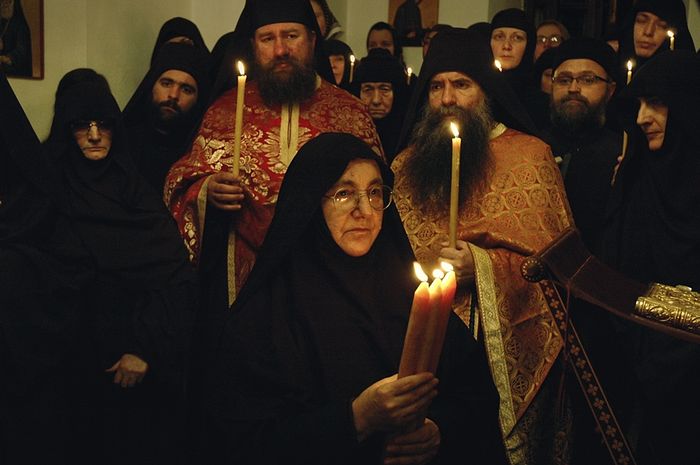 Monks and nuns have their world. They always live “lifting up their hearts”![4] An example of their being cut off from the worldly is the band above their eyes. By this band I mean the apostolnik which nuns wear, and the klobuk, which monks and hieromonks wear.[5] Therefore, my dear Christians, be very attentive when you meet monks or nuns. Be careful what you say. Your conversation with them should be not of the worldly, but of the Divine, because when you speak with them of worldly things, you extract them from their world, from “their water,” as we say. You harm them, and, in a way, you will harm yourself. For if a monk breaks his communion with Christ, which should be unceasing, and blabbers about worldly things, then when you ask him to pray for your family problems, his prayer will not have strength and will not be heard. When you go to a monastery, converse with the monks and nuns as if you yourself were a monk or nun. Such a monastery visit will bring you grace from God and the Theotokos. 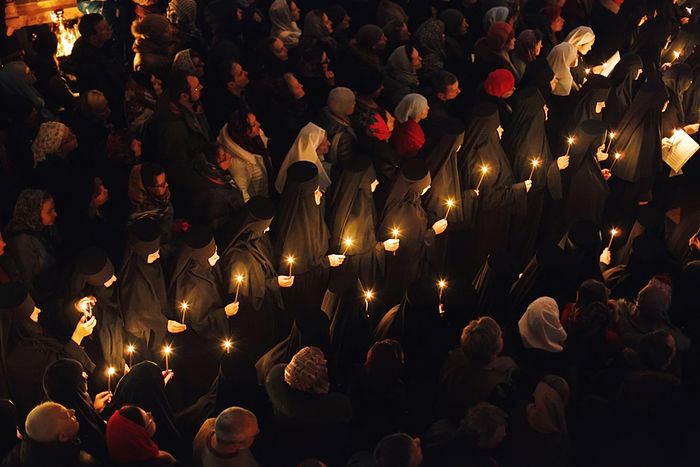 In conclusion, I want to tell you the main thing: if your child, a boy or girl, says to you, “Mama, papa, I want to devote myself to God and leave for a monastery,” do not hinder him and don’t go against this desire that was placed in him by God. You commit the greatest sin if you prevent him—an even greater sin than if you destroyed a church. And I’ll tell you why. If you destroy a church, we will gather money and build it anew. But if you thwart your child in his sacred calling, this evil cannot be mended. It is a great honor and great blessing for a family to give its child to God to become a monk or nun.

Metropolitan Jeremiah of Gortynos and Megalopolis
Translated by Jesse Dominick

[1] This prayer comes from the Order of Preparation for Communion.

[2] Strictly theologically speaking, virginity is indeed man’s natural condition, as the condition of Adam and Eve before the Fall is considered man’s natural condition, with his fallen nature being below or against nature, and with the possibility of rising above nature in Christ. The Fathers unanimously teach that virginity reigned in Eden before sin. Note that Met. Jeremiah is speaking of what is “natural” for man in his sub-natural state.

[4] This is referencing the priest’s exclamation in the Anaphora, “Let us lift up our hearts,” to which the people reply, “We lift them unto the Lord.”

[5] Met. Jeremiah is a Greek bishop. In the Russian tradition nuns sometimes also wear a klobuk. Tonsure performed at the Lugansk convent during artillery shelling
By the mercy of God, after the tonsure ceremony was over, the cannonade calmed down and did not disturb the silence in the city for the rest of the day and for the following night.

The Christian Life is Monastic Life
Nathan Duffy
To a culture whose core values are self-fulfillment, self-satisfaction, and self-sovereignty, Orthodox monastic life appears as an affront and a scandal. What could be more contrary to our individualistic society which prizes comfort, ease, and “freedom” above all other concerns than a life of utter self-abasement, strict obedience, and striving after Holy suffering for Christ’s sake?
Comments

Editor4/30/2022 12:08 pm
Parascevi: This is not an ordination, but the taking of monastic vows: Stability, chastity, and obedience. Holding a lit candle signifies the soul, alight with love of God. The hair is not shaved. The priest or bishop performing the tonsure simply clips four small portions in the form of the cross on the head, just as it's done during a baptism. A tonsure ceremony traditionally takes place after the evening service.

Paraskevi4/29/2022 10:05 pm
Why do Orthodox nuns ordained in the evening service? Why do they light the candles? Why their hair is shaved off?
×