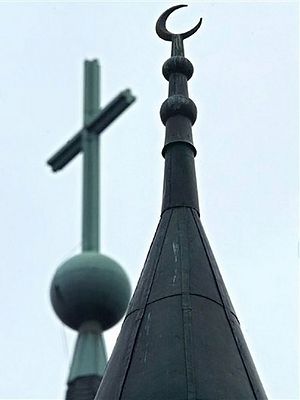 Photo: breezecreatives.com
Abbot Gregory (Zumis) of Dochariou Monastery on Mt. Athos has offered serious criticism of Greece’s immigration policy, noting that their Orthodox ancestors struggled for six hundred years against the Islamization of Greece, but now the time is approaching when there will be more Muslims than Orthodox Christians in the nation. AgionOros.ru offers the main points of his statement.

According to Archimandrite Gregory, the refugees arriving to Greece “are equipped with the most sophisticated cell phones, with skinny jeans, a scarf and cigarettes. Unfortunately, in Mohammed’s time women didn’t wear makeup, so he didn’t speak against such physical appearance…”

The Athonite elder added that it’s not chauvinistic to value your own homeland and culture, wanting to preserve it. “I’m not going to their homeland to fight with them, but I don’t want to see them in my homeland. It’s not chauvinism.” “The government banned the ringing of bells under the pretext that it’s too loud,” he continued, “but when the muezzin yells out three times a day, it doesn’t bother anyone?”

In offering his critique, Fr. Gregory plainly spoke the truth about Islam: “The Islamists hate our faith, and they hate the Cross, Christ, and the Theotokos.” Unfortunately, he says, even bishops remove their crosses when going to visit the refugees so as not to “annoy them.”

Why does the government invite in refugees, he wondered, if they are unwilling to look after Greece’s own homeless and poor?

“The Orthodox Church has encountered two great enemies on its historical path: Islamism and Papism. And today they, taking each other by the hand, have joined forces to destroy Greece… They burned and slaughtered our ancestors, but we think things will turn out better? Why are we receiving them into our country?” the spiritual father asked.

In his words, the refugees are, in fact, conquerors.

“Greece has become the court of the devil—any atheist and antichrist can find shelter in a country of martyrs and saints. There exists hatred and the desire to erase Orthodoxy and Greece from the face of the earth. Who will give an answer for this evil? Our atheistic rulers or the pope of Rome, who have become an object of veneration for some Orthodox? Unfortunately, everything is moving towards us communing of unleavened bread,” Fr. Gregory said, pointing to ancient divergence in Eucharistic practices between the Orthodox Church and the Roman Catholic communion. “[A]nd the Koran will be held in our hands,” he said in conclusion.

Updated to correct Archimandrite Gregory's monastery from Hilandar to Dochariou. Metropolitan Amvrosios of Kalavryta: Soon the only thing left for us to do will be to sing "Memory Eternal" to Greece!
The end of Greek Christian culture will mean the end of Greece as a state as well. This process is developing very rapidly and soon there will be for us only to sing ‘Memory Eternal!’ to Greece. Salik Alvi12/27/2020 12:12 am
My friends who process to be Christian's I have read the history of the ottom6 turks however I have also read the history of the Christian's the facts are that the Turks back during the ottoman times were not interested in converting people to Islam they were more interested in expanding there territories this can be seen as true because the Turks allowed the orthodox christians to practice there religion and they did not destroy the monasteries however let's compare that to the Christian's who came to north and south america they came with the sword they forced there religion on the natives this is a historical fact also look at the philippines again the Christian came with the sword and forced the natives to convert but the fact is the Ottoman turks preserved your christian orthodox religion if they had wanted they could have destroyed all the Christian monasteries and forced the people to convert but they did not. Christianity on the hand has forced people to convert. Also after the ottoman turks left greece many of the ancient mosques were destroyed etc I am not against the orthodox also I am not against the Turks I speak with as a open minded person who has studied history

Darius6/17/2018 8:58 am
This brings tears to my eyes. I am 26 years old in the US of Greek, Romanian and Serbian decent. I watch in horror as he barabrians besiege Greece yet again. The Saracens are back and they’re worst then their Turkish brothers who murdered millions of us. The LIBERAL LEFTIST GLOBAL agenda is to enave all Christians and Europeans, especially for the Orthodox whom they hate with malevolent passion. People of Greece- rise up and destroy the Muslim barabarian hordes. Overthrow your satanic and corrupt godless government and bring back the holy cross to reign over Hellas forever.

Anna Burkman3/21/2017 1:45 am
The Muslims are going to take over Greece without one fire shot. They will conquer Greece through reproduction; the Greek youth are not getting married and reproducing.
They have lost their road to Orthodoxy, we Greeks in America have a stronger faith than those in Greece. When I was visiting Greece, I was shocked when I realized, I was the youngest person in church and at that time I was 50 years old.
The Greek people need to embrace the Orthodox religion and pray that God shows them the way. The Abbot is 100% correct!!!

M Rogers3/12/2017 9:28 am
The suggestion that this is xenophobic and racist is pathetic! It is proof that the bleeding heart liberals are responsible for the ridiculous and precarious situation we find ourselves in! These are not refugees, if they are why are the majority young fit men? What happened to all the women and children? If they are genuine do we want cowards not willing to defend their own countries coming to pilfer in ours?!!

I am half English/half Greek Cypriot and I take great offence to the comment we deserve to be destroyed in Britain. Post imperial guilt will. It longer help the cultural marxists realise their sick agenda. Europe is finally waking up, Brexit and soon Le Pen and Wilders. I thank God we will soon be saved.

Helen Pandelides3/12/2017 2:32 am
Has anybody wondered why they don't go to Arab countries instead of coming to Europe? Egypt was a Christian country and Muslims from Sudan moved to Egypt. Now in Egypt there are 95% Muslims and 5% Christians and the country is "Muslim".

TML3/11/2017 10:24 pm
Islamic goals are to invade, conquer and overtake Christianity.
Greece must prevent this movement to protect our religion and tradition of our ancestors.

George3/11/2017 7:18 am
"The Orthodox Church has encountered two great enemies on its historical path: Islamism and Papism."
The good Abbot is forgetting the greatest evil of all - Communism, and if we love the truth, and are honest, we will realize that a strong Jewish influence was behind Communism. There are plain facts that show Jews are behind mass immigration into Europe, and have been supporting policies of conflict in the Middle East. The truth of the Jewish problem is so plain, but to speak this truth in public will get your career ruined and even locked up in many European countries for hate crime.

Gavin James Campbell3/11/2017 2:15 am
This abbot is spreading racism, bigotry, and xenophobia.

Greece is not getting invaded. The refugees are fleeing a brutal civil war. The Christian response is welcome them and show them compassion. That Jesus Himself said "I was a stranger and you welcomed me". This false abbot will answer to God for spurning these people in a time of need.

Anthony3/10/2017 11:40 pm
Sorry but the refugees belong in Europe - godless western Europe that is. Not Greece. Afterall, western whitey has, for centuries being pillaging and plundering their countries, so it's only right that they should settle in the western white man's country. I for one applaud their efforts in trying to get to places like Deutschland and our former colonial masters - Britain. I would cherish nothing more than to see those two nations being made subjects of the incomers in their own countries as they have done for centuries in other peoples' countries. As for Greece, well the refugees ain't gonna be staying. The country is broke. (Ya see, there is a positive). The refugees are following the smell of the $$$. And too darn right.

J P Moskal3/10/2017 11:23 pm
The most recent move by the Patriarch of Constantinople and the Pope was to suggest communion not to be assimilated into the Western Church. The Pope has said recently that a communion of Orthodox and Rome would not include acceptance of the Pope as head of the Church. There would of course still be a "First Among Equals" presumably accepting her Patriarch of Constantinople in that role. Has anyone ever stopped to think that the conservative influence of the Orthodox Church could change the direction of the Western Church. That would mean it to be a moral duty to pursue communion and dialogue at all levels. My opinion of course ... but this is a different time, the Church will be stronger unified and it inevitably has to be and from a certain perspective it is about the equivalent of two brothers fighting because one was wronged a long time ago yet remain a part of the same family. The other issues may just resolve themselves ... maybe a reversal happens and Constantinople or the Church in Jerusalem becomes the center of Catholicism. Given the condition of the world it would seem prudent for the clerical leaders to continue to work toward that goal instead of pointing the finger at one another and continuing the decisiveness that divides the Church and permits her adversaries to exploit - divide and conquer. Just my opinion ...

The chef3/10/2017 8:39 pm
I wish that I die 1st before this happens. Do something about it and stop the refugees from coming in