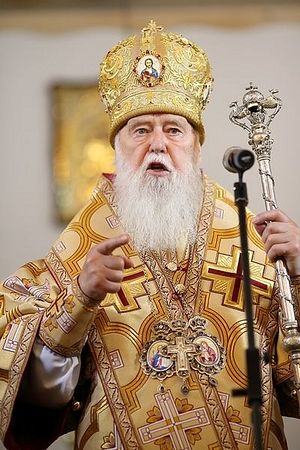 Photo: Pravoslavie.ru
Speaking at the ceremonial meeting of the Verkhovna Rada in honor of the centenary of parliamentarism, the false “Patriarch” Philaret of the schismatic “Kiev Patriarchate” referred to the clergy and faithful of the true, canonical Orthodox Church in Ukraine as “fools,” reports the site Ukrainian Truth.

“The Church is divided. The one is Ukrainian and so is the other. But one is independent—the “Kiev Patriarchate,” and the other is dependent. But they are also Ukrainians! And why do they not unite into one Church? Because the fools do not know who they serve,” said the fake patriarch, at the same time criticizing Metropolitan Onuphry, the primate of the canonical Orthodox Church in Ukraine.

In his words, at a ceremony when President Poroshenko gave out Hero of Ukraine awards, Metropolitan Onuphry did not stand or honor the awardees but said “We cannot respect killers.” “For us they’re heroes, and for him, killers. Can such clergy serve the Ukrainian government? They cannot,” stated Denisenko.

He went on to thank the Ukrainian parliament for its letter of appeal to Ecumenical Patriarch Bartholomew, asking him to grant autocephaly to the Ukrainian Church. “We stand for a united Local Church, which defends the interests of the Ukrainian people, the Ukrainian state, and Ukrainian Orthodoxy,” he declared, reflecting the nationalism that fuels his schismatic community.

“Patriarch” Philaret has many times over called on his small flock to use aggression and terror against believers of the legitimate Orthodox Church in Ukraine. In November 2016 he justified the killing of civilians in Donbass, saying they had to atone for their referendum on independence with the shedding of their blood.

Pseudo-patriarch Philaret says that Donbass should “atone for its sin by blood”
The head of the “Kyiv Patriarchate” organization, unrecognized in the Orthodox world, eighty-seven-year-old Philaret (Denisenko), has declared that Donbass residents must redeem by blood their guilt for the referendum on independence.