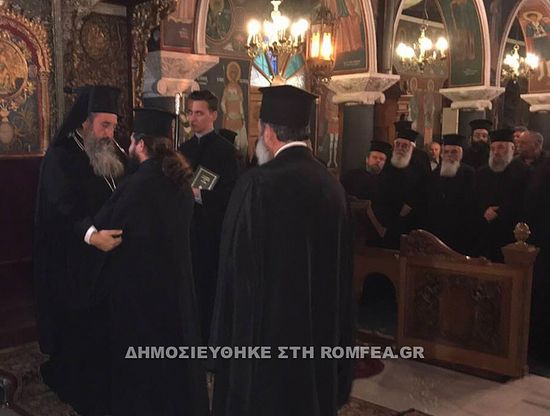 As previously reported, on the Sunday of Orthodoxy four priests from the island of Crete had joined the growing number of clergy and monasteries that have ceased commemoration of their ruling bishops for their acceptance of the documents promulgated at the June 2016 pan-Orthodox council on Crete, especially as concerns the text, “Relations of the Orthodox Church With the Rest of the Christian World.”

Two weeks later, on March 19, the Lenten Sunday of the Cross, the Diocese of Rethymno and Avlopotamos announced that one of those priests, Fr. Emmanuel Sarri, has agreed to begin commemorating Metropolitan Eugenios again, according to Romfea.

Fr. Emmanuel commemorated Metropolitan Eugenios at the morning Liturgy and at that evening’s Vespers at the Virgin Mary Church in Rethymno, in the presence of the bishop, he announced that he was revising his previous stand, and giving up his protest.

At its meeting on March 16, the Holy Provincial Synod of Crete formed a three-member committee to meet and discuss with Protopresbyter Gabriel Mazanaki, Fr. Emmanuel Sarri, Fr. Spyridon Damanaki, and Fr. Paul Mazanaki their cessation of commemoration and “walling off” from their ruling hierarchs. What occurred in the meeting between Fr. Emmanuel and the committee and the reason for his reversal has not yet been stated.