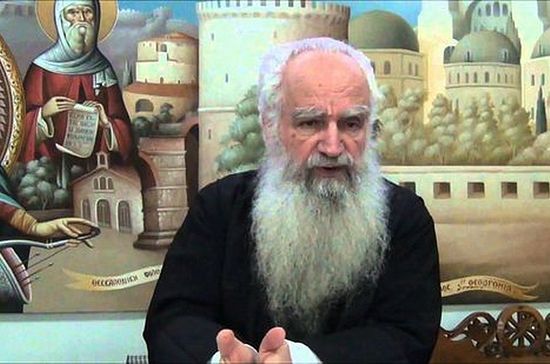 On the Sunday of Orthodoxy, Greek cleric Archpriest Theodore Zisis announced that he was ceasing commemoration of his ruling bishop, Metropolitan Anthimos of Thessaloniki, believing that his support of last year’s Pan-Orthodox Council on Crete, which acknowledged the term “church” for other Christian confessions, constitutes a fall into the heresy of ecumenism, which denies that the Orthodox Church is the one, true Church. The next day the metropolitan suspended Fr. Theodore from his priestly duties, reports AgionOros.ru.

Fr. Theodore explained his decision by appealing to Canon 15 of the First-Second Council held in Constantinople in 861, presided over by St. Photios the Great. This canon states that if a bishop clearly preaches a heresy previously condemned by either a council or the holy fathers, then priests are allowed to cease commemorating him in the Liturgy, and are to face no canonical penalties.

The crux of the issue at hand is whether the Crete Council fell into the heresy of ecumenism in its documents, which Fr. Theodore and other prominent clergymen, including Metropolitan Hierotheos (Vlachos) believe it did, and whether such a heresy has been previously condemned. The same Canon 15 considers it schism if a priest ceases to commemorate a bishop if the heresy in question has not been previously condemned.

Some argue, therefore, that Canon 15 in fact condemns Fr. Theodore, while others note that the holy fathers’ continual fights against heresy have always been precisely for the sake of preserving the one, true Orthodox Church, and point to such documents as the Sixth Ecumenical Council’s Definition of Faith:

These things, therefore, with all diligence and care having been formulated by us, we define that it be permitted to no one to bring forward, or to write, or to compose, or to think, or to teach a different faith. Whosoever shall presume to compose a different faith, or to propose, or teach, or hand to those wishing to be converted to the knowledge of the truth, from the Gentiles or Jews, or from any heresy, any different Creed; or to introduce a new voice or invention of speech to subvert these things which now have been determined by us, all these, if they be Bishops or clerics let them be deposed, the Bishops from the Episcopate, the clerics from the clergy; but if they be monks or laymen: let them be anathematized.

Metropolitan Anthimos had previously instructed Fr. Theodore to cease speaking out against the Crete Council, considering his words as fomenting schism. Following his announcement of ceasing commemoration, the bishop suspended Fr. Theodore from serving or speaking publicly in any of the churches of his metropolis. He has also summoned Fr. Theodore to spiritual court, excommunicated him from the holy chalice, and stripped him of his honorary title as “Archpriest.”

For his part, Fr. Theodore has described these penalties as “unjust, hasty, and anti-canonical,” noting that such sanctions have been placed on him before the proceedings of the ecclesiastical court, and arguing that Canon 15 of the First-Second Council states that priests taking action such as him “shall be deemed worthy to enjoy the honor which befits them among Orthodox Christians.”

Fr. Theodore urged Metropolitan Anthimos to reverse his decision and to allow him the opportunity to serve in his parish of St. Anthony the Great, without commemoration, according to his conscience. VIDEO: On the Rise of Ecumenism in the Theological Schools
Protopresbyter Theodore Zisis

VIDEO: On the Rise of Ecumenism in the Theological Schools
Protopresbyter Theodore Zisis
Fr. Theodoros Zisis is Emeritus Professor of Patrology and former Chair of the Department of Pastoral and Social Theology at Aristotle University of Thessaloniki. In the video below Fr. Theodore, known as a staunch defender of traditional, patristic Orthodoxy, discusses the rise of ecumenism in Greek theological schools, from its healthy beginnings as a means to proclaim the truth of Orthodoxy, to its decline into illegitimate syncretism. World - Dialogues of Truth. Great Anthony and contemporary ecumenism
Protopresbyter Theodore Zissis, Professor of the Theological School of the Aristotelian University of Thessaloniki

World - Dialogues of Truth. Great Anthony and contemporary ecumenism
Protopresbyter Theodore Zisis
It is truly dreadful the vision that Saint Anthony had regarding the presence of the heretics inside Orthodox churches. This vision illustrates and explains graphically the reasons why the Holy Fathers forbid with Synodal canons the entry of the heretics into consecrated places, their participation in services and liturgies, with common prayers and common worshipping.
Comments

JM3/4/2020 3:26 am
Brief comment: As a Protestant anticipating becoming a catechumen, I think that punishment of Fr. Zisis appears unduly harsh. However, it might interest you to know that ecumenism in Protestantism is also viewed with suspicion. Removing suspicion, and confirming the truth of the )Orthodox) trinity has been greatly appreciated, especially the warm welcome of many Orthodox and their encouragement. Personally, I don't think any Protestant church really cares if they're called "communities" or "churches." I do think that many Protestant converts to Orthodoxy would care if they're called "converts," since many would consider themselves true believers prior to joining the Orthodox church. Some Protestants consider "heterodoxy" and trendy label and would self-identify with it. This points to the problem of the church caring what others think of its sensitivity to salvation of non-believers, when it really misses the point. Evangelize with conviction, not back-biting. I left a lengthy reply at Fr. Heers website, and my post was deleted. It appears that positive or negative criticism is unwelcome there: https://orthodoxethos.com/post/defense-and-declaration-of-cessation-of-commemoration-of-bishop-on-account-of-the-teaching-of-heresy

Matrona8/24/2018 5:04 pm
God bless, Fr. Zisis for standing up against heresy in the church. My God grant him strength to continue on and many years.

deacon John moutafis6/29/2017 6:17 pm
Father
I will pray for you I really believe you are doing the
Right thing if I were there it would be a honor to be bye you're side

Dr. Frederick G. Elias6/10/2017 4:15 am
I see a rise of narcissism and despotism within the church. My recommendation is to follow the Teachings of Jesus Christ and the Holy Fathers and cast your egos aside. It's not too late to save your souls.

Caj Eric Ilotuuli4/10/2017 12:11 am
Father Zisis ! You are a great inspiration in the way you serve Christ and the Orthodox faith . Pray for me that I , a layman , can be worthy to suffer for Christ .
Caj Eric Konstantin Ilotuuli , Stockholm , Sweden

Isidora3/30/2017 11:06 am
The preachers of NEW DOCTRINES are the heretics, not the defenders of Orthodoxy. Our times and the struggle against Ecumenism is no different than the struggle against other heresies the Orthodox Church has defeated. It is typical that the deluded promoters of heresy use excommunication as their last resort. But it is an honor to be excommunicated by them. Remember that the idolatrous pope excommunicated all of the Orthodox... it is an honor to be recognized as their enemy.

michael jovanovich3/18/2017 7:42 am
Orthodox are obligated NOT to follow heretical Bishops! Decades ago Orthodox writers warned that the day would come when those who defend the truth would face excommunication. So be it. The faithful HAVE NO CHOICE! God sees all and will judge all of us, clergy and laity, alike. If anything, heretical clergy will be judged more harshly. For many, many years now Orthodoxy has been infiltrated and incremental changes, bad ones, have been unfolding. Anyone who can't see and FEEL this is either in denial or has been sleeping for years. Clearly, the Patriarch of Constantinople is a heretic and many have ceased to follow him and rightly so! There will be many bad days ahead but "those who endureth to the end will be saved."

Gavin James Campbell3/17/2017 5:29 pm
When you are a priest, you are subject to the limitations that go with the calling. You commemorate your bishop. And if you will not, then you cannot be a priest.

Anthony3/16/2017 9:44 pm
Remember folks. St Nektarios of Pentapolis was also defrocked on spurious grounds. He died without ever having his name cleared by the Patriachate of Alexandria, and it took Papa Petros of Alexandria in the 1980's to clear his name and seek pardon from the saint AFTER he Pater Nektarios had already been canonised by the then Patriarch of Constantinople Athenagoras I think in the 1960's.

The point is Pater Theodoros is 100% correct in his defence of Orthodoxy, and his name will be exonerated one way or another. This dastardly deed by the wolf Anthimos is groundless. I simply hope that he realises he and his Phanar are the one's who better repent of their heresy. We should all pray with our hearts for Pater Theodoros. He needs our prayers at this time very much.