Sunday of St. Mary of Egypt 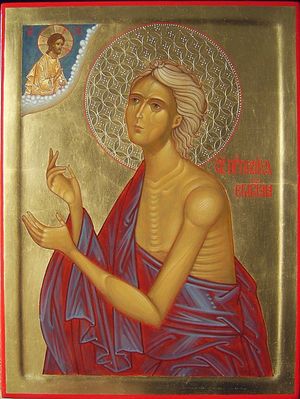 Her life tells us about how, from her early youth, she carried on an extremely debauched life and then, more like a tourist than a pilgrim, decided to go to Jerusalem for the feast of the Exaltation of the Honorable Cross of the Lord. But a mysterious power would not let her into the church until she became conscious of her sins and called out to the Mother of God and to the Lord for mercy. Then she was able to enter the church, and shaken to the core, resolved to spend the rest of her life in prayer and repentance. Many years later, the saintly monk Zosimas met her in the desert; it is from him that we know her story.

It is the story of finding hope. Mary had a reality, which, for the time being, suited her. As the poet said, “wine and men were her atmosphere.” But she had no future; she only had what one prefers not to think about. Soon her charms would wilt—especially soon due to her unhealthy lifestyle—and men would lose all interest in her, turning their attention to new victims with social temperaments, and she would become lonely, cast off, and lacking means for sustenance. But in turning to God she found hope—hope not only that her earthly life would be filled with dignity and meaning, but most importantly that before her is eternal life.

Covered by the cloak, the ascetic turned to Zosimas: “Why do you want to speak with me, a sinful woman? What did you wish to learn from me, you who have not shrunk from such great labors?”

Sermon for the Sunday of St. Mary of Egypt

Sermon for the Sunday of St. Mary of Egypt

What repentance does is twofold; it is the means by which we are granted knowledge about ourselves, about the reality around us and about the highest of the spiritual realities and it breaks and refines the soul raising up the fallen man.

On the Sunday of St. Mary of Egypt

On the Sunday of St. Mary of Egypt

The Life of St Mary teaches us many things. Perhaps the first and most obvious lesson we can learn from her is that we should never judge, never pre-judge. Who will be saved? It is impossible to answer this question, for it is never too late to repent, even for us. Humanly speaking, when we consider the life of Mary until her twenty-ninth year, we might think that salvation had become impossible for her. And yet the service to her calls her 'the greatest of saints'.

Humble Repentance or Paralyzing Guilt?: Homily on St. Mary of Egypt for the 5th Sunday of Lent in the Orthodox Church

Humble Repentance or Paralyzing Guilt?: Homily on St. Mary of Egypt for the 5th Sunday of Lent in the Orthodox Church

Whenever we experience guilt and shame because of something we have done wrong, we need to ask ourselves a question. Do we feel that way because we are sorrowful that we have disobeyed God or because we cannot stand being less than perfect in our own eyes or those of others?

The “Standing of St. Mary of Egypt”

The “Standing of St. Mary of Egypt”

I am sincerely convinced that at the remarkable service of the Great Canon and “Standing of St. Mary” we can feel, comprehend, and understand the essence of Christian ascetic labor, co-standing with St. Mary in her fiery, bold striving toward the Savior, Who seeks out the soul of a sinner.

And she was so profoundly shaken by this experience that she left all that had been her life, retired into the desert, and with a life which the service books define as ‘extreme’, fought to conquer her flesh, her soul, her memories - everything that was sin, but also everything that could lead her away from God. And we know how glorious her life was, the kind of person she became.

Thursday of the Great Canon, with the Life of St. Mary of Egypt

Thursday of the Great Canon, with the Life of St. Mary of Egypt

On Wednesday evening a very special service is celebrated in Orthodox churches—the Great Canon with the Life of St. Mary of Egypt. This is the only time in the year when the Great Canon of St. Andrew of Crete, which was read in four parts during the first week of Great Lent, is read in its entirety, along with the canon to St. Mary of Egypt. This canon contains every motivation toward fasting and repentance, and the Church repeats it in the fifth week in its entirety in order to inspire us with renewed strength to finish the course of the fast. The Life of St. Mary of Egypt is also read to that end—to motivate us to be attentive and repent.

Remember Sins and Despair Not: A Homily on the Sunday of St. Mary of Egypt

Remember Sins and Despair Not: A Homily on the Sunday of St. Mary of Egypt

Because of her sincere faith in Christ and her ardent desire to repent, her sins did not weigh her down. For her, the memory of her falls was not a victory for Satan, but it took part in the ultimate victory in Christ. I encourage you to take heart from her example. Our sins may have long-term consequences but even this can be reoriented to Christ.

The life of St. Mary teaches us that there is no sin that could overcome the mercy of God, there is no abyss of dissoluteness that we could not rise from by the grace of God and by taking the path of faith and repentance.

Most of us know the story of St. Mary of Egypt but perhaps we can dig a little deeper into the Church’s true purpose for remembering her now at the end of the great fast.

Christians know the mystery of Christ by the power of true faith and not by logical proofs. For this reason, the living Church, which is faithful in keeping the commandments of its Christ, plants in the hearts of its children the ardent love of Christ through love of the true Orthodox faith.

St. Mary of Egypt received from the Lord the gift of fiery, unquenchable love, and instead of giving her heart to her Creator and His creation, she directed all the force of divine eros on herself. But any talent directed exclusively towards our “Me” not only impoverishes a person—it deprives him of his sanity.