Non-commemorating Athonite monks told they must leave their cells 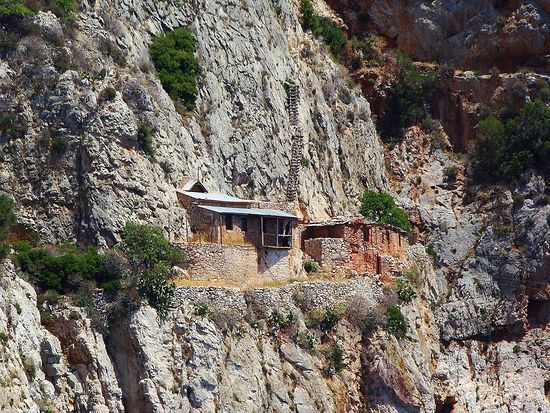 The situation has intensified on Mt. Athos after more than fifty cells ceased commemoration during the Divine services of His All-Holiness Patriarch Bartholomew, the ruling bishop of the Holy Mountain, reports AgionOros.

The more than one hundred monastics inhabiting these cells have taken this step in response to the documents of last year’s council on Crete, and the general path of the heresy of Ecumenism, which has concerned them for many years, thus “walling themselves off” but without committing the grave sin of schism, as has Esphigmenou Monastery.

This distinction between walling off and schism is explained, in a text from the Orthodox Outlet for Dogmatic Enquiries, also available at Mystagogy from 2013, regarding Esphigmenou Monastery:

Other predominant Monasteries have also interrupted the commemoration of the Patriarch at times and are cautious about the future, however, none of them has ever interrupted ecclesiastical communion nor has any ever acceded to an ecclesiastical communion with outside ecclesiastical groups—and of course none of them has ever been persecuted. On the Holy Mountain there are other zealot monks, who however live peacefully in their cells, without disturbing the Canonicity and the Statutes of the Holy Mountain.

Although non-commemorators have been left in peace in the past, these roughly one hundred monks have received notification that they must leave their cells. However, many of the monks have declined to voluntarily leave their habitations.

In July of last year, an open letter was composed by over sixty Athonite hieromonks and monks, led by the disciple of St. Paisios the Athonite, Elder Gabriel of Karyes, and sent to the governing Sacred Community of Mt. Athos, listing twelve points of divergence between the Crete Council and Orthodox Tradition, and calling for the council to be condemned. Without such a condemnation, they would be forced to cease commemoration of the patriarch in the services, wrote the monks, including inhabitants of the Great Lavra, Vatopedi, Hilandar, Pantocrator, Koutloumousiou, Stavronikita, and Philotheou Monasteries, and monks and elders of Karoulia, Kapsala, and various sketes.

For its part, in November of last year, Mt. Athos’ Sacred Community composed a document in response to the conciliar documents of Crete, concluding that, “The documents of the Crete Council must overcome their one-sidedness which is due to the neglect of the theological tradition, traced by the modern God-bearing elders and authoritative theologians, who have looked upon the path of ecumenical dialogue as an ecumenistic deviation from truth. Not only the so-called ‘zealots’ but also sound voices seek the words of truth, to find and ensure rest.”

At that time, the Sacred Community wrote that cessation of Church hierarchy is “unjustified for now.” The “Council” of Crete and the New Emerging Ecclesiology: An Orthodox Examination
Fr. Peter Alban Heers

The “Council” of Crete and the New Emerging Ecclesiology: An Orthodox Examination
Fr. Peter Alban Heers
In this new lecture, Fr. Peter offers an insightul and balanced look at June 2016's Council that took place on the island of Crete, in which participated ten of the fifteen Local Orthodox Churches. Fr. Peter's talk covers the long process leading up to the council, the events that occurred during the council, and the documents produced by it. Through his examination of the theology and procedures of the council, Fr. Peter demonstrates that it is not a true representation of the Orthodox Church and its Orthodox faith. Bertinos7/14/2017 10:07 am
On the 17/30th of June 2017, the Extraordinary Double Holy Synaxis of the Holy Monasteries of Mount Athos issued a statement on the Crete Council", discussing among other thing the "walling off" and "cutting off" of local bishops.

The tekst can be found at http://www.romfea.gr/images/article-images/2017/06/DIPLI_CRETE.pdf
An English translation is provided by http://www.johnsanidopoulos.com/2017/07/a-message-from-mount-athos-regarding.html

Matthew Siegmann4/8/2017 3:35 pm
Could we get come clarification on who has asked the monastics to leave the cells?
×