Romanian Chamber of Deputies overwhelmingly votes to constitutionally define marriage as one man, one woman 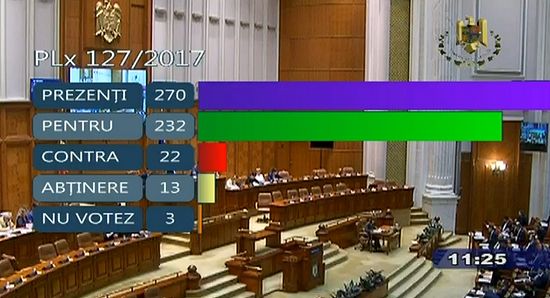 The Romanian Chamber of Deputies, the lower house of the Romanian Parliament, has overwhelmingly voted in favor of amending the national constitution to explicitly define marriage as the union of one man and one woman, Coalitia pentru Familie (The Coalition for Family) reported Tuesday.

Their vote of 232 in favor out of 270 also included the strengthening of parental rights.

Note that this is a citizen’s initiative, with 3.1 million signatures collected by The Coalition for Family. Only 500,000 signatures are required to promote an initiative to parliament. “This is a historic moment,” said Mihai Gheorghiu, one of the leaders of the Church-backed Romanian initiative, said at the time. “In an unprecedented show of solidarity, 3 million Romanians signed this proposed amendment,” he said.

The proposed amendment to Article 48, paragraph 1 of the Romanian Constitution reads, “The family is founded on the freely consented marriage between a man and a woman, their full equality and the right and duty of parents to ensure the upbringing, education and instruction of children.”

The Constitutional Court of Romania approved the legislative proposal on the revision of the Constitution initiated by The Coalition for Family on July 20, 2016, noting that it met all constitutional demands. The initiative has found broad support from all Christian denominations, including Orthodox, Catholic, and Evangelical, as well as international legal groups such as ADF International, Liberty Counsel and the European Center for Law and Justice also helped.

This vote comes after both legislative chambers had been stalling, claiming a lack of competency in making a decision, although the nation’s constitution requires them to take action once an initiative has met all constitutional demands. During campaigning, the Social Democrats and the Liberals, the nation’s two biggest parties, signed written agreements in favor of the people’s initiative, but then were slow to act.

If the Romanian Senate also votes in favor of the amendment then the referendum will automatically be scheduled for the last Sunday of the following 30-day period.

Meanwhile a same-sex marriage case has come before the Romanian constitutional court, which is now to be ruled on by the European Court of Justice. Romanian Patriarchate calls on Lower House to reject legislative proposal on civil partnership
According to the cited source, “ever since the oldest times, the Romanian people have cultivated the legacy of utmost respect towards the family, called the Church at Home, being satisfied that this is instituted and blessed by God.”
Comments
×