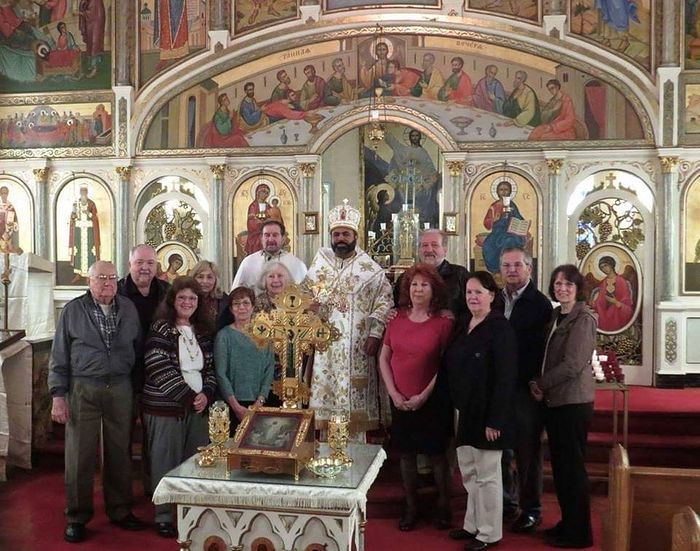 In recent months, two parishes of the Eastern PA Diocese of the Orthodox Church in America have independently abandoned the Orthodox Church, uniting themselves to unrecognized, schismatic bodies. The site of the Diocese of Philadelphia and Eastern PA has published two letters of Abp. Mark (Maymon) in which he addresses the canonical status of St. Nicholas Independent Congregation in Philadelphia, PA, and Holy Resurrection Church in Alden Station, PA, noting that faithful Orthodox Christians may no longer worship or participate in any Sacraments in these former parishes.

In his letter regarding the status of St. Nicholas parish, Abp. Mark writes that as the members of the parish have willfully chosen to join a schismatic body, they have excommunicated themselves from all canonical Local Orthodox Churches worldwide and may not receive the Sacraments in any parishes of the recognized Local Churches, and no other canonical hierarch may restore them to communion. “Additionally, all Orthodox faithful are forbidden to participate in the services of schismatics lest they also excommunicate themselves as well,” he continues.

The parish refused a canonical priest from the Orthodox Church in America in December 2016, in protest of their hierarch asking for the parish’s financial records. The parish has since decided to join the schismatic, so-called Kievan Patriarchate, which is well known for persecuting the canonical Ukrainian Orthodox Church. This is confirmed by a message on the Kievan Patriarchate’ site, which states that the parish petitioned to join their jurisdiction, which was granted, and on January 8, 2017, the community decided to adopt Fr. Bogdan Zgoba as their priest. Interestingly, Abp. Mark writes in his message that “Mr. Bogdan Zgoba… is a former priest of the non-canonical Ukrainian Orthodox Church of the Kyivan Patriarchate under Patriarch Filaret,” who had been deposed by the same jurisdiction.

In the message concerning Holy Resurrection Church in Alden Station, Abp. Mark notes that a meeting was held in which the parish also decided to separate itself from holy Orthodoxy and unite with another schismatic body, having never dialogued with the diocese about any concerns beforehand. As with St. Nicholas’, the hierarch of Eastern PA writes,

Any group or person(s) not in communion with the above Churches is not recognized as Canonically Orthodox or as being in Communion with these Historic Orthodox Churches to which you have belonged for the last 100 years in this country… If you decide, however, to continue on this course you excommunicate yourselves by your own actions and may no longer receive any ministrations of an Orthodox priest. The faithful of the Orthodox Church may no longer commune at Holy Resurrection. Until this is resolved, no further pastoral care or services will be performed by an Orthodox priest for you and your parishioners, unless you go to another Canonical Orthodox Church to receive the Sacraments.

Holy Resurrection Church has decided to join the jurisdiction of the schismatic “Palestinian Orthodox Church of America,” led, as Abp. Mark explains, by the schismatic “archbishop” Ramzi Mussalam who has a history of belonging to schismatic groups, and was defrocked as a priest by the Russian Orthodox Church Outside of Russia not long after being received into the Church. Mussalam now styles himself as “Archbishop Melchisedek.” Accordingly, the Eastern PA Diocese has removed the antimens, the reserve Sacrament, the Holy Chrism, and the Holy Unction from the parish.

Holy Resurrection reportedly made this decision under the influence of St. Nicholas’ in Philadelphia.

Abp. Mark writes, “Likely, you will be assigned a priest who was deposed by a canonical Church as well,” and Holy Resurrection is now reportedly being served by “Fr.” Michael Pasonick, a former deacon of the OCA who had been laicized by his own request before serving a jail sentence for a bribery conviction. Pasonick’s name appears on the “Palestinian Orthodox Church of America” site as the priest in charge of the young adult and youth ministry, and he can be seen in pictures with the “archbishop” on the latter’s Facebook page.

All faithful Orthodox Christians should be aware that, given the actions and schismatic loyalties of these two former parishes, it is forbidden and spiritually damaging to participate in Sacraments at these churches, until, as Abp. Mark writes, they repent and return to the Orthodox Church.

Orthodox Churches clearly expressed their attitude to Ukrainian schismatics. Did Philaret understand?
Tamar Lomidze
Forgetting Christ’s commandments, embracing ethnophyletism, giving preference to a Caesar, serving Mammon—all of these are symptoms of a serious disease that has affected schismatics of the so-called “Ukrainian Orthodox Church of the Kyiv Patriarchate” as a result of their falling away from Orthodoxy.
Comments

I'd like to communicate with other Orthodox christians from America.

Fr Sergei3/31/2018 4:26 pm
A quote from a very insightful letter concerning those who unilaterally make condemnations of "gracelessness" about the mysteries of other Orthodox in this time of troubles:

(St Basil the Great - Selected letters (Schaff) Letter
CLXXXVIII - To Amphilochius)
"So it seemed good to the ancient authorities to reject the
baptism of heretics altogether, but to admit that of
schismatics, on the ground that they still belonged to the
Church."
Tread wisely, not foolishly. Only God knows who is in his flock and who isn't ... not some weak and feeble human mind.

Chris Schaeffer8/1/2017 11:54 pm
The Bishop has every right to see the financial health of the parish, who are they to say no to their Bishop. Maybe instead of jumping to conclusions that he wanted to sell the property. I can tell you, first off I grew up in that neighborhood and my husband is a real estate developer who has financed most of the properties their, where15 years ago you couldn't go out after 5pm, they even had a priest kidnapped, it would make more sense to hang onto the property fix it up and go out and get involved with all the new people who have moved into the neighborhood. Growing the parish shouldn't be so hard, it's the place to be in Philadelphia and the surrounding neighborhoods aren't too shabby either. It takes a thinking and doing group, maybe the Bishop wanted to send them a young priest? But to excommunicate your parish over MONEY are your souls worth so little to you? It's like kicking your mother out of your house and never speaking to her again no matter how much she cries and sobs over you! Think about it St Nicholas!!!!

Alan7/9/2017 7:16 pm
This situation stinks to High Heaven.
I hope we are not going to become like Anglicans with constant bickering.

Sub-deacon Gregory7/8/2017 11:42 pm
With St. Nicholas church, which was incorporated in 1917, the issue was real estate. Abp. Michael have demanded the deed of the property. His intent was to close down the church because of dwindling numbers of parishioners and sell it to developers. Council had no choice but to abandon the OCA.

M. C.7/8/2017 1:07 am
Concerning Orthodox Christian,
This news article is simply stating the fact that these parishes have broken away from their jurisdiction and come under non-canonical "bishops". The parishes themselves have not responded. In the Orthodox Church, we submit to the rule of our bishops unless they become heretics. If this matter deeply concerns you, perhaps you can attempt to talk to them yourself.

Concerned Orthodox Christian7/8/2017 12:28 am
Alex,
Who at St. Nicholas (in Phila.) did you attempt to contact? Per your response above, you stated "You have no reason to doubt what Abp. Mark has written" how is that justified if you have not spoken to all parties involved....

Deacon Nicholas7/7/2017 6:36 am
Anthony, your comment about CIA is completely wrong. I spent 26 years with CIA and I'm an Orthodox deacon (OCA). This schism is entirely home-grown.

This is a site about Orthodox Christianity. Of course we are "one-sided" against schismatics that leave the Orthodox Church. We have no interest in justifying schism, and we have no reason to doubt what Abp. Mark has written. We spoke directly with knowledgable contacts in the Eastern PA Diocese.

However, we did reach out to St. Nicholas, and they were unresponsive.

Shakira Kinesia7/6/2017 10:36 pm
Did they think to call and speak directly to the Archbishop? Apparently, their lack of communication is because they were asked for financial records. That is troubling. If this is not the case, I think we all would like to be enlightened by someone who knows.

Alex uram7/6/2017 8:27 pm
Who wrote this article? It is so disingenuous and one sided. Did anyone at this website think to pick up the phone and call these parishes to get an idea of what's really happening?

Anthony7/6/2017 6:31 pm
Does the CIA have anything to do with this? Seeing as they are hell bent (if you'll pardon the pun) on dividing and destroying the Orthodox Church, with the aid of some very high ranking officials (nominally) in the Church (I shall desist from naming and shaming), this would not surprise me in the least.
×