Russian representation church in Jerusalem to reopen after years of restoration 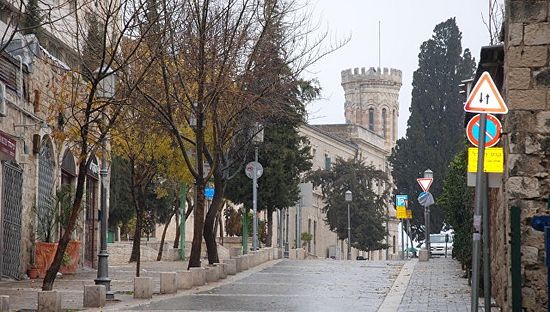 The Russian Sergius Podvoriye in Jerusalem, returned to Russia nine years ago, will reopen today, following the completion of its restoration, the Deputy Chairman of the Imperial Orthodox Palestinian Society (IOPS) Elena Agapova reported to RIA-Novosti.

The Sergius Podvoriye in Jerusalem was built at the end of the 19th century with funds from the IOPS and its founder Grand Duke Sergei Alexandrovich Romanov. It was entrusted with the management of all representation churches, schools, and hospitals in Syria and Palestine.

The date for reopening the Sergius representation church after its restoration was not accidental, the IOPS notes. “The Russian Orthodox Church venerates the memory of St. Sergius of Radonezh today—the heavenly patron of Grand Duke Sergei Alexandrovich, the first chairman of the IOPS. July 18 is also the commemoration day of (his wife) Grand Duchess Elizabeth Feodorovna, martyred 99 years ago,” explained the ceremony organizers.

The event is to be attended by IOPS head Sergei Stepashin, Russian ambassador to Israel Alexander Shein, Jerusalem mayor Nir Barkat, Israeli ministers, and representatives of the country’s cultural and business societies.

The Sergius Podvoriye was built from 1886 to 1889 by Jerusalem architect George Frangia, with funds from the IOPS and its founder Grand Duke Sergei Alexandrovich Romanov. The building was registered to the grand duke personally, and unlike many other objects of Russian property in the Holy Land, it was never transferred to the USSR. Under the control of its Israeli guardian, it avoided being sold under Nikita Khrushchev.

Israeli authorities re-registered the podvoriye as a property of the Russian Federation in December 2008. Taking part in the negotiations was Russian president Vladimir Putin, whose first visit to Israel in 2005 was a huge impetus in the process of restitution. The Russian government allocated $10 million for the restoration of the podvoriye, which began in 2011 after the last tenants from a number of Israeli government agencies vacated the building.

The Imperial Orthodox Palestine society is the oldest Russian academic and humanitarian non-governmental organization, established by decree of Emperor Alexander III in 1882. The society carries out humanitarian, educational, peacekeeping, and research missions aimed at the preservation of the spiritual ties of Russia with the Holy Land, the heritage of Russian Palestine, and the strengthening of the Russian Orthodox presence in the Biblical region. Charles, Prince of Wales, Visits the Russian Convent in Gethsemane
On Friday, September 30, 2016, concluding his visit to Israel for the funeral of Shimon Peres, Prince Charles of Wales visited Gethsemane Russian Orthodox Convent. Appeal by Archimandrite Roman (Krassovsky), Chief of the Russian Ecclesiastical Mission in Jerusalem, to the Pilgrims and Benefactors of its Monasteries in the Holy Land

Appeal by Archimandrite Roman (Krassovsky), Chief of the Russian Ecclesiastical Mission in Jerusalem, to the Pilgrims and Benefactors of its Monasteries in the Holy Land
With the gradual, and very difficult, de-mining of this site, consecrated by the asceticism and tears of the Forerunner of the Lord John, St Mary of Egypt and many hermits, access will be opened to our Mission’s parcel, which will allow us to expand, with God’s help, our service in the Holy Land.