Why we should not fear the end of the world, or What in actual fact brings us closer to destruction 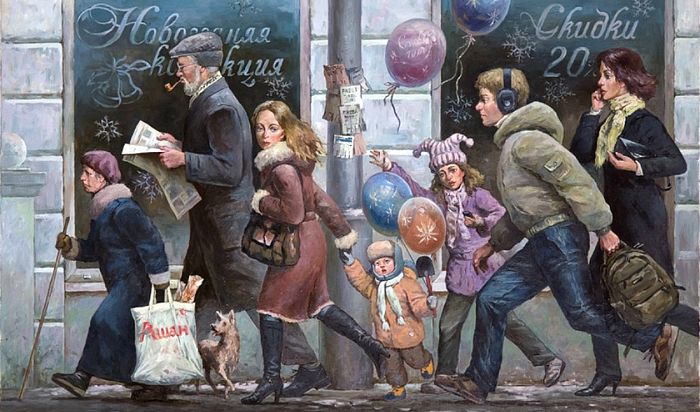 Our Lord’s discourse on the outward circumstances of the end of the world and on the glory of His second coming is set forth in Chapter 24 of the Gospel of Saint Matthew. Apart from the commonly conceived apocalyptic picture of wars and strife, this discourse contains certain details which are usually overlooked; and this is perhaps not by chance.

Let us consider the Gospel text. While answering His disciples’ question on the signs of the end of the world, our Savior warns them of the danger of false prophets and of social and environmental cataclysms: Take heed that no man deceive you. For many shall come in my name, saying, I am Christ; and shall deceive many. And ye shall hear of wars and rumours of wars: ... For nation shall rise against nation, and kingdom against kingdom: and there shall be famines, and pestilences, and earthquakes, in divers places (Matthew 24:4-7). These particular Gospel passages often underlie common views of the ultimate fate of the world. However, these views quite distort their meaning. When speculating on the theme of the end of the world, the Hollywood film industry, as well as various sectarian organizations and adherents of the ideology of consumerist society, actively cultivate, first of all, a fear of the future in our collective consciousness. And this speculation is by no means just a harmless play on people’s nerves. The goal is more subtle – to distract us from the main point.

If we pay close attention to the Gospel text, we see that their emphasis is on something different. Christ by no means wishes to sow fear in his disciples. On the contrary, He says, see that ye be not troubled: for all these things must come to pass, but the end is not yet (Matthew 24:6). In explaining these words of our Saviour, Saint John Chrysostom says that the true disciples of the Lord “will be above all misfortune”: no external discord will be able to shake their zeal for faith and for the virtuous life. In the opinion of the Saint, Christ, while testifying to this fact, points out that in the face of troubled conditions worldwide, this gospel of the kingdom shall be preached in all the world for a witness unto all nations (Matthew 24:14). In other words, lest the disciples fall into despondency and say, “How shall we live?” it is as if the Lord would say, “You shall live, and teach everywhere.”[1]

This first important point is the opposite of the popular version of the end of the world. And Orthodox Christians should be well aware of this: for it is unacceptable for a man who trusts God, who seeks to live with God, to yield himself to any terror of the future, any panic or fear – this is a sign of proud self-reliance, and not of virtuous concern for our own salvation.

The second point of the Gospel understanding of the ultimate fate of the world is no less important. Unfortunately, it is also often understood in a distorted form, namely about “love growing cold.” The Lord says that because iniquity shall abound, the love of many shall wax cold (Matthew 24:12). Usually this point is presented as some sort of social collapse through the spread of mass intolerance in society: People, they say, will turn into beasts and begin to destroy each other. One consequence of such a conviction, which is rarely expressed clearly, is the search for a plan of social welfare that prevents social conflict at any cost. That is, at a subconscious level, people fear “sharp edges,” they are afraid to insist on traditional values insofar as this might lead to social pressure and conflicts, and so on. Thus, contemporary western models of tolerance for sin have, evidently, their deep mental basis in a fear of the end of the world, in a myth based on an incorrect understanding of the Gospel, which today continues to be actively supported, but now through more subtle techniques.

How should we understand the words of Christ on “love waxed cold?” One of the ancient commentators says that this primarily has to do with the cooling of love for the Truth: “The words of this multitude of teachers of doctrines opposed to the truth (i.e. false prophets – Fr. R.S) bring about such harm that they cause even a fervent love for truth, which formerly consisted in simplicity of faith, to cool due to their conception of the Divine mysteries.”[2] And, actually, the Savior directly links this “cooling of love” to the “abounding of iniquity,” namely to the distortion of Truth, in consequence of which, as Saint John Chrysostom writes, “the disciples will not be able to find consolation even in love!”[3]

The apocalyptic “cooling of love” is not an increase of hatred,
but a perversion of the true understanding of love.

Thus the apocalyptic “cooling of love” is not simply a change of the relationship between people, nor an increase in hatred, but something else. It is primarily a perversion of the true understanding of love! False prophets of the last times (both public and religious leaders) will wrongly interpret this supreme virtue, so that the followers of Christ will not be able to rejoice in such a “love.” It is entirely possible that we are talking about a kind of understanding of love which really leads to the diminution of social pressure, to the establishment of a harmonious society without “sharp edges,” without conflicts of ways of life. However this is not love as a Divine gift, but rather a mutually satisfactory bargain for the sake of comfort: everyone must give up firm convictions of what is proper, godly, and true, and acknowledge the relativity of all values for the sake of social peace and prosperity. It is precisely the fall of this outpost of love, its perversion to such a degree, that in the name of this virtue that iniquity will be committed, that is the clear sign of the fact that mankind has set forth on the path that leads to destruction. After all, if the Lord says concerning wars and cataclysms, but the end is not yet (Matthew 24:6), the Saviour concludes the discourse about the distortion of Truth by false prophets, about the cooling of love and about the preaching of the Gospel for a witness to all the world with the words, and then shall the end come (Matthew 24:14).

And so we see the patristic understanding of the prophecy of our Savior on the ultimate fate of the world is essentially opposed to that myth about the Apocalypse which is actively propagandized in the mass consciousness. If the latter has as its goal to create a terrifying picture in people’s imagination of disasters and social strife engendering fear, then the Gospel portrayal, on the contrary, encourages the faithful, and spurs them to courage and steadfastness, to always hold to the Truth – and the Lord will save His faithful.

If the popular ideology purposefully focuses on social conflict so that people are subconsciously inclined to seek the resolution of these conflicts at any cost – then the Gospel clearly sounds the warning of the danger of a “cooled-off love,” of love deprived of faithfulness to the Truth in exchange for social comfort – it is precisely that smart “love” which leads the world to destruction. That is what we really need to fear – this perversion of love and its conversion from the supreme virtue to the handmaiden of comfort. Anthony7/21/2017 7:36 pm
Well we see this all the time - the banner ''Love not hate'' with the rainbow flag in the background. And Madonna screeching ''love not hate'' along with her creepy followers who threaten violence against Trump and his supporters. The list goes on.

How anyone cannot worry about the things that must come to pass before the Second Coming is beyond me. Today my blood waxed cold as I read the news that the Aegean was hit by a massive earthquake. Mitr. Morfou, Neofytos spoke about the coming earthquake back in April just before Pascha. He said that when a huge earthquake hits Greece, then this was prophesied by some holy Fathers as being prelude to the third world war.

For anyone fortunate and blessed enough to understand Hellenic: