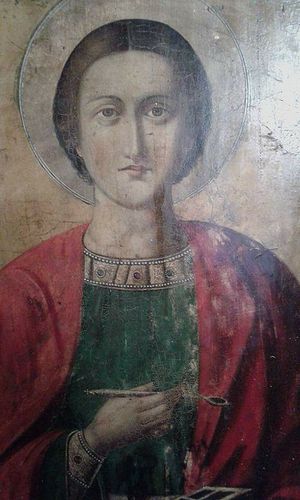 Photo: facebook.com
According to reports from clergy of the St. Panteleimon Church in Arseni, Greece, 47 miles west of Thessaloniki, an icon of St. Panteleimon has begun streaming tears. This was reported on July 27 by Mayor Katerina Ignatiadou of Skydra on her personal Facebook page.

The tears appeared on the icon at 3:30 PM on July 27, on the eve of the new calendar celebration of the great martyr and healer. The tears are running from both eyes and can be seen in the photos of pilgrims, including of Mayor Ignatiadou.

Another icon of St. Panteleimon began streaming myrrh last July in the Russian Sretensky Convent in the city of Ulan-Ude, near Irkutsk, after the icon had “visited” the house church of a home for invalids by the blessing of Igumena Niki, abbess of Sretensky Monastery.

Oily drops of liquid had appeared on the icon already two years ago. When it returned to the monastery from the invalid home, myrrh was already trickling from the chest and even from the instrument in the hands of the Great Martyr Panteleimon. Oil was covering the entire image and had gathered at the bottom of the icon.

The precious head of St. Panteleimon was recently taken from St. Panteleimon’s Monastery on Mt. Athos to the canonical territory of the Bulgarian Orthodox Church from July 26 to August 2, where thousands of faithful had the opportunity to venerate it. Icon of Savior miraculously renewed in Uman, Ukraine
An icon of the Lord Jesus Christ, miraculously renewed while in storage in a repository, has been entered into the permanent “The Mysterious World of Orthodox Icons” exhibition in the Uman Museum of Local Lore in central Ukraine. Icon of Great Martyr and Healer Panteleimon begins to stream myrrh in women’s monastery in Buryatia
“Even unbelievers come to pray. There’s a piece of his relics in this icon. Many churches and prayer chapels in various medical institutions are consecrated in honor of the holy Great Martyr and Healer Panteleimon. Many revere the holy physician, turning to him for help. Now pilgrims come especially to the Sretensky Monastery to pray at the icon of the holy Great Martyr and to ask for healing and consolation for themselves and their loved ones.”
Comments