Archpriest Victor Potapov: “I Believe that the Reunification of the Church Was the Result of the Prayers of St John of Shanghai”

Mitred Protopriest Victor Potapov of the Russian Orthodox Church Outside of Russia, Rector of St John the Baptist Cathedral in Washington, DC, is renowned throughout the world, including Russia. He broadcast reports on spiritual matters over the Voice of America for 30 years.

His parish is an active one, which responds eagerly in times of need. For instance, they collected a large amount of money for “Dobrota” Fund in Donetsk, which helps children injured in the civil war. The parish celebrates Maslenitsa every year at the Russian Embassy in Washington, DC, and the youth organize an annual Tatyana Ball every January.

Fr Victor has written many articles on theology, church history and human rights.

He was born on December 24, 1948, in a displaced-persons camp in West Germany to Sergei Mikhailovich Potapov and his wife Praskovia Ivanovna (nee Golik). In 1951, the family moved to the United States.

Fr Victor was interviewed in his cathedral, which was feverishly preparing for a summer scout camp. 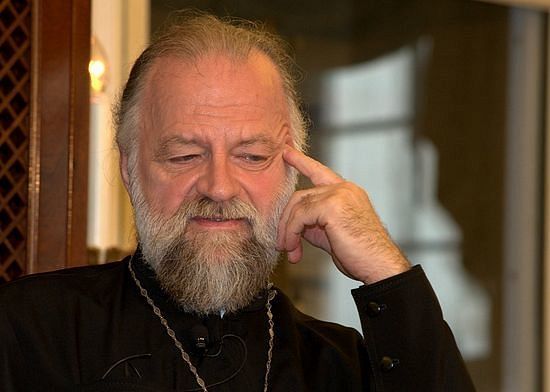 —What is large can only be seen at a distance, they say. What can you say about Russia today?

—We closely follow Church life in Russia here, maybe not to the degree we should, for we have our own matters to tend to in America. We minister not only to Russians, but to Americans who convert to our faith. We love Russia and suffer the negative, Russophobic tendencies of the West, especially in the USA.

I am convinced that people here have a hard time understanding religious life in Russia. Western journalists emphasize the negative. There will always be problems everywhere, people are people, after all, and the Church consists not only of holy people but of sinners. They don’t notice positive aspects of Church life in Russia. I am happy about what is happening in Russia, not the external things, but the striving of people towards liturgical life.

Over a million people have venerated the relics of St Nicholas of Myra the Miracle-worker recently. People stood in line for 7-8 hours just to spend 1-2 seconds kissing the relics and pray. This says something about the spiritual life of the people who hunger for spiritual nourishment.

—It is sad that some people actually laugh at this.

—The Washington Post just had a Facebook item with snarky commentaries. For instance, Muscovites are willing to stand in line for hours just to venerate the relics of St Nicholas, who is known in the West as Santa Claus. They ask why, then answer: to be healthy, to do well on exams. They have a superficial attitude, they don’t understand what is happening in Russia.

—In your opinion, why are parts of the Russian mass media skeptical about Orthodox life in Russia?

—Man has a sinful nature: it is much easier to discuss scandals, point out evils, than to have a spiritual conversation, to regret one’s own fallen nature. The Gospel says “And why beholdest thou the mote that is in thy brother's eye, but considerest not the beam that is in thine own eye?” This is nothing new.

—People ask on Orthodox Christian websites: how do we respond to criticism of the Church, should we tolerate it, pay any attention?

Some clergymen in Russia find the courage to say: let us refuse luxury, expensive cars, let us attract people to religious life through personal example, not only in word, but in deed.

Sometimes one should consider whether criticism and accusations have merit. We clergymen should avoid providing fodder for such criticism.

—Another difficult question for Orthodox Christians is Ukraine…

—Our hearts bleed for Ukraine, half of my parishioners are Ukrainians, I am half Ukrainian myself, my wife, Matushka Maria, is a great-granddaughter of Mikhail Rodzianko. We pray for peace in Ukraine at every Liturgy.

There is an artificial division in the Church, antagonism is imposed from without. We empathize with His Eminence Onouphry of Kiev and All Ukraine, of course, he’s having a very difficult time, he is a genuine spiritual ascetic and is trying to restore peace. He keeps saying: Christ must be foremost in our minds, everything else is secondary. We also commemorate His Holiness Patriarch Kirill of Moscow and All Russia at every Liturgy, we pray for the strengthening of faith and of the Church in both Russia and Ukraine.

—We recently marked the 10th anniversary of the unification of our Churches; what can you say about this?

—I rejoice that ten years ago, the Primates of the Moscow Patriarchate and of ROCOR found the spiritual wisdom to overcome division between the two branches of the Russian Orthodox Church, and commence restoration of Eucharistic unity. The late Patriarch Alexy II and Metropolitan Laurus of Eastern America and New York signed the Act of Canonical Communion, healing the ninety-year division in the Russian Orthodox Church.

It is noteworthy that both hierarchs were born outside of Russia. The Patriarch was born in Estonia, of course, and Metropolitan Laurus was born in Carpathia. The Lord specifically chose them, since both likely understood the abnormality of the situation and the need for healing.

—What are the positives that you see?

—This blessed beginning has benefited the Church. It gives us the opportunity to serve together, we now have one Church, we commune of the Holy Gifts and celebrate Liturgy together.

Clerics from Russia visit us, whom we welcome with open arms; for instance, we recently had Metropolitan Ilarion of Volokolamsk celebrate services at our cathedral. We travel to Russia and they likewise welcome us with love. We celebrated that important event at a seminar in Moscow’s Sretensky Monastery titled “St John of Shanghai, the Unifier.”

—You were a delegate at that Church Council at which the all-important decision was made; can you tell us about it? 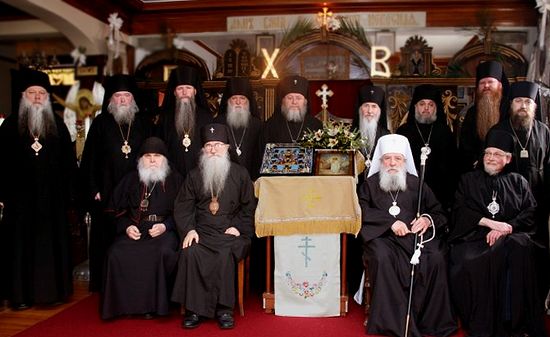 —In May, 2006, the 4th All-Diaspora Council of the Russian Orthodox Church Outside of Russia was held in San Francisco, at which the matter of reunification was discussed. I believe that the reunification of the Church was the result of the prayers of St John of Shanghai. The debates were difficult, not all the delegates supported unity. Many people spoke, and the optimism that I shared with some delegates faded after a few hours, it seemed we could never achieve unanimity.

At one point, it was proposed that a resolution on Eucharistic communion with the Moscow Patriarchate be drafted. Protopriest Alexander Lebedeff, the Secretary of the Council and Rector of Transfiguration of the Lord Cathedral in Los Angeles, told me that the process was difficult and at one point they reached an impasse.

Then they decided to have a recess, and to go to the cathedral and pray to St John of Shanghai before his very relics. A draft resolution was placed on his chest, along with a list of names of the delegates of the Council. Fervent prayer then instilled in us the confidence that everything will happen according to God’s will. After the moleben, the drafting of the resolution went smoothly.

Metropolitan Laurus surprised everyone by proposing that we vote not on the entire resolution, but on each paragraph individually. Most of the delegates voted for unification. I sensed that St John was with us!

In 2007, the important historic event took place, the signing of the Act of Canonical Communion.

—You have a lot of young people in your parish, how are you able to keep them engaged?

—Our parents reared us with the understanding that we must preserve the Orthodox Christian faith, our Russianness, our language. It’s not easy. It’s very easy to assimilate to American culture.

Young parents who recently immigrate to the US but never went to church in Russia want to have their kids Orthodox Christian, to speak Russian. Within the walls of the church, children come to the faith, learn to love God, they hear the Russian tongue…

—You are talking about parish life…

—Yes, parish life and through the scout organizations.

Our scouts gather at the parish twice a month. Every summer, the kids spend two weeks in camp in a picturesque area of Virginia. The kids erect their own tents, make an iconostasis out of branches and install icons in them. One of our priests celebrates Divine Liturgy there, under the open skies. We priests also live in tents.

—Your kids are also taught dancing.

—We have a dance troupe called “Matryoshka.” Our ladies teach Russian folk dancing, and the kids perform in traditional Russian costumes. Boys and girls are taught Russian dancing and love for Russian folk culture, and they get to know each other better.

—Your parish is bilingual?

—We celebrate two Liturgies every Sunday, in English and Slavonic. We have American parishioners, Romanians, Serbs, even some Chinese people. After early Liturgy, everyone goes to the hall to have breakfast, and after the second Liturgy, to lunch. The parishioners prepare the meals themselves.

We have Russian and English Sunday schools, where we teach the Law of God. Father Victor`s Washington
Tatiana Veselkina
I stood at one side and marveled at the mosaic shining in the sunlight, the tile-work of the church rising to the sky… St John the Baptist Cathedral in America’s capital was built in the Muscovite-Yaroslavl style of the 17th century, like a carved statuette sitting in the palm of one’s hand. There are only a handful of such churches in Orthodox America. How is it that a church devoted to such a sad event came to be in this intellectual, refined city of Washington?
Comments

Anthony8/17/2017 10:38 am
Quick quezzie. We Orthodox say that Christ's Body cannot be divided. So when two Orthodox canonical jurisdictions break Comumunion with one another then what do we say?
×