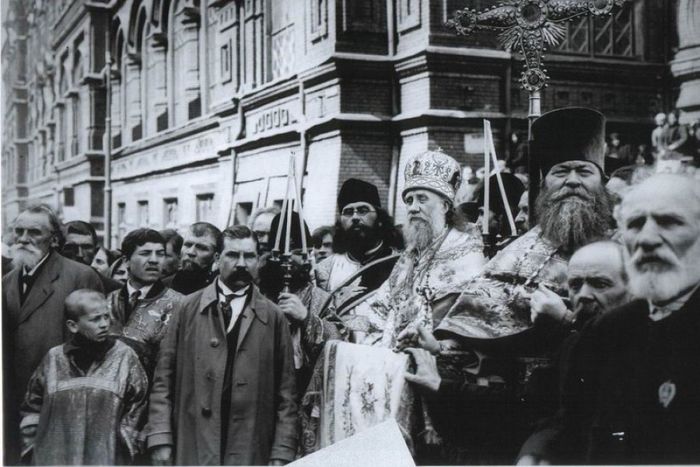 With the blessing of His Holiness Patriarch Kirill of Moscow and All Russia, and in accordance with the decision of the Holy Synod of the Russian Orthodox Church, on August 28, on the feast of the Dormition of the Mother of God, a moleben will be celebrated in all parishes of the Russian Church in honor of the glorified members of the 1917-1918 Local Council, the opening of which took place in 1917 on the feast of the Dormition, and a memorial for all other participants in the council, reports patriarchia.ru.

Following the festal Divine Liturgy, the patriarchal epistle on the occasion of the centenary of the Local Council of 1917-1918 will also be read out. Patriarch Kirill will celebrate the Divine Liturgy for the feast in the Patriarchal Dormition Cathedral of the Moscow Kremlin.

In his epistle, the patriarch called on all the faithful to deeply consider the seriousness of the 1917-1918 Local Council. “I am deeply convinced that its legacy requires serious and thoughtful study, and many of the ideas expressed then would be useful and in demand today,” the patriarch underlined. He laments that, despite the events of the preceding century, the council has not been comprehended or properly appreciated by Church people.

The primate goes on to note that some of the council’s decision were subsequently enacted in Church life, and some not, with the most obvious obstacle being the revolutionary events sweeping the nation at the time. Noting that today the Church carries out its ministry in peaceful conditions, Patriarch Kirill called for “prayer to reflect on the outcome of the council's actions, to answer the question of why, in spite of many obstacles, some council resolutions have been implemented and have found their place in the life of the Church, while others on the contrary were not viable and were not assimilated into the ecclesiastical consciousness.”

His Holiness also recalls in his epistle that many participants in the council gave their lives as martyrs for Christ, showing us an “example of steadfastness and courage in trials.”

At its May 4 session at Moscow’s Danilov Monastery, the Holy Synod of the Russian Orthodox Church resolved to establish a new feast glorifying the holy fathers of the 1917-1918 Local Russian Church Council, to be celebrated on November 5/18, the day of the election of St. Tikhon to the Muscovite patriarchal throne. Feast of Holy Fathers of 1917-1918 Local Russian Council established
At its May 4 session at Moscow’s Danilov Monastery, the Holy Synod of the Russian Orthodox Church resolved to establish a new feast glorifying the holy fathers of the 1917-1918 Local Russian Church Council, to be celebrated on November 5/18, the day of the election of St. Tikhon to the Muscovite patriarchal throne. The Moscow Council of 1917-18
Fr. Ted Bobosh
The recent Holy And Great Orthodox Council in Crete inspired me to read about another Orthodox council, The Moscow Council (1917-1918) from a book written by Hyacinthe Destivelle. This Council was held in the midst of most interesting and tumultuous times as Russia was in the spasms of its revolution which would overthrow the dominant social order of their empire. The Church leaders and membership at times resisted the changes, at times prompted the changes and at times was pushed and carried along by the changes.
Comments
×