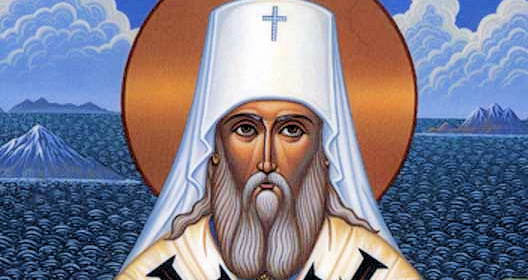 The Irkutsk Province Film Fund has completed shooting for the film “St. Innocent (Veniaminov): A Glorious and Honored Name: The Return Home,” which is dedicated to the well-known Orthodox missionary who was born in the Irkutsk Province and became the metropolitan of Moscow and was canonized as the Apostle of Siberia and Alaska. Editing, color correction, and scoring is currently underway, reports the site of the government of the Irkutsk Province.

The film tells about the ascetic’s service to God. The genre can be defined as a film-pilgrimage to the places of the holy hierarch’s service. The film offers overhead views of the places where he lived and served as a missionary. According to those involved, it is not simply a biopic, narrating his path from deacon to metropolitan. The film includes living people on screen—servants in the Church, artists, and students of Orthodox schools. Acquaintance with the saint comes through communication with them.

Filming began in 2015 and took place in the saint’s homeland—in the village of Anga, in Irkutsk, Angarsk, Kachug, Bodaybo, Moscow, Sergiev Posad, St. Petersburg, Blagoveschensk, Petropavlovsk-Kamchatka, Kharabovsk, and in the Republic of Buryatia. The final phase was work in Alaska, from where the film group returned in the first half of August this year. Additionally, in 2016, in cooperation with the expedition “Baikal-Alaska,” filming was done on the Lena River, in Yakutsk, and in Lensk.

The project was realized with the blessing of Metropolitan Vadim (Lazebnoi) of Irkutsk and Angarsk. Film production has the support of the government of the Irkutsk Province and the Ministry of Culture and the Archives of the Irkutsk Province. Work on the film was completed with grant funds from the President of the Russian Federation for supporting creative works of national importance in art and culture.

St. Innocent was the first Orthodox bishop of Kamchatka, Yakutia, Priamurye, and North America. He created the alphabet for the Aleutian language. He was elected as the metropolitan of Moscow in 1868. He was canonized as the Apostle of Siberia and America in 1977. St. Innocent of Alaska, Metropolitan of Moscow
Commemorated September 23/October 6 (glorification) and March 31/April 13 (repose)
He built a church with his own hands, traveled to remote areas by kayak, dog sled, even reindeer. He learned six dialects of the native language and developed the first written alphabet for the native Aleuts. He translated the Bible and other sacred books into their language. Years later, he also translated scriptural books into other Alaskan native languages.
Comments

Matushka Elizabeth9/5/2017 6:17 pm
Who is doing the subtitles in English? Americans in the lower 48 have a deep devotion to St. Innocent.
×