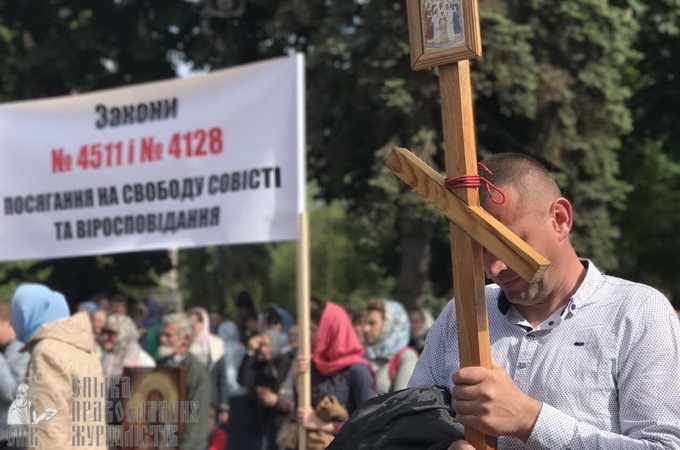 The Verkhovna Rada, the Ukrainian parliament, will consider at its seventh session, already underway, 11 bills belonging to the religious sphere. All the bills are included in the draft agenda of the day, which was still awaiting approval earlier today, reports the Union of Orthodox Journalists.

Among the bills are several that are widely regarded as being specifically aimed against the canonical Ukrainian Orthodox Church, and another that proposes to name the self-proclaimed Patriarch Filaret as a “Hero of Ukraine.”

There are three anti-Orthodox bills that have been criticized both in Ukraine and abroad:

№ 4128: On amendments to the Ukrainian law “On Freedom of Conscience and Religious Organizations” (regarding the religious affiliation of a community being changed)—a bill that, according to most experts, will legalize church raiding in the country.

№ 4511: On the special status of religious organizations with administrative centers in states deemed as aggressor states by the Verkhovna Rada—although the text does not specifically mention the Ukrainian Orthodox Church of the Moscow Patriarchate (UOC-MP), experts recognize that the bill is aimed specifically at discrimination against the UOC-MP.

In addition to these, there are other bills touching about chaplaincy service:

№ 4485: On amendments to the Ukrainian law “On Alternative (Non-Military) Service” (regarding the timing of submitting an application)—regulates the alternative service of believers during mobilization.

№ 6643: On amendments to several legislative acts of Ukraine concerning the social protection of military chaplains during anti-terrorism operations—equalizing chaplains with soldiers in terms of guarantees.

The parliament will also consider two bills concerning the statutes of religious organizations:

№ 6642: On amendments to the Ukrainian law “On State Registrations of Legal Entities, Individuals-Entrepeneurs, and Public Formations” (according to the registration documents of religious organizations)—cancels the notarization of the statutes and protocols of the general meeting.

Other laws that the Verkhovna Rada will consider include:

№ 1012: On amendments to several Ukrainian laws (concerning the moratorium on the privatization of religious buildings and properties)—concerning the protection of the rights of communities concerning expropriated churches.

№ 5496: On amendments to Ukrainian labor code in regards to holidays and non-working days—adds a celebration of the Nativity of Christ on December 25, together with the Catholics.

№ 6722: On amendments to the regulations of the Verkhovna Rada (regarding the reading of the Lord’s Prayer immediately after the opening of plenary sessions).

Finally, the parliament is also set to consider bill № 6153: On the appeal of the Verkhovna Rada of Ukraine to President P. A. Poroshenko of Ukraine on the conferment upon His Holiness Patriarch Filaret of Kiev and All-Ukraine of the title of Hero of Ukraine.

The “patriarch” Filaret heads the “Kiev Patriarchate” which is self-proclaimed and recognized by no Local Orthodox Churches.

Serbian Patriarch urges Poroshenko to stop the seizure of Orthodox shrines
"Our Christian conscience is deeply concerned with the destruction of the centuries-old unity of the Orthodox Church in Ukraine and with the support of this destruction that threatens the unity of all of ecumenical Orthodoxy, which is preparing the great Pan-Orthodox Council this year," Patriarch Irinej writes.
Comments

F.9/9/2017 11:20 pm
@ Mark
Did your grandpa defect to join the SS or Vlaslov? There is only Holy Imperial Russia, and its western border is the border of Germany.

Mark Sudia 9/9/2017 3:13 pm
The Orthodox faithful in Ukraine should have a church separate from the Russian Orthodox, provided it isn't created for secular political reasons.
×