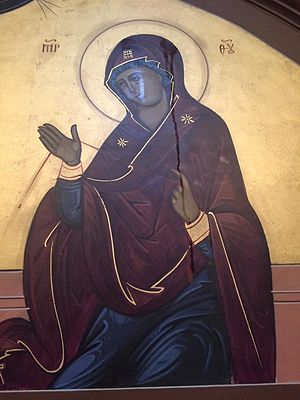 Photo: Facebook
An icon of the Mother of God began streaming myrrh on the eve of the feast of the Universal Exaltation of The Precious and Life-Giving Cross of Our Lord (September 13 on the new calendar) at St. George Orthodox Church (OCA) in Buffalo, NY, according to the parish’s Facebook page.

The message, posted yesterday reads, “By the Grace of God, on The Eve of the Universal Exaltation of The Precious and Life-Giving Cross of Our Lord (Sept 13), The Icon of The Most-Holy Theotokos and Ever-Virgin Mary on our Iconostasis began streaming Oil. She has been streaming Oil ever since and it has increased over the passed [sic] two days.” 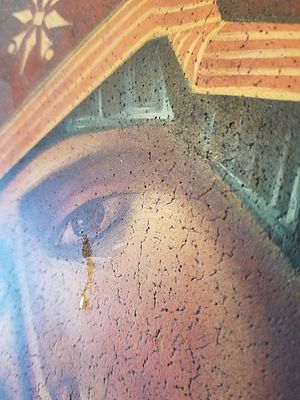 Such miraculous manifestations are a reminder to the faithful that God is always with us, leading the willing towards salvation. The post from St. George Orthodox Church ends with a prayer:

“Through the prayers of the Most-Holy Theotokos and Ever-Virgin Mary, May God continue to bless, guide, and lead us all on doing His Will in fulfilling the Gospel of His Beloved Son Our Lord Jesus Christ!

St. Anne Orthodox Church (OCA) in Albany, Oregon also reports on their Facebook page that an icon of the Theotokos began weeping during Holy Communion on August 15, the feast of the Dormition of the Mother of God. The tear remained on the icon as of the next day. Icon of St. Panteleimon shedding tears in Greece
The tears appeared on the icon at 3:30 PM on July 27, on the eve of the new calendar celebration of the great martyr and healer. Three icons begun to stream myrrh in monastery near Astrakhan
A strong, sweet fragrance spreads throughout the whole church. Monk Mitrophan, inclining towards the icons, inhales the gentle aroma and expounds—the Life-giving Cross has a woody scent, reminiscent of sandalwood. From the icon of the Royal Martyrs a pure, clean fragrance—after all it is a genuine family of five children and their parents.

Panayiotis,
I am so sorry you've decided to take two steps back in your faith. I seriously pray you'll reconsider and return back to the only path of salvation - Orthodoxy. You must understand that one, as an Orthodox, relies only on faith and not scientific interpretation. Panayia is only second to Christ and always will be. She was chosen to give birth to Him. Please return to the true Orthodox faith to understand. I pray that you do.

Editor10/3/2017 11:31 am
Pannayiotis: The Orthodox do not ascribe things to Mary the Mother of God that the Church has not through the ages confirmed. They are not like the Catholics with their erroneous teachings about Mary. But there have been miraculous icons also throughout the ages in Orthodoxy, of the Mother of God, but also of the Christ and the saints. No need to worry about this.

Panayiotis (Peter)10/3/2017 4:46 am
I am a Greek Orthodox Christian by tradition and now evangelist by faith. As I look back upon the issue of Mary, the mother of Jesus Christ, it is clear to me that her status in the Church has been elevated to a degree that would grieve our Heavenly Father. As many Orthodox Christians look to these Icon miracles as heavenly, I remain suspect. Since there is no way to test the spirit of an Icon, I would not put too much credence into its claim. Remember, every spirit that acknowledges Jesus Christ has come into the flesh is from God. Mary did not come from heaven.

Gregory9/24/2017 12:01 am
Louis, not knowing anything about your beliefs, it's difficult to know what would or wouldn't convince you, but I've personally witnessed icons myrrh before my own eyes, and have seen the same thing happen multiple times (the congregation stopped commenting on it, it became so common) during the services performed by a certain Priest who used to serve in our area. My family spent hours with the Hawaiian Iveron Icon, watching it produce so much myrrh that vial after vial was filled, even the glass and the wood of its case beaded up and streamed myrrh as long as anyone was there to wipe it off. It's been X-Ray'd 100's of times, there no gimmick. Prayerfully go see for yourself, if you can. +++

Louis kelemen9/23/2017 4:18 pm
Is this for real? I know of someone whom I respect who truly believe that tears from these icon are real. Please convince me that this true. Every bone in my body says that this is a lie. Please convince my otherwise.
×