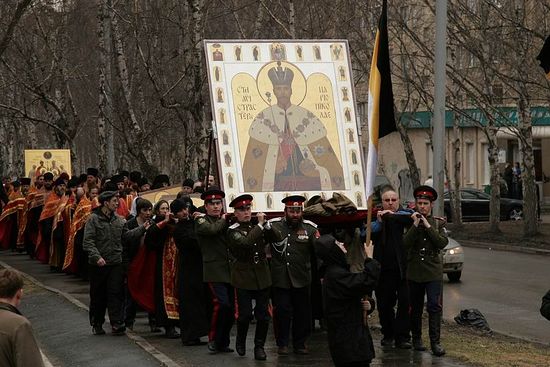 Cossacks from Russia have delivered the myrrh-streaming “Nadym” Icon of Tsar-Martyr Nicholas II to Serbia for the veneration of the faithful, reports RIA-Novosti with reference to Serbian media.

The image was first exhibited in the Church of St. Sava in Belgrade, together with icons of the tsarevich St. Alexei, St. Sergius of Radonezh, and St. Seraphim of Sarov.

A cross procession in eastern Serbian began on Sunday following the Divine Liturgy, in which the icon of the last Russian emperor will be carried throughout various cities and villages of the country, with the participation of representatives of the Russian Cossacks. 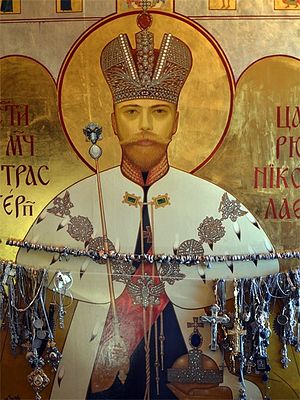 Photo: klin-demianovo.ru
According to information in Serbian media, the Nadym icon of Tsar Nicholas II streamed myrrh this year in Donetsk on the July 17 feast of the Holy Royal Martyrs.

The icon of Tsar-Martyr Nicholas II was painted by order of the ataman of the Nadym district of the Siberian Cossack troops, the Cossack Colonel Sergei Crystal in 2003, in the Trinity-St. Sergius Lavra, to be carried in the cross procession from the Russian Golgotha to the Golgotha of the Lord in Jerusalem. It measures 5.75 ft. x 6.9 ft. The icon was blessed on the feast of the Romanovs that year, on the 85th anniversary of their martyrdom, and began streaming myrrh from the moment of its consecration. The image is decorated with numerous gifts, including a pectoral cross and an episcopal Panagia. To date, the icon has already visited many cities of Russia and abroad. Orthodox unity project to open monument to Tsar-Martyr Nicholas in Republika Srpska
On September 30, 2017, in the city of Doboj, Republika Srpska, Bosnia and Herzegovina, an opening ceremony and consecration of a new monument to Tsar-Martyr Nicholas will be held, organized by the Society of Russian-Serbian Friendship and Unity of Orthodox Peoples, with the support of the Russian embassy in Bosnia and Herzegovina.