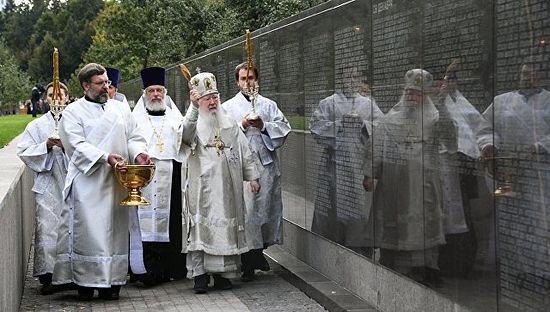 A new memorial, “Garden of Memory,” has been opened at the former Butovo firing range, bearing the name of all those shot on that spot in the years of Stalinist repressions, reported the rector of the Church of the Holy New Martyrs and Confessors of Russia in Butovo Archpriest Kirill Kaleda to RIA-Novosti.

The monument consists of two granite slabs on which are engraved the names of 20,762 people who died at Butovo. The monument measures 984 ft. long, and 6.5 ft. tall.

The opening was celebrated by the oldest hierarch of the Russian Church Metropolitan Juvenaly of Krutitska and Kolomna, and was attended by Federation Council member Vladimir Lukin, member of the Human Rights Council of the Russian Federation Sergei Karaganov, Natalia Solzhenitsyn, the widow of the famous author, as well as representatives of various EU nation embassies. 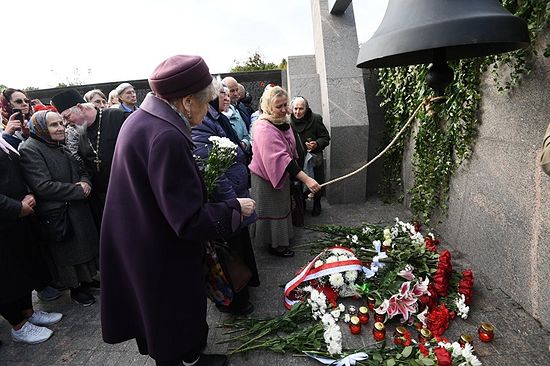 Butovo was the largest site of mass executions and burials of victims of political repression of the mid-20th century. In the period from August 1937 to October 1938 alone, more than 20,000 people were shot and buried there. About 1,000 of them were specifically martyred for confessing the Orthodox faith, and more than 300 have been canonized.

Today the Church of the New Martyrs and Confessors stands on the spot of the former firing range, and His Holiness Pat. Kirill celebrates the Divine Liturgy annually in Butovo on the fourth Saturday of Pascha in honor of the New Martyrs of Butovo. 100 years of October Revolution: relics of New Martyrs to be carried throughout Russia
2017 marks two major anniversaries in Russia: one hundred years since the restoration of the patriarchate, and one hundred years since the disastrous October Revolution. The second is to be marked by the Russian Orthodox Church by celebrating all those who died for their faith in the years of Soviet atheism brought on by the revolution. The Holy New Martyrs and Confessors of Russia
Archbishop Mark of Berlin
Martyrdom is the same thing as Christianity. These two words have the same meaning. Hatred against Christ and His followers should not surprise us. It is natural, it was foretold by the Lord Himself, Who said: “If the world hate you, ye know that it hated me before it hated you” (John 15:18). What sort of disciples would we then be, if we did not follow the footsteps of our Teacher?
Comments