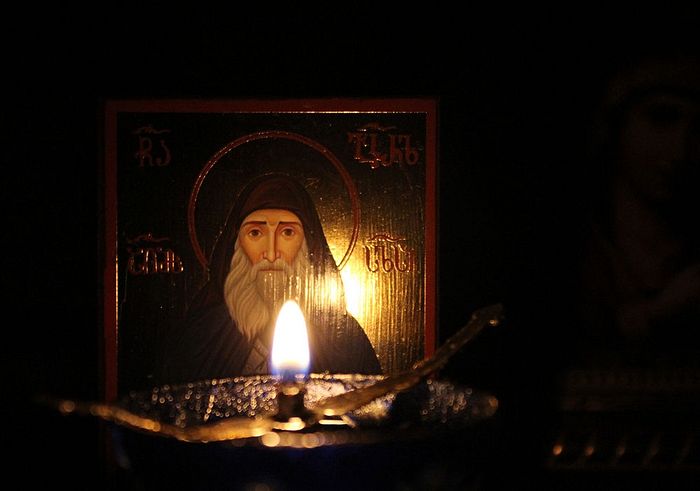 In the summer of 2015, Pravoslavie.ru reported that two personal items of St. Gabriel (Urgebadze) had been placed in the church on Bolshaya Gruzinskaya Street for veneration—his mantia and his cap. Having read about it, I, like many, “burst” through the “barricade” and crossed the threshold of the Georgian church in Moscow for the first time.

St. Gabriel is a very warm and very simple saint. Somehow the necessary words formed themselves in my head—words from the heart. Comforted and inspired, I decided I need to come here more often.

But… the ever-present “but.” I only crossed the threshold of the Georgian church the second time half a year later. I suddenly decided to go, and went. Why—I still don’t know.

It turns out, that this day, January 27, was the feast of the holy Equal-to-the-Apostles Nina, the enlightener of Georgia. Liturgy had already finished and there were very few people in the church, but I heard prayers in the Georgian language loud and clear. Enchanted by this wondrous sound at first, I froze, then enchanted by what I saw.

At the icon of St. Nina, a Georgian grandmother was reading the akathist to St. Nina in Georgian, her children and grandchildren formed in a line. Not understanding a single word, I just admired silently.

The Georgian grandmother, raising her hands to the icon, at first addressed the saint directly, then, alternately pointed to the line of children and grandchildren that had formed before the icon. No translation was necessary. The Georgian grandmother’s eloquently jerky motions were obvious: “This is flesh of my flesh and blood of my blood; save and protect them, St. Nina!” 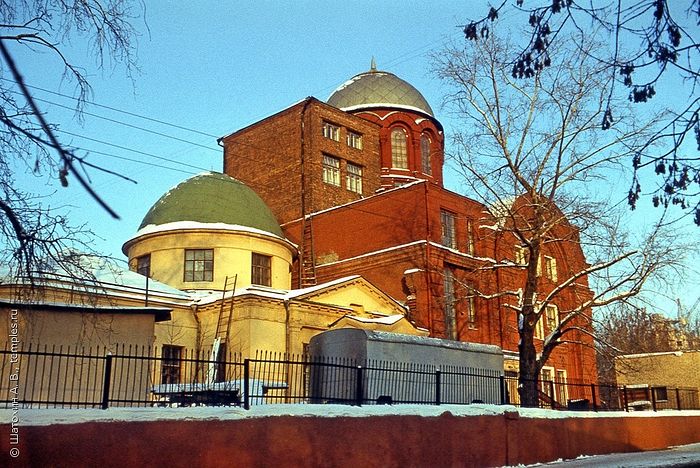 The Church of the Great Martyr George the Victorious in Moscow

“I would love to have such a Georgian grandmother!”—the crazy thought flashed into my head.

The other thing that drew me to the Georgian Church was the icon of the Great Martyr Marina. There are so many Marinas in Moscow, and so few churches with the icon of our saint.

Having decided that I absolutely had to find a good reason to come here again, I asked whether the church had molebens to St. Gabriel. “Every Tuesday at 6:00 if it’s not the eve of a great feast,” came the answer.

The next Tuesday was February 2. Moscow was getting pummeled with snow. A wall. The snow was dancing up, down, and diagonal in gusts of wind. I doubted whether it was worth it to go. “After all, there will be other Tuesdays,” I told myself, looking at a photo of St. Gabriel they had given me at the Georgian church last time. The snowfall wasn’t stopping. “And so many icons of St. Gabriel are streaming myrrh in Georgia right now…” I said, continuing my inner monologue. I got ready and left—from Yasenovo to Bolshaya Gruzinskaya1 through the never-ending snow.

The snow led to traffic in Moscow, and traffic to lateness.

The moleben had already started. There were few people. On a small table before the icon of St. Gabriel there was a large basket with lovely fruit and a large tray of candy. “Strange,” I thought. “Fruit—it’s not the Transfiguration. Candy—it’s not a table for the dead. So why?” 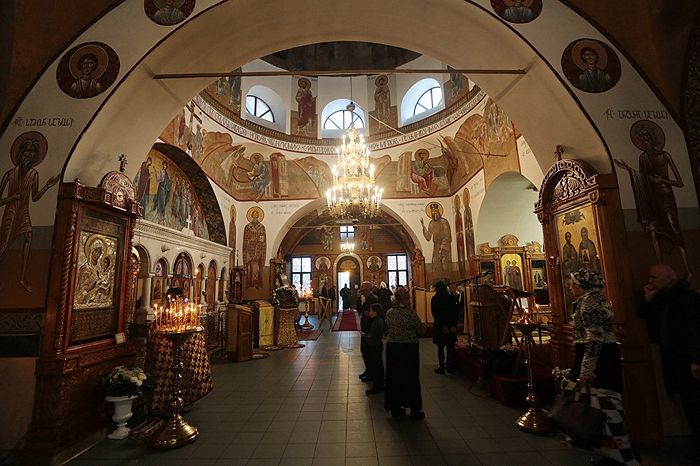 The Church of the Great Martyr George the Victorious in Moscow

Then I stopped thinking. At all. Have you ever heard how Georgian singers chant in church? It’s classical Church singing, but only Georgians sing it! I even closed my eyes, to understand what I was feeling in my heart at that moment. Love and light! And also—mountains! And the high, boundless heavens! And smiles! And kind, attentive eyes! When everyone rejoices in one another! When everyone loves and respects one another!

At some point, the whole church started singing together with the choir, in Georgian. Surrounded by singing Georgians, only I was silent. Did I feel like a foreigner at this Georgian Church service? No! Sure, I didn’t understand a word, but I understood everything! With my soul, with my heart, with my general knowledge of Church Tradition! These were my brothers and sisters! And I was one of them! Pompous? No! What in our day can unify the people of such a large and single country? Only love for God! Jesus Christ! The Mother of God! I have never been to Georgia, but now I know its soul!

The purpose of the fruit basket and tray of candy became clear at the very end of the moleben. Afterwards, as everyone was venerating the icon of St. Gabriel at the end of the moleben and the priest was anointing them with oil, they were giving everyone some fruit from the basket and candy from the tray. From St. Gabriel! Georgians can’t send you away without having treated you to something!

My inner restless monologue appeared again: “Can I ask them to give me, one person, three pieces of candy—for me, for mama, and for the priest I always confess to? But without looking like one of the shameless Muscovites who just quickly pop into churches?”

And I really wanted to learn the meaning of a certain Georgian phrase I heard a lot during the moleben. “’Mama Gabriel’”—does that mean ‘Fr. Gabriel?’” I asked, having mustered up courage. They answered affirmatively, and my heart completely melted.

When I left, the quieting Moscow snowfall had already managed to turn into ankle-deep Moscow slush. But it wasn’t important anymore. I had two pieces of candy in my pocket from St. Gabriel, for my mama and the priest I always confess to. I had already eaten my piece of candy there, under the Georgian sun, in a Moscow church on Bolshaya Gruzinskaya.

1 Bolshaya Gruzinskaya Street is in the center of the city, while Yasenovo is much farther to the south of the city.
See also