“Revolution”, and Other Word Traps 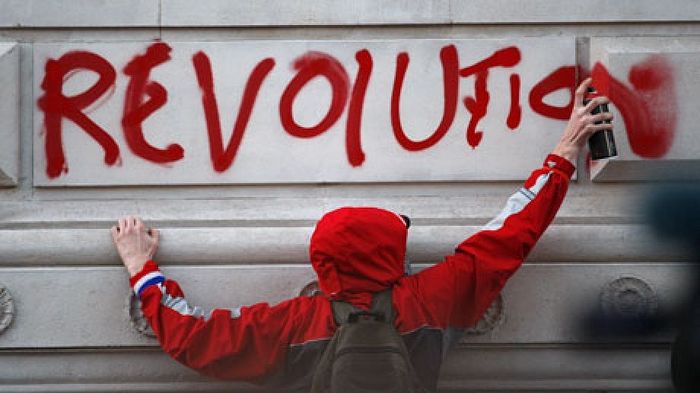 This was a story told to me by an artist and iconographer, Elena Ivanovna. In her youth she was interested in Freud and lived in bohemian circles, where they smoked weed, guzzled vodka, and believed that only “free love”—otherwise known as fornication—can unleash an artist’s creative “me”, not allowing him to get bogged down by prejudices.

“In my youth I believed in Freud like God, but Freud would quake with hatred at the mere mention of the word “Christ,” Elena told me. “And liberation according to Freud led me to such disgust with all these perversions that I decided to kill myself. I obtained some poison and wanted to drink it, when suddenly the earth opened under my feet. The Lord showed me, still unbelieving and unbaptized, first Paradise and then hell. I literally shook with horror when I saw the place where suicides end up. But if hell can be at least approximately described, then paradise in indescribable. I am an artist and I understand colors, but such colors as I saw there, believe me, do not exist on earth.”

After this event, Elena was baptized. But before baptism she put together a dictionary of those poisonous word traps that defiled her youth and nearly brought her to suicide. Freud’s love is sex and partnership, but for all that, fornication is love. Chastity is a perversion of the personality who has complexes, and has hidden his lust in his subconscious mind. And perversion is a release into the kingdom of freedom.

The dictionary was long. Much has been forgotten with the passing of years. But just recently I thought, how good it would be if some reader of our site would compile a dictionary of modern word traps, which abound in our days. I personally am ready to make my own contribution, by telling the history of the word “revolution”, and here is why. In one of my stories published on the site Pravoslavie.ru was written, “After all, if the word “evolution” means “development”, then “revolution” is, to the contrary, “reverse movement”. And just a few days ago a teacher with many years of experience called me and, sincerely wanting to help, pointed out a mistake:

“Read dictionaries!” she exhorted me. “In all our dictionaries, revolution means a qualitative leap and renewal of life, when more progressive social order replaces old worn-out forms.”

I would also exhort my countrymen to read dictionaries, but not only the soviet ones or those close to them in spirit. There is also the dictionary of Shakespeare. There is, finally, that mystery of words, which helps us understand why “orange” and other “color” revolutions have ended not with the promised improvements in life, but with something entirely the opposite. It is almost like that scene in Shakespeare, where Hamlet is contemplating the skull of Yorick—it talks about the essence of revolution. You can learn all about this in the articles taken from the historical scholarship blog, Averrones [in Russian]. Unfortunately, regardless of its scholarly conscientiousness, the blog is little known; but it is dedicated to all those who worry about the spiritual shipwreck of our culture and hope for its renaissance.

A revolt of meaning: the the word “revolution”
Source: Averrones

“Long live the revolution!” thus was the exclamation of the English royalists, who had waited so long, and finally saw, the fall of Cromwell and the coronation of Charles II. No, there is no sarcasm here; it’s all perfectly serious. It’s just that with the passing of time, not a few words have changed in meaning to become their diametric opposite. Hand in hand with the corruption of the original meaning of the word “absolutism”, goes the corruption in the meaning of the word, “revolution”.

The word “revolution” first appeared in the Latin language in the fourth to fifth centuries, formed from the verb, “revolvere”, meaning, “return”, or “roll back”. In the Middle Ages the term “revolution” began to be used by European astronomers to mean the cyclical turning of planets and stars. It is in this sense that this term was used in the famous work by Nicholas Copernicus, De revolutionibus orbium coelestium (On the revolution of heavenly spheres), published in Nuremburg in 1543. From the fifteenth century on it was applied to indicate a return orbit of political forms, also. Thus, in Florence the term “rivoluzioni” was applied to the revolts of 1494, 1512, and 1527, because in destroying the existing political orders, the ones that had been before them were restored. In France the word “revolution” was what they called the return of King Henry IV to Catholicism on July 25, 1593.

In the “Dictionary of the French and English Languages” compiled by Randle Cotgrave and published in London in 1611, the word “revolution” was explained as “a full compassing, rounding, turning backe to it first place, or point; the accomplishment of a circular course.” In the “Explanation of Difficult English Words”, which was published in its eighth edition in London in 1647, the term “revolution” was interpreted as “a winding, or turning about, especially in the course of time.” In the play by William Shakespeare, “Hamlet”, the word “revolution” was used to mean “turning into”: in the Act Five, Scene One, Prince Hamlet says as he contemplates the skull, “Here’s fine revolution, an we had the trick to see’t.”

From the position of this understanding the term “revolution”, a true revolutionary movement was not the liquidation of the royalty in England in early 1649, but its restoration in 1660. Thomas Hobbes in his work, Leviathian, dedicated to the Long Parliament, called the “circular movement of sovereign reign through two usurpers, a father and son, from the last king to his son” a revolution. Furthermore the philosopher explained that the given government “turned from King Charles I to the Long Parliament; from it to the Rump; from the Rump to Oliver Cromwell; and then in the reverse direction—from Richard Cromwell to the Rump; from it to the Long Parliament; and from there to King Charles II, where it can stay for long.”1

Edward Hyde, 1st Earl of Clarendon, in his memoirs represented the catastrophic events taking place in England from 1640 to 1660 as “revolt and civil war”, and he used the word “revolution” to describe the restoration of the monarchy of the Stuarts. In describing the triumphant return of Charles II from Paris through Den Hague to London he noted that judging from how His Highness was received, one could think that “this revolution was summoned by the unification and activity of the whole Christian world.”2

“Revolution” was what John Price called the restoration in England in 1660 of royal reign. A brochure of his memoirs about this event was published in London in 1680. “The secret and method of a fortunate restoration of His Highness are open to society’s view”—that was its title, after which the name of the author was given—John Price; and it is noted that he was “one of the last chaplains of Earl of Albemarle, initiated into all the secret pages and details of this glorious revolution.”

1 Translated from given Russian text.

2 Translated from given Russian text. How American Anarchy Parallels China’s Cultural Revolution
Helen Raleigh
Both movements started on college campuses, with students who wanted to re-make history according to their own ideology. Bastille Day Is Nothing to Celebrate
Steve Byas

Bastille Day Is Nothing to Celebrate
Steve Byas
To understand why such men of the Left so admired the French Revolution, with its savage attacks upon Christianity, liberty, property, and life itself — symbolized by the guillotine for “enemies of the people" — we need only note how and why it came about. This will also reveal why the popular image described above of the storming of the Bastille is a gross fabrication of actual historical events.

Revolutions and diabolism
Vladimir Neviarovich
According to St. Seraphim of Sarov, devil was the first revolutionary, who rebelled against God. That is why all revolutions are adverse to Christianity and have a diabolic origin. An accurate and unbiased analysis of Russian revolutions in the 20th century shows they were no exception of this rule being apparently of diabolic nature.
Comments

My name is Anuj Agarwal. I'm Founder of Feedspot.

I would like to personally congratulate you as your blog OrthoChristian.Com has been selected by our panelist as one of the Top 60 Orthodox Blogs on the web.

I personally give you a high-five and want to thank you for your contribution to this world. This is the most comprehensive list of Top 60 Orthodox Blogs on the internet and I’m honored to have you as part of this!

Also, you have the honor of displaying the badge on your blog.

"In all our dictionaries revolution means a qualitative leap and renewal of life, when more progressive social order replaces old worn-out forms.” This way of thinking is somehow similiar to Satan's lie about the forbidden fruit. The rebellion against order is supposed to look like something that is good, desirable and necessary for people's development. In the end, it kills their mind, body and soul.
×