Pat. Ilia II will not visit Russia for centenary of restored patriarchate due to health 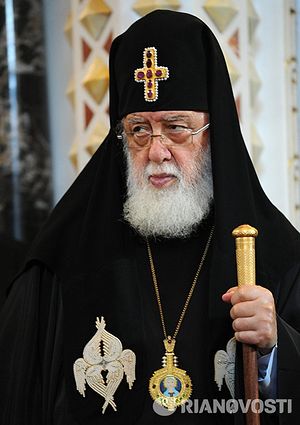 His Holiness Patriarch-Catholicos Ilia II will not be able to visit Moscow on December 4 for the celebration of the centenary of the 1917 enthronement of St. Tikhon (Bellavin) as the first head of the renewed patriarchate as he had hoped. It was announced today that he would not be able to travel due to health problems and the increasingly cold weather, RIA-Novosti reports.

A special invitation was extended to Pat. Ilia by Metropolitan Hilarion (Alfeyev) on behalf of His Holiness Patriarch Kirill in early November, when he was in Georgia for a working visit.

“I want to welcome you on behalf of the Russian patriarch Kirill. He said he is waiting for you in Russia, with great love in honor of the celebration of the centenary of the restoration of the dignity of the Russian Patriarchate. We hope to see you and the members of your delegation at this event. We have invited the heads of various Orthodox Churches, receiving agreement from the majority of them,” the metropolitan said.

“I accept your invitation. If health permits, I will surely take part in this event,” the Georgian patriarch responded.

However, “The patriarch will not be able to travel to Moscow, given his state of health. His Holiness feels well, but to travel in such cold would, of course, be difficult for him,” a patriarchate representative stated today.

Pat. Ilia has had several health problems lately. In January he was recovering from a flu brought on by a gall bladder inflammation, and in February he traveled to Germany for treatment when laboratory examinations revealed a fever following a bout with kidney stones. While in Germany he ended up having gallbladder surgery.

Pat. Ilia announced yesterday that should the need arise, Metropolitan Shio (Mudzhiri) of Senaki and Chkhorotsqu would serve as the Locum Tenens of the patriarchal throne of the Georgian Orthodox Church. This announcement was presumably made in view of the 84-year-old patriarchs’ sensitive health.

A delegation of the Georgian Church, including bishops, archbishops, and metropolitans will travel to Moscow for the celebrations, although Met. Shio will not be among them, as the list of delegates was compiled already before the patriarch announced the choice of Met. Shio. Georgian Orthodox Church celebrates 100th anniversary of restoration of autocephaly
The receiving and restoration of the Georgian Orthodox Church’s autocephaly are historical dates higher than mere historical events, according to the patriarch. After the sermon, the Catholicos-Patriarch of all Georgia served a memorial service for Georgian ancestors who served the people, the country and the Church. With Love for Truth
On Patriarch-Catholicos Ilia II and the visit of Pope Francis to Georgia
Jesse Dominick
As a wise and discerning shepherd, Patriarch-Catholicos Ilia II maintained a balance between respect for his guest and respect for his own flock and Church, and his own ordination, with all its ensuing responsibilities, stating: “True faith, humbleness and our traditions—these are the ancient treasures that we preserve and will continue to do so in future. We greet you again and confess that our unity is in the true faith. Only true faith and love will open the path towards our communion.”
Comments
×