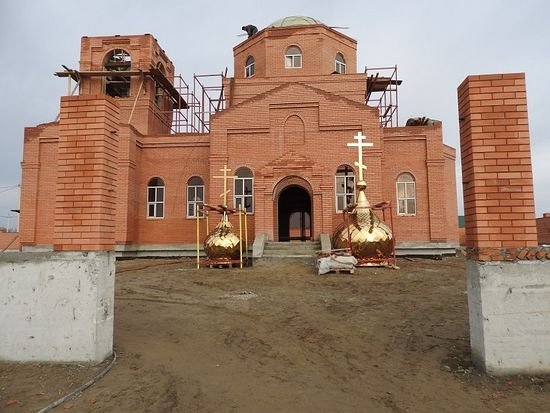 An Orthodox church in the village of Shelkovskaya in the northeastern Chechen region of Shelkovskoy, construction on which began in April, will open for parishioners in the summer of 2018. The interior decorating work in the church will soon begin, assistant to the head of Chechnya Daniel Martinov reported to TASS yesterday.

The church will be the third Orthodox parish in the republic which is 95% Muslim.

“As soon as we close the external circuit and conduct the heat, we’ll begin the interior finishing… There will be 11 bells. We are planning to open the Church of the Great Martyr St. Barbara in the summer,” Martinov stated.

The complex, erected on the site of a ruined church, will include a church, a parish school, a trapeza, and a rectory for the parish priest. The church will also house a shrine with the relics of St. Barbara.

The construction is moving along rapidly, and the progress is being personally supervised by the head of the Chechen Republic Ramzan Kadyrov, Martinov said.

The Church of the Nativity of Christ was opened in the village of Naurskaya in April 2016, on the site of an old wooden church that had been destroyed in 1936. There is also a church dedicated to St. Michael the Archangel in the capital city of Grozny. New Orthodox church opened in Chechnya
The Church of the Nativity of Christ in the village of Naurskaya was built by specialists invited from Yekaterinburg, which is why the temple’s architectural features are atypical for churches of the Northern Caucasus. The church has a polished tile floor made from seven types of granite, the domes are covered with gold leaf, and an automated bell ringing system has been installed which can be operated by SMS. The icons for the iconostasis were painted by sisters of the Novo-Tikhvin Convent in Yekaterinburg, modeled on fifth-century Byzantine icons. The film, 50 Shades of Grey, will not be released in Chechnya and Ingushetia
“This film will not be shown in our cinemas as most of its contents contradicts the mentality and religious beliefs of the majority of the republic's population,” Ayubova said.