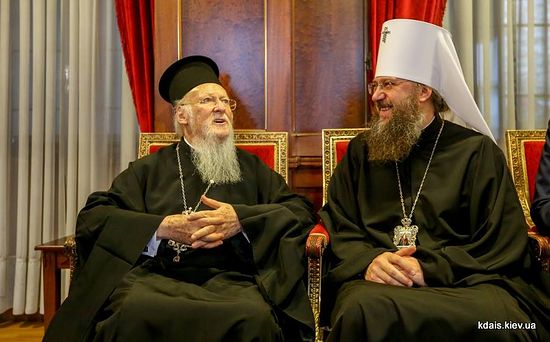 Chancellor of the Ukrainian Orthodox Church Metropolitan Anthony of Boryspil and Brovary visited Constantinople yesterday, where he served Liturgy at the Vatopedi metochion of St. Andrew’s Cathedral, after which he met with His All-Holiness Ecumenical Patriarch Bartholomew, discussing the sorrowful ongoing Church schism in Ukraine.

The meeting at the patriarch’s residence in the Phanar was also attended by Archpriest Nikolai Danilevich, the Deputy Chairman of the Ukrainian Church’s Department for External Church Relations, and Verkhovna Rada Deputy Vadim Novinsky, and Metropolitan Job (Getcha) and Archimandrite Vissarion (Komzias) from the Ecumenical Patriarchate, reports the site of the Ukrainian Orthodox Church.

Met. Anthony conveyed the greetings of His Beatitude Metropolitan Onuphry of Kiev to His All-Holiness to begin the meeting at which they proceeded to discuss the state of interfaith relations in Ukraine and the situation in Ukrainian Orthodoxy. In particular, Met. Anthony confirmed the readiness of the Ukrainian Orthodox Church to do everything possible to overcome the Church split.

Both Met. Anthony and Fr. Nikolai were appointed to the Moscow Patriarchate’s recently-formed committee for dialoguing with the schismatic “Kiev Patriarchate,” which claims it is ready to talk about restoring Eucharistic communion.

All participants are unanimous in their position that any schisms in the Church must be resolved on the basis of Church canons, not political expediency. The schism must be treated and overcome, not legitimized. There is no other way to achieve a real, rather than superficial unity in the Church, according to the participants.

Self-styled “Patriarch” Philaret Denisenko of the “Kiev Patriarchate” has stated that in order to heal the schism, he expects precisely such legitimization—for the excommunication and anathema against him to be lifted, and autocephaly to be granted to his group.

Anthony12/18/2017 7:23 pm
Alloha! Well anyone who's well attuned to the shenanigans of the phanar will know all too well that the man speaks with a forked tongue. A few weeks ago he was examining documents on autocephaly. Now he's chirping on about non politicisation healing of the Church. Next week he'll change his position again.
×