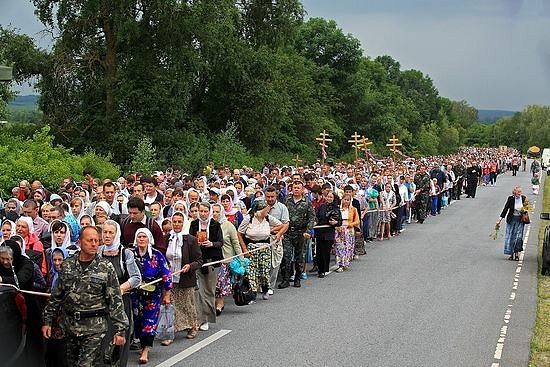 The attempts of the current Ukrainian authorities to create a single Local Ukrainian Orthodox Church do not find support from the overall population which believes that the “rhetoric of hatred” towards the Ukrainian Orthodox Church of the Moscow Patriarchate can become “a factor of destabilization in the social-political situation.” These results from human rights monitoring in Ukraine have been published on the site of the Moscow Patriarchate.

“Monitoring of the observance of constitutional human rights in Ukraine in 2016” was commissioned by an inter-factional deputy alliance of the Ukrainian parliament. According to the results of the opinion poll, 32% of respondents agreed that a single Local Church is not needed because it would limit citizens’ rights to choose their confession. 24% were against this sentiment, while 44% were undecided. The notion that the authorities and politicians should not interfere in Church matters was met with approval by 36% of respondents, and disapproval from 19%, with 46% undecided.

The report also notes a negative trend of government interference in the realm of inter-confessional relations, relations between the state and religious organizations and the guarantee of believers’ rights, stemming from their active attempt to create a single Church (although the Ukrainian constitution proclaims the separation of Church and state).

The seizure of Moscow Patriarchate churches and the beating of believers and clergy is prevalent, especially in Western Ukraine, often with the support of deputies and para-military forces, the report states. “The hate speech widely used in seizing worship sites of the Ukrainian Orthodox Church, bearing a propagandistic character, can become a factor of destabilization in the social-political situation,” the document reads.

Ukrainian president Petro Poroshenko has said that creating a single autocephalous Ukrainian Church would not limit the freedom of believers and would not change the principles of interaction between authorities and religious organizations.

200 new monastics, 3 new monasteries in UOC in 2016
The number of parishes and bishops also grew in the previous year. What’s happening in the Ukraine is a Tragedy for all
Interview with Metropolitan Nikoloz (Pachuashvili) of Akhalkalaki and Kumurdo
Metropolitan Nikoloz (Pachuashvili) of Akhalkalaki and Kumurdo
Can a physicist believe in God, how should a modern cinematographer be, why does the Lord allow wars and persecutions against Christians, and what experience can Georgia share with Russia and the Ukraine are questions discussed in an interview by RIA Novosti Vladimir Putin: “In the Ukraine people are driven away from churches, but human rights activists are silent”

Vladimir Putin: “In the Ukraine people are driven away from churches, but human rights activists are silent”
The Russian Federation’s president noted that in the Ukraine on the “holiday” of the Ukrainian Insurgent Army – “a nationalist and pro-fascist organization” – was officially celebrated, accompanied by calls for violence against the Russian Orthodox Church representatives.
Comments

Roman2/10/2017 12:47 pm
Dear Jane, where do you live? And why are you so hate-filled towards those Ukrainian Orthodox Christians who wish to worship in a Church unaffiliated with Moscow, religiously or politically? Is that a crime? A sin? Why can they not be accorded a right enjoyed by Orthodox Christians in numerous countries throughout the world - an "independent Local" Church in an independent nation-state. Or do you refuse to recognize the independence of Ukraine? And why am I a "hothead" - because I support their right to such a choice? And what does the Union of Berest have to do with all of this? I'm sure that if the UOC-KP would have wanted to go that way it would have done so a long time ago. Ukraine is not Russia and she does not want to be part of her empire again, thank you. So, like Moses said to Pharoah: Let my people go!

Jane2/9/2017 5:33 pm
Roman, wherever you live, you sound to me like a hothead. Your comments don't make sense. If there were to be a referendum among the Orthodox and they chose (mind you, it would have to happen without any political pressure) that everyone be united under the canonical Ukrainian Orthodox Church-Moscow Patriarchate, what would you do? No comment? Would you force them to do it your way? Are you really Orthodox? Because Orthodox people know that a man cannot just declare himself patriarch. This is called schism and self-election. And then start forcing everyone to come under him. That is called criminal. it sound to me like what you want is an "Orthodox" Brest Unia, with all the bloodshed that followed it. I will not be answering any more comments from you because where you are coming from (spiritually speaking) is quite clear to me.

Roman2/9/2017 5:20 pm
Dear Jesse. Where did you study sociology? Those who are "undecided" are neither "for" nor "against". They could be absolutely oblivious to the question. Even the 32% "against" does not mean they are "for" the ROC. They simply are in favor of the "status quo", that is, of a divided Orthodox Church in Ukraine, where they can pick and choose Churches. Is this really what is good for the Orthodox faithful of Ukraine?

Roman2/9/2017 5:13 pm
Dear Jane, I hate to disappoint you, but I happen to live in the southern regions of Ukraine (IT'S A COUNTRY, DEAR! Without the "THE". Even Manitoba or Saskatchewan are without "the". To say nothing of Canada!).I think the people of Ukraine know what's best for them, not Russia, not the Russian people, not the Russian Orthodox Church. Survey after survey among believers has shown that most Orthodox believers in Ukraine are in favor of a solution for Ukraine's divided Church, and it is not the Russian Orthodox Church. By the way, is everyone who stands up for th4 rights of his country and his people a "hothead" in your book?

Jane2/9/2017 1:53 pm
Roman, where do you live? I highly suspect, not in the Ukraine. Probably in Canada. Russia is much closer to the Ukraine than Canada, and much to your chagrin, knows much better what people are thinking in the Ukraine. If you ask the whole population you will get answers from many people who are not even Orthodox. Sectarianism is also rampant there. Even in the government they have a real mixed bag: Scientologist, Baptists, Jews, Muslims... The people who matter in this question are Orthodox believers, real ones, in the Ukraine, and not hotheads in Canada. Forgive me.

Jesse2/9/2017 1:49 pm
Roman, only 24% responded in favor. Those undecided are not in favor. It's a fairly small minority in favor, according to this poll.

Roman2/9/2017 12:43 pm
With 68% of the population surveyed expressing either a favorable or undecided view of a Local Church, and 32% saying they do not want a Local Church because it would limit their choice of which Orthodox Church they wish to belong to, how can you possibly come to the conclusion that "the attempts of the current Ukrainian authorities to create a single Local Ukrainian Orthodox Church do not find support from the overall population". It would be interesting to know how the question was originally worded as this would have truly shown what the people really think.

Roman2/9/2017 12:28 pm
Dear T.D. Why did the Church allow a "Russian" or a "Greek", "Bulgarian", "Romanian" or "Serbian" Church? Face it: Just as the Roman and Byzantine Empires are part of history, never to return, so also is your "Russian" (actually, Muscovite)Empire a thing of the past. Ukraine, a nation of 50,000,000 people, 2/3 of which claim to be Orthodox, has as much right to its own "Local" or "Autocephalous" Church as any other Orthodox nation. Do you also deny the right to a "Local" or "Autocephalous" Church to the Georgia people, who were forcibly part of the Russian Empire?

T.D.2/8/2017 3:58 pm
To the editors:
Why did the Church allow a "Ukrainian Church" in the first place; isn't this amounting to recognizing the dismemberment of the Holy Russian Empire as legitimate? I would not think that the Church would accept a "Turkish Church" or a "Kosovoan Church"! I was told by a priest that the ROCOR never recognized the Bolsheviks as the legitimate rulers of Russia. Why then would their deeds be considered legitiamte (the surrender of Holy Russian land in the west at the Brest-Litovsk treaty by Lenin)?
×