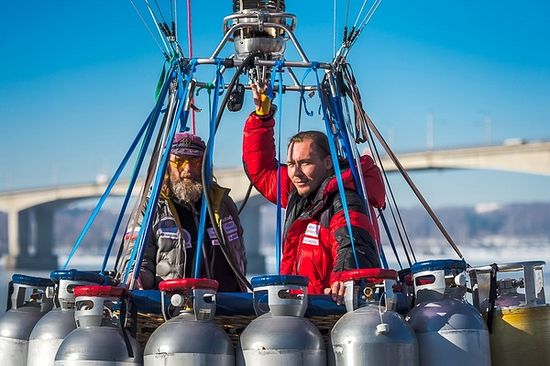 Matushka Irina Konyukhova, the wife of the famous priest and world traveler Fr. Feodor Konyukhov, recently spoke in an interview with the Orthodox newspaper “Krestovsky Most” about a miracle that occurred during one of her husband’s hot air balloon trips that led to the conversion of a fellow traveler.

According to Mat. Irina, several miracles occurred during Fr. Feodor’s last trip around the world in a hot air balloon. His Australian friends were so impressed with what they saw that one of them decided to be baptized as an Orthodox Christian.

“When he was already preparing to land, clouds began to gather in the sky and lightning was flashing,” Mat. Irina relates. “The balloon could have caught fire at any time. It was risky to change course in a strong wind, so he decided to fly straight ahead. Suddenly the clouds parted and he flew between them, after which they came back together again. When he approached the landing spot, his gondola made a cross in the sky. Everyone saw it. His friend, the Australian traveler Dick Smith, exclaimed, ‘Wow! What these Orthodox can do!’” she continued.

“After that, Dick decided to be baptized,” Mat. Irina told the newspaper.

Fr. Feodor Konyukhov is one of the most famous Russian travelers. He gained world popularity after rowing across the Atlantic Ocean by himself and a circling the globe in a hot air balloon. Russian set to beat round-the-world solo balloon record
A Russian adventurer is expected to land in south-western Australia on Saturday, setting a new record for flying solo in a balloon around the world. David Weiss12/28/2017 12:55 pm
здравствуйте,
Please can you tell if this 'friend, the Australian traveler Dick Smith' is the same Dick Smith as
https://en.wikipedia.org/wiki/Dick_Smith_(entrepreneur)
The latter Dick Smith is very famous here in Australia, and is also a traveller/adventurer
however he dosen't look like the man in your article's photo.
It would be very interesting indeed if the entrepreneur Dick Smith was baptised into
Russian Orthodoxy.
thank you
--
David