Who Are the Holy Forefathers, and Why do We Commemorate Them Before the Nativity of Christ? 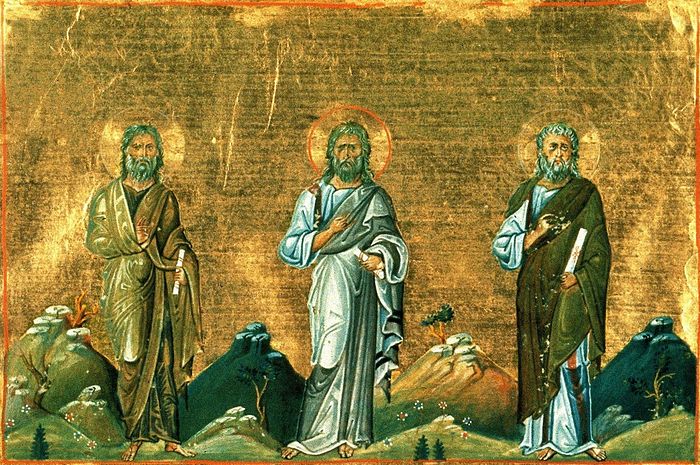 The two last Sundays before the Nativity of Christ are called the Sunday of the Holy Forefathers and the Sunday of the Holy Fathers. The Holy Forefathers and Fathers are the Old Testament relatives according to the flesh of our Lord Jesus Christ, beginning with the holy ancestors Adam and Eve, Abel, Seth, Enoch, Noah, and his sons, the holy patriarch Abraham, and so on up to the glorious Nativity of Christ.

We honor all the righteous of the Old Testament, including those who became the Savior’s ancestors according to the flesh, because these people burned like candles of God in the darkness of paganism, and lived in the hope of the coming of the Messiah and mankind’s deliverance from slavery to the devil, sin, and death. They lived by this hope, lead by it as by a certain inner ray of the heart, which cut through the darkness of pagan religion and gave them the anticipation, the prescience of Christ, the joy of communion with God, the Kingdom of Heaven, and the foretaste of paradise, where human feet had not stepped for many thousands of years but where (O, they believed in this!) the gates would unfailingly open; because into the world would come the One Whom these forefathers and fathers loved above all else, loved more than life itself, and for Whose sake were ready for anything—even death. Into the world would come our Lord Jesus Christ, Who would save them. And he will save all of us!

It is precisely for this reason that on the final Sunday before the Nativity of Christ, on the Sunday of the Holy Fathers, at the Liturgy is read the first synoptic Gospel, the first in order according to the Gospel of Matthew, where the genealogy of the Lord God, our Savior Jesus Christ is recounted. On the one hand, this was established by the Church in order that we would know and be interested in the lives of these Old Testament righteous ones, finding much that is fascinating and, especially, instructive in them. On the other hand, this established order is testimony to the fact that Christ is a real, historical person—and not just an historical person, but God incarnate in human nature, become a real Man, Who took on our sins, healed us with His redeeming podvig, and Who ascended with human nature to the right hand of God the Father. Every man has ancestors and the Savior also had them, which is what the Gospel retells with utmost clarity.

Furthermore, brothers and sisters, we would like to direct your attention to the podvig of the holy forefathers and fathers from the historical point of view. We live in a society that is penetrated and drenched with Christian morality, as the earth is penetrated with air and drenched with water. But at that time, among the ancient Greeks flourished homosexuality, the Canaanite peoples made sacrifices of their own nursling children to Moloch, the Scythians drank the blood of their enemies, and among many nations drunkenness and fornication were glorified by their pagan religions and exalted to the level of religious ritual.

Cruelty and slavery were the norm then. Human life was cheap. Anyone could break into another man’s house during war and take him into slavery, to make of him a “talking thing” with absolutely no rights.

And it seems to me that in those times it must have been very easy to lose the guiding star of the true faith, but the holy forefathers and father did not lose it; to the contrary they preserved it as a flaming, fiery tradition, like a burning candle, which we also must pass on (still burning!) to our own descendants. The world is still standing because of this.

There is a reason why this year at the Liturgy on the Sunday of the Holy Forefathers the Gospel parable of the wedding feast of the king’s son is read (Lk. 14:16-24). The powerful of that world rejected Christ, but the lame on the wayside accepted Him and were triumphantly led to the wedding feast. Who are “the maimed, the halt, and the blind” in the Gospel, who were called to the feast of faith? Of course they are, first of all, the holy forefathers and fathers, and after them all Christians who sincerely consider themselves spiritually sick—sick with sin, and therefore do they weep and lament over their sins and seek their most important Doctor, God. They seek and find Him.

The central liturgical theme on the Sundays of the Holy Forefathers and Fathers is the theme of the three holy friends of Prophet Daniel, Sts. Ananias, Azarius, and Misael, whom the king had thrown into the Babylonian furnace because they did not bow down to the pagan idol. The holy youths did not burn, as an angel protected them. Their being “in a fiery furnace” became a prefiguring of the Nativity of Christ: Just as the three youths were not harmed by the flames of the furnace, so also Christ’s Nativity did not scorch (did not harm) the “Virgin Womb”.

At the threshold of the Nativity of Christ, we would like to wish that all of us, dear brothers and sisters, would have within ourselves, veritably like a heavenly fire, that feeling of the living God, Who appears One and the Same for them, the holy forefathers and fathers, and for the holy apostles, and for us.

In fact, just as the Most High conversed with the holy foreparents Adam and Eve in paradise and abode with them, so does He converse with our souls; although because of our sinfulness we cannot perceive this in full measure as did the first people in paradise. But this happens, nevertheless.

And perhaps one of the most important feelings or thoughts that unites the holy forefathers, the fathers, the apostles, and in general all the saints of all generations is the understanding that the Lord, just as before so also now, like a thousand years ago, and in the coming year, is amidst us, and walks beside us through life. This feeling of the living God is what makes us Orthodox Christians.

Holy Forefathers and Fathers, pray to God for us!

May the Lord be with you always in the new year! 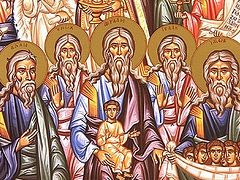 Preparing to Appear with Christ in Glory: Homily for the Sunday of the Holy Forefathers in the Orthodox Church
Fr. Philip LeMasters

Preparing to Appear with Christ in Glory: Homily for the Sunday of the Holy Forefathers in the Orthodox Church
Fr. Philip LeMasters
"Christmas will be here soon, and how we respond to the Lord as His birth will make clear the state of our souls. Will we be ready to welcome Christ into our lives at His birth? Will we be ready to accept the invitation to the feast? I certainly hope so, for the good news of Christmas is that in our Lord the fulfillment of all God’s promises is extended to people like us, those poor, blind, and lame with sin, who suffer from the pain, weakness, and corruption of life in the world as we know it, and who are nowhere near perfect." 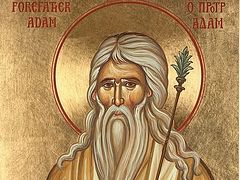 The Table is Laden
Jesse Dominick

The Table is Laden: A Homily on the Sunday of the Holy Forefathers
Jesse Dominick
"The table is laden. All passions, all wealth, all pleasure, all of our excuses, find their true fulfillment in the Incarnate Christ. Let us lay aside all these excuses and accept the festal invitation, for truly, the table is laden, and all are invited." 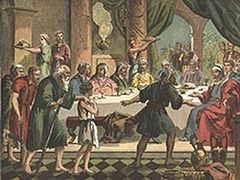 The Sunday of the Holy Forefathers Parable of the Great Supper
Fr. Seraphim Holland

The Sunday of the Holy Forefathers Parable of the Great Supper
Fr. Seraphim Holland
We cannot but scratch the surface of what this parable means in the Christian life, but it is here primarily because one cannot celebrate a feast without being morally prepared. This parable tells us sins to avoid, attitudes to avoid. It tells us to wake up! It tells us to be ready. We commemorate the Holy Forefathers today, because they indeed were part of the preparation for Christ. Without them, there would have been no God-man, Jesus Christ, because He was born of a woman, who was of their lineage, and, if this is not exactly so in a physical sense[2], their prophesies and piety prepared the way for the coming of Christ. That was part of God’s plan.
Comments

George Williams12/13/2020 1:37 am
What Fr. Hopko was saying is that God was born from a lineage of people who were the same as all mankind. Sinners, some good, some bad, but they were not all pure individuals. Only Christ Himself was pure and without sin. The Theotokos was raised in the Temple and she was a very godly girl & woman, but her lineage was checkered. The wisdom of God was to come to save ALL men, even the worst sinners!

Anthony 12/25/2017 12:41 pm
Hello. Good morning. I listened to some podcasts from Fr Thomas Hopko about the old testament and its scandals. He points out that our forefathers were all sinners. What set them apart from the rest of sinful mankind was that they had right faith. They believed in God inasmuch as He had chosen to reveal Himself to mankind at that time - even though they were sinners they had right faith, right belief and this set them apart from the others. Let this lesson resonate LOUD AND CLEAR with anyone who considers ecumenism, the mixing of gold and trash as a good thing. It is grievous; right faith remains in Orthodoxy. http://www.ancientfaith.com/podcasts/hopko/scandal_and_the_old_testament_part_1
×