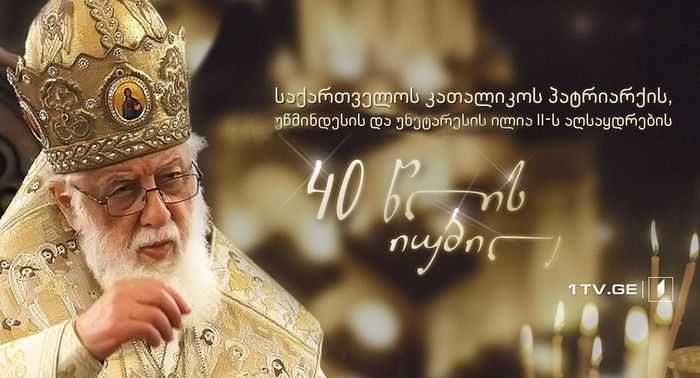 A festive Divine Liturgy dedicated to the 40th anniversary of the enthronement of His Holiness Ilia II as Catholicos-Patriarch of Georgia was celebrated today in the Svetitskhoveli Cathedral in Mtskheta, reports RIA-Novosti.

It would have been impossible to pass these years without the love of the people, His Holiness said during the ceremony, thanking the people for their prayers.

“I am very grateful to everyone. I want to say that these were the hardest 40 years, but we passed them thanks to God, and His blessing and help. I would not have been able to do it alone, without your help and love. Your love helped me survive. I am grateful to all who pray for me and this is very precious to me,” the patriarch said.

His Holiness Pat. Ilia is the most beloved and most trusted man in all of Georgia, and the cathedral was filled with hundreds of faithful clergy, monastics, and laity, who all came to express their love and gratitude to their beloved archpastor.

Congratulations were received from His Holiness Patriarch Kirill of Mosow and All Russia. “Your Holiness and Beatitude, I heartily congratulate you and all of Georgia with this important Church day,” Pat. Kirill wrote, in a letter that was read out during the celebration.

“Your word has authority and importance for all who know and love you, and who pray for you and ask your blessing,” the Russian prelate also noted.

Representatives from the Georgian government came to congratulate the patriarch, including President Giorgi Margvelashvili.

“I heartily congratulate you on your anniversary. Four decades ago, few realized what today is clear for all—that your enthronement would become the most important phenomenon in our history over the past decades. In this period of intense and dramatic events, your wise guidance and service full of love create a solid foundation for the unity and advancement of our society. I congratulate every citizen of our country on this day and wish for them that you continue to guide our spiritual life for a long time” a statement released from the president’s administration reads.

“Your holiness, the 40th anniversary of your enthronement is a great holiday for us. I want to cordially congratulate you on this very important day. Your service is the greatest blessing of God from the spiritual point of view and a truly historic event from the secular point of view. I am grateful to you for your service to our nation and country. I wish you to serve our country for a long time. A lot of churches have been built and restored after you became patriarch. The monastic life has been restored and this is your great merit,” Prime Minister Giorgi Kvirikashvili told the patriarch after the Liturgy, InterPressNews reports.

His Holiness was also congratulated by Britain’s Queen Elizabeth II, in a letter circulated by the British embassy in Georgia.

“I warmly recall our meeting in London in 2011. I am glad that relations between our people are deepening. I wish you health and happiness,” the queen’s letter reads.

The patriarch’s enthronement anniversary was initially planned to be festively celebrated with the participation of Orthodox delegations from around the world, but the patriarch canceled the plans in May, due to the “unstable situation in the world.” Pat. Ilia II of Georgia urges emigrants to return home
He considers that only joint efforts can overcome the country’s demographic problem. Pat. Ilia announces Locum Tenens of Georgian Church
According to the charter of the Georgian Orthodox Church, adopted at an extended Church council in 1995, a locum tenens governs the Church in the event of the death of the patriarch, his abdication from the patriarchal throne, or other circumstances that render the patriarch unable to fulfill his duties.
Comments